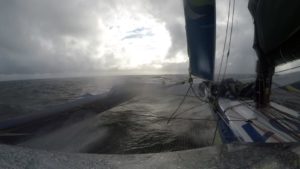 It’s ‘hot’ out there in the South Atlantic as the Volvo Ocean Race boats and the giant MACIF trimaran share the same waters – all with the same objective – that being to sail as fast as possible.

The Volvo boats will soon be ‘turning the corner’ for Cape Town, and when they do we are likely to see some big performances and high-numbered days runs coming from them.

However the Volvo sailors must be in awe of Francois Gabart who yesterday (Tuesday) beat the record of distance travelled alone in 24 hours when he recorded 826nm from Monday to Tuesday afternoon.

Aboard his trusty trimaran MACIF, François Gabart is the first solo sailor ever to pass the 800 miles mark in 24 hours. His average speed was 34.4 knots (63kmh for the landlubbers!).

“I am delighted. Records are made to be beaten, that’s how we progress” said Gabart. “The sensations at these speeds are quite extraordinary, the boat is flying, it’s a mix of power and lightness”.

And not one to rest on his laurels, Gabart immediately stated this: “Now, this is not the priority objective, the idea is to finish this world tour …”.

They may well more records to come soon, so watch this space.