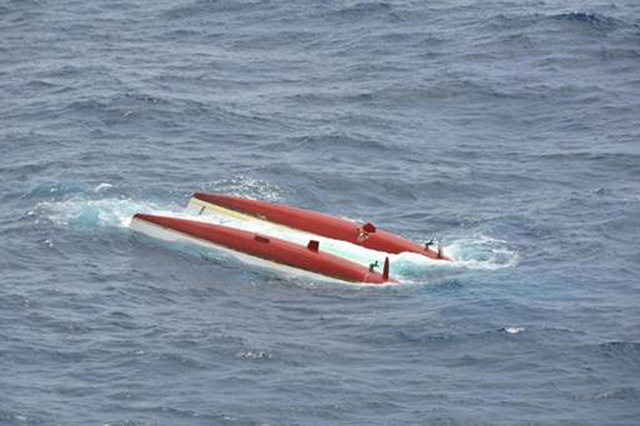 The Llama Lo, capsized and abandoned off the Transkei coast washed up as wreck on St Helena Island recently.
pic by NSRI

I should never be amazed by the power of the sea having spent so much time sailing, but there are times when one has to be in awe of how the ocean currents work, and how they take abandoned boats long distances over long periods of time and deposit them in places no-one would ever expect.

This is exactly the situation with the catamaran Llama Lo which, in October 2015, was sailing from Durban to Cape Town with Port Elizabeth as their next port of call. They struck a whale while sailing in rough seas and strong winds at a speed of between 10 and 12 knots off the Transkei coast, causing one hull to be holed.

The fact that the wreckage came to rest on a small island in the South Atlantic ocean is even more remarkable.

The rest is history as they abandoned the vessel and were later rescued by a container ship. 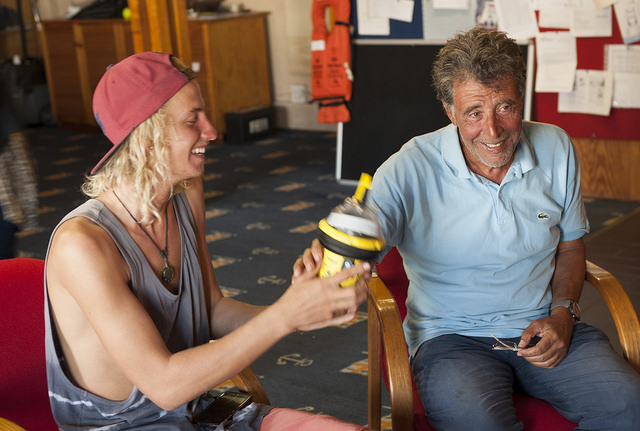 Kyle Castelyn and Jean Sitruk having been rescued.
pic by NSRI

The full story, which is much more dramatic than above, can be seen below, but firstly thanks need to be given to John Titterton of Cape Town who, having be sent pics of the wreck from St Helena Island, worked tirelessly to identify the vessel. He was ably assisted by Ian Johnson who lives on St Helena Island.

They have managed to contact crew member Kyle Castelyn who positively identified the vessel.

The French bulk carrier CMA CGM Rossini brought the two survivors of the Catamaran Llama Lo to Cape Town arriving this morning just after 09h00 and going to anchor outside of the Port of Table Bay. 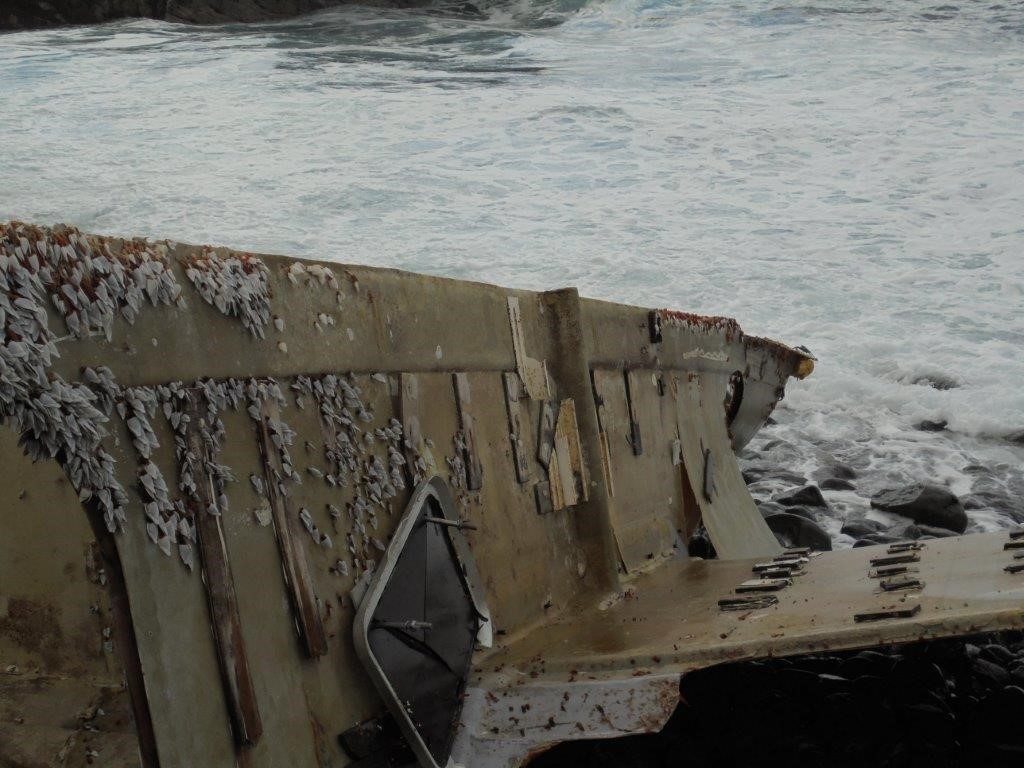 The Transect National Ports Authority requested NSRI Table Bay to fetch them off the ship and they were brought ashore to the NSRI Sea Rescue Base at the V&A Waterfront aboard the sea rescue craft Spirit of Vodacom.

It was en emotional reunion for Kyle and his family and Jean spoke with his family in France.

Sailing from Durban to Cape Town and next Port of call Port Elizabeth they had struck a whale while sailing in rough seas and strong winds at a speed of between 10 and 12 knots off-shore of the Transkei coast causing one hull to be holed.

On auto-pilot they heard loud bangs and felt the yacht swing to one side when they looked they saw a whale swimming alongside the yacht.

Immediately the yacht took on water and despite putting out a VHF marine radio Mayday distress broadcast on their marine radio VHF emergency frequency Channel 16 they were forced to abandon ship, taking whatever they could grab, before their craft listed and capsized within minutes at around 18h00 on Saturday 17th October.

They opted to go on one of two rubber-ducks they had onboard, a decision they have strongly defended as their best chance of survival considering the sea state at the time.

They activated their EPIRB (Emergency Position Indicating Radio Beacon) and then hung on and rowed pointing the rubber duck into the sea in rough seas with strong winds and up to 5 metre swells. 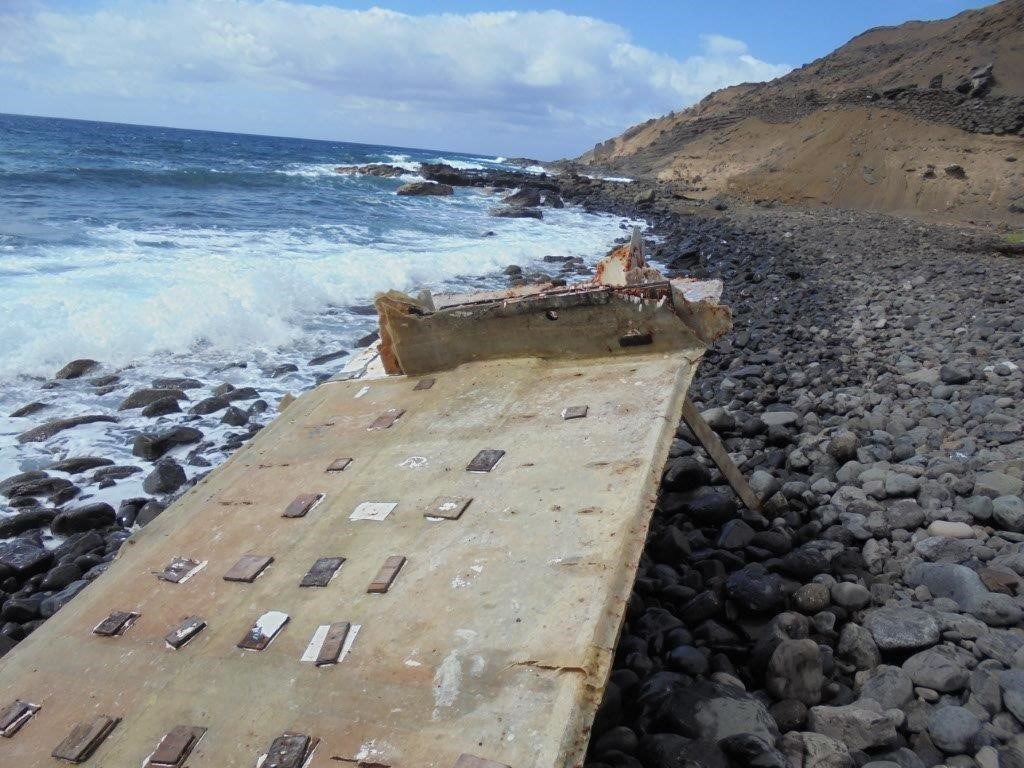 Winds blew them apart from their capsized boat. The life-raft and the other rubber-duck were blown away from them in the strong winds.

They were about 50 nautical miles off-shore of the Transkei.

They had noticed ships in the distance using spotlights during the night, but too far away to see them, but it reassured them that a search had most likely been commenced but they were still a bit uncertain.

They set off a red distress flare but that went unnoticed.

In the early hours of Sunday morning they had capsized on the rubber-duck losing most of their supplies and belongings overboard, but they were able to get some rest on the upturned hull of the rubber duck before it was again capsized the right way up forcing them again to paddle to keep the bow headed into the onslaught of waves.

At sunrise they saw ships in the distance, but the ships were too far away to see them.

During an extensive ongoing search the ship CMA CGM Rossini located them, at last light at around 18h25 on Sunday, 55 nautical miles off-shore of Kidd’s Beach, East London.

They described hearing the ship sound 3 fog horn blasts and flicker spot lights in their direction after appearing to stop dead in the water some 3 nautical miles away from them and that was their first feelings of hope that they had been spotted.

They praised the Captain and crew of CMA CGM Rossini for excellent seamanship manoeuvring the 277 metre ship closer to them before taking them onboard. 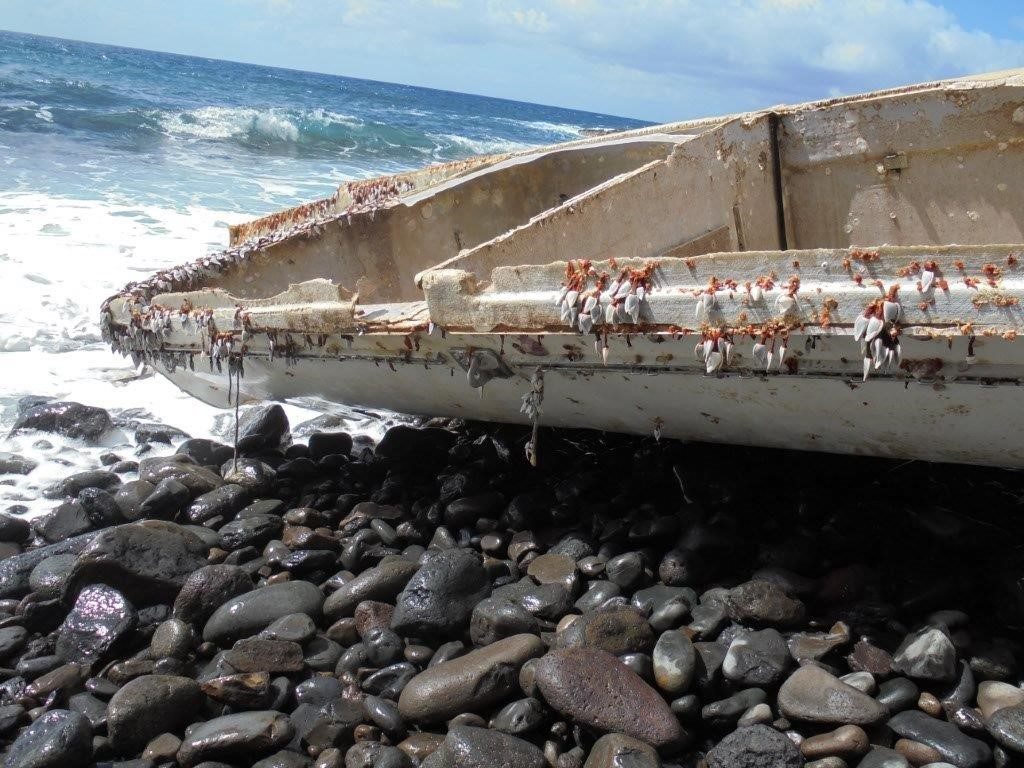