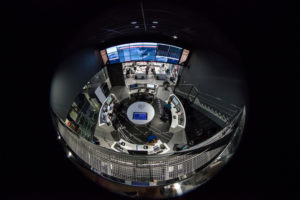 Meet the Volvo Ocean Race Experts. They work 24/7 in Race Control to keep you up to date with what’s happening on the water – and thanks to a dedicated new Twitter account, fans can be closer to the action than ever before in 2017-18.

They’re the nerds behind the numbers – the people behind the position reports – and now they have their very own official Twitter account.

Introducing the Volvo Ocean Race Experts (or @RaceExperts, as we’re calling them now). They’re the team of sailing pros who work 24/7 in Race Control during each leg – and when it comes to weather previews, navigational analysis and race data, they’ve got all the details.

As the fleet racks up 83,000 kilometres around the planet over the next nine months, they’re going to be the link between what’s happening on the water, and the fans on shore – staying in constant contact with the boats as they conquer the world’s most remote oceans.

“I’m delighted with the quality of the Race Experts team we’ve assembled for this edition of the Race,” said Gonzalo Infante, Meteorologist and Race Control Manager.

“We’ve put together the perfect mix of youth and experience, combining solo sailors with media experts, and all of the guys come from a professional racing background. They’ve been there and done it – the level of expertise inside Race Control is second to none.”

Got a question about the tracker? Want to know more about a certain sail combination, or a split in the fleet? Follow and tweet @RaceExperts – anytime.

So just who are the experts behind the excel sheets? Here’s a quick introduction to your new best friends. Be nice – you’ll be spending a lot of time together over the coming nine months.

Sam Matson
From: Devon, UK
Expertise: BSc Navigation & Maritime Science
A graduate of the Artemis Offshore Academy, Sam is a solo sailor who made his debut in the Solitaire du Figaro in 2014, where he took the best British result of the regatta, and has since competed in two additional Solitaire du Figaros and the Transat AG2R, whilst gaining experience in Class 40 and IMOCA 60 racing. He also won his class in the Fastnet Race in 2015 – racing double-handed with his now-boss, Gonzalo!

Will Harris
From: Surrey, UK
Expertise: BSc Oceanography with Physical Geography
Will has represented Great Britain at World, European and National championships and in 2009 became national champion in the Laser 4.7 class. He moved to offshore sailing when he was selected to join the Artemis Offshore Academy in 2013 and won the rookie division in the 2016 Solitaire du Figaro, Solo Concarneau and Solo Maitre Coq.

Peter Tans
From: Groningen, the Netherlands
Expertise: Navigator, Electronics Engineer
Peter knows the Volvo Ocean Race very well having competed as a crew member three times, in 1989-90 onboard Equity & Law II, 1993-94 with Brooksfield and finally in 1997-98 with BrunelSunergy. Since then, he’s become an expert in marine, navigation and communication systems, working in three America’s Cup campaigns and one Volvo Ocean Race with Green Dragon – the perfect introduction to life in Race Control!

Rick Tomlinson
From: Isle of Wight, UK
Expertise: Offshore racer & onboard media expert
Rick is one of the sport’s most renowned and multi-award winning photographers, having made his name capturing the Southern Ocean at its most treacherous whilst racing as a crew member in the Whitbread Round the World Race. He has four editions of the race to his name, onboard Drum in 1985-86, The Card in 1989-90, Intrum Justitia in 1993-94 and EF Education/Language in 1997-98 – and is often cited as inspiring the role of the Onboard Reporter in the modern era. More recently, Rick has twice been Official Photographer for the Volvo Ocean Race, and has been commissioned by the likes of National Geographic.

Conrad Colman
From: Auckland, New Zealand
Expertise: Round-the-world racing, weather analysis and performance data Conrad made global headlines in early 2017 whilst competing in the Vendée Globe. Having dismasted in the middle of the Atlantic, he was forced to complete the solo race under jury rig, making painfully slow progress to the finish line, all at a time when his rations had run out. He became the first Kiwi to finish the event – his never-say-die attitude winning him fans around the world.