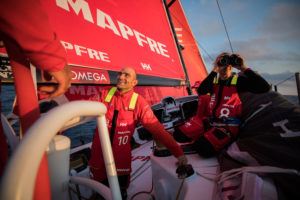 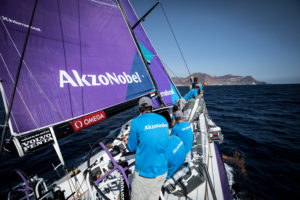 The Spanish MAPFRE team won the Volvo Ocean Race Prologue Leg on Wednesday, holding off a late charge from Team Brunel after Race Management shortened the course, converting the compulsory gate at Cabo de Gata into the finishing line.

For skipper Xabi Fernández and his team, it’s a continuation of the success MAPFRE found on Leg 0, where the team was the overall winner of the four-stage leg.

“It’s all good on board,” Fernández said shortly after crossing the ‘virtual’ finishing line.

“It’s been really good training. It’s been a close race and I’m really happy with the team’s performance.”

Close behind the winner was Team Brunel.

Both of the leading teams owed their performance in large part to a decision they took early in the leg, shortly after the start, when they hugged the coast of Portugal in contrast to the rest of the fleet further offshore.

The coastal route paid in a big way, and less than 24-hours after the start, MAPFRE and Team Brunel held a decisive lead over the fleet, turning this into a two-boat race for victory.

But the chasing pack had a hard-fought battle for third place, with team AkzoNobel squeaking in just ahead of Turn the Tide on Plastic and Vestas 11th Hour Racing.

“We had a very good race, very enjoyable. Good close racing,” said skipper Simeon Tienpont. “We were in the game all the way. MAPFRE and Brunel went a different route which worked out for them, but with the rest of the fleet we took the best we could out of it and I’m very confident after finishing in third place.”

At the back of the pack, Dongfeng Racing held off Team Sun Hung Kai/Scallywag.

With the shortened course putting the finishing line some 120 miles away, the teams will now motorsail to Alicante, the start port of the Volvo Ocean Race. The event Race Village opens Wednesday evening, with entertainment, ceremonies and fireworks.

Leg One of the Volvo Ocean Race starts on 22 October.