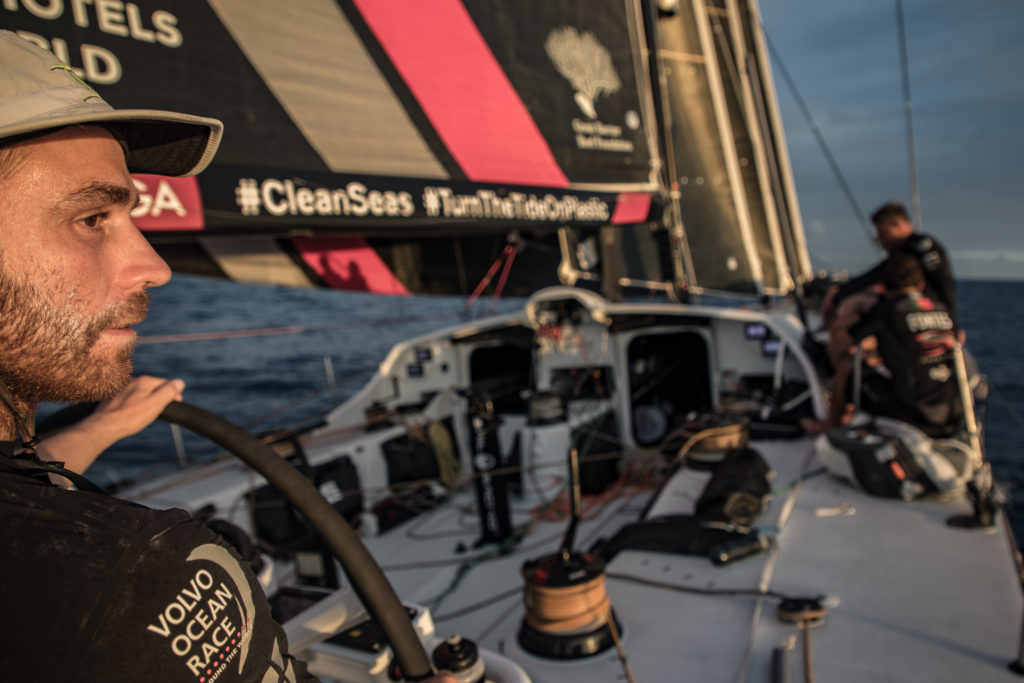 The past week has been very interesting as the fleet positions have changed – and changed again. Conditions are tough and relentless out there, with big gains and losses having been made.

Interestingly the two top placed boats overall, MAPFRE and Dongfeng, slipped way off the back of the bus for several days, and looked dead and buried. But this is a game of never giving up, having the courage to choose a course and stick with it, and being bold enough to take some risk if, and when, necessary.

This week has had it all. 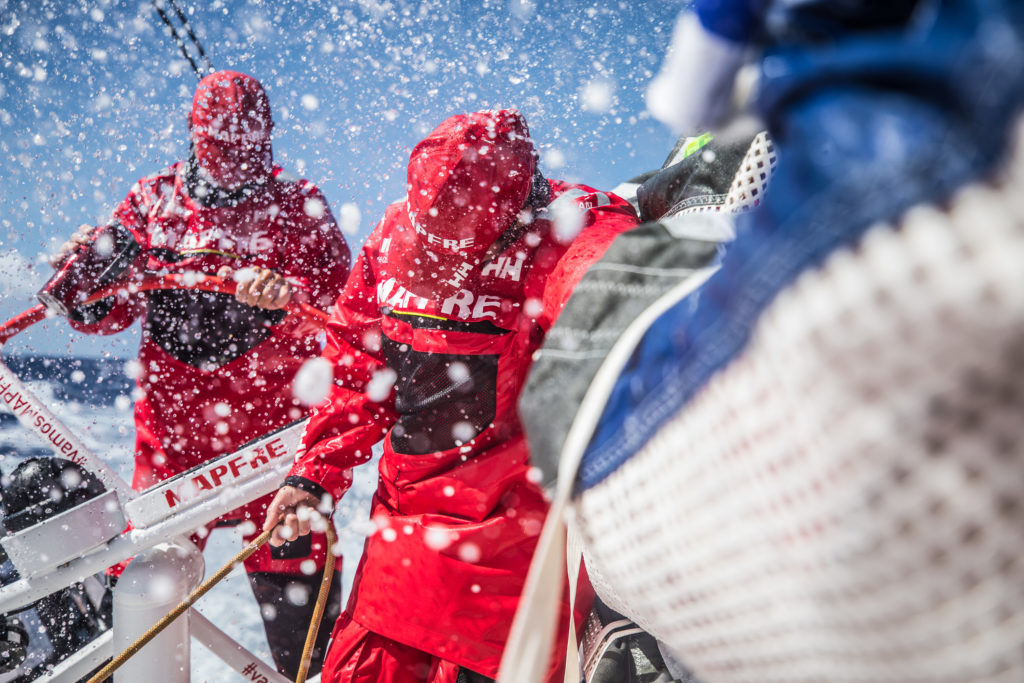 On board MAPFRE.
pic by Ugo Fonolla/Volvo Ocean Race

Just 24 hours ago MAPFRE and Dongfeng looked buried, but this morning they look to have bounced back quite well, yet still have some catching up to do.

SHK/Scallywag is in the lead, but the chasing pack is sailing faster as the fleet begins to compress with another challenging transition ahead – so it’s anyones game.

While SHK/Scallywag has made good on its westerly route to grab an impressive lead over the past 24 hours, the fleet is compressing, and as of yesterday (Sunday) afternoon, it’s the chasing pack enjoying stronger winds.

The Scallywags have to be pleased with last 24 hours as they’ve gone from trailing team AkzoNobel by 55 miles to sailing around them to a 10 mile lead. 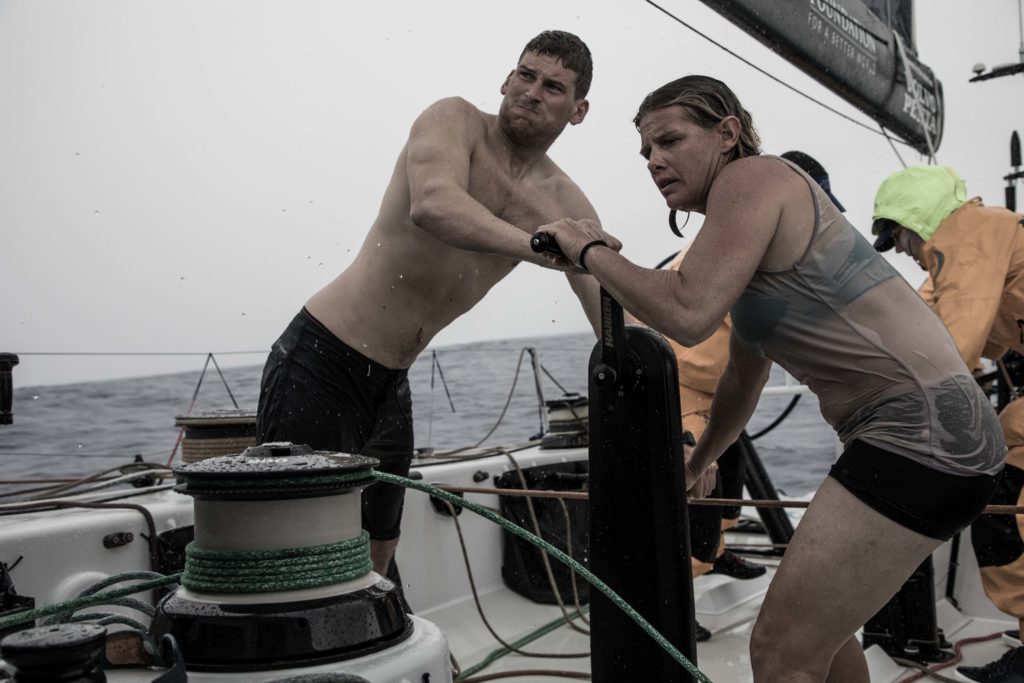 On board Turn the Tide on Plastic. Henry Bomy and Liz Wardley get called to tack mid shower.
pic by James Blake/Volvo Ocean Race

“You’re always pretty pleased when a sked comes in and you’ve rolled over the lead boat,” said Scallywag navigator Libby Greenhalgh this morning.“It was a little bit of a surprise. We had seen there was a big cloud they might be in and we might make a few miles, but to punch into the lead is nice.

“The cloud activity has been huge as we saw on Leg 4. We had a bit of a blackout on satellite imagery for a couple of days which I’m sure saw some people in different positions in the fleet struggle in order to work out the best way out of the position they were in. But we’ve been pretty good and we’re trying to avoid the clouds as best we can.” 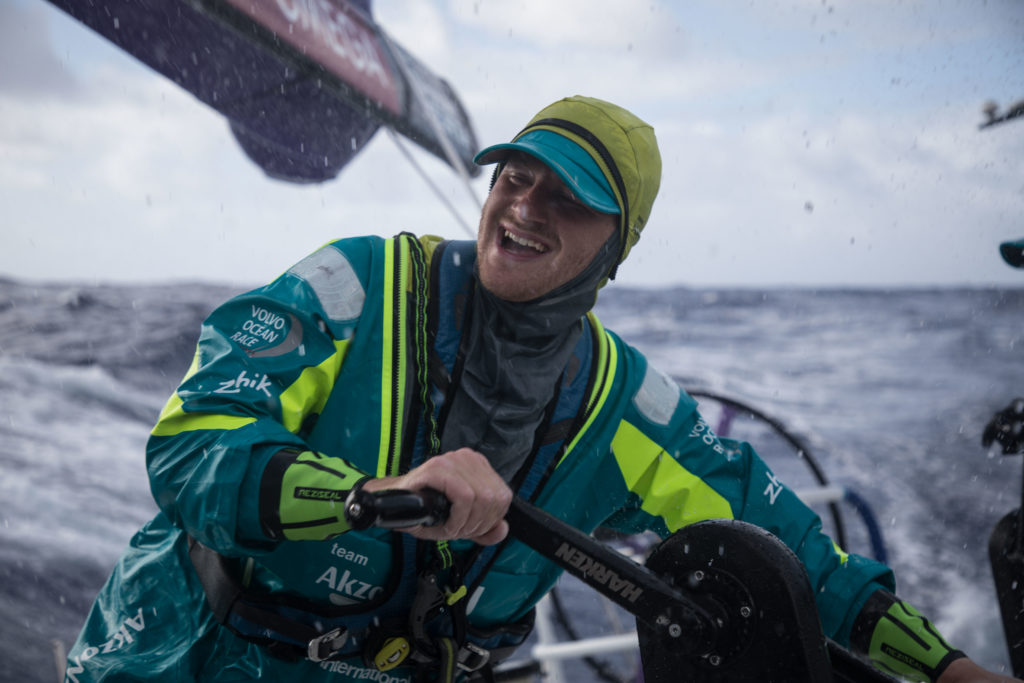 On board AkzoNobel, Nicolai Sehested in action.
pic by Rich Edwards/Volvo Ocean Race

But it’s not all smooth sailing. Just hours after that conversation, at 1300 UTC on Sunday, wind and boat speed for Scallywag was down to 5 knots. The rest of the fleet is now posting closer to 15 knots on both counts meaning the fleet is compressing. This is good news for those at the back, including overall race leader MAPFRE, and Dongfeng Race Team who is second placed on the leaderboard. The power couple had trailed by as much as 280 miles on this leg.

“We’re nearly in last, with MAPFRE, which is unusual, but we deserve it,” said Dongfeng skipper Charles Caudrelier. “We’ve had some bad decisions.

“But the spirit is still good. The leg is still very long and there is a very tough part for the next few days, very complicated. So there is still hope. We need to work well to reduce the gap and maybe have an opportunity at the end.”

It’s much the same on MAPFRE.

“We’re all human; it’s frustrating to end up right at the back here and with a massive gap to the leaders,” said Blair Tuke. “But there’s a long way to go and there is a big light air period ahead, so we’re optimistic and we’ll keep pushing hard, but that last transition from the trade winds was really tough for us…”

Tuke and his team can take heart from the fact the deficit is already down to 160-miles, and narrowing with each hour.

“Luckily for us, it looks like we have an opportunity to get back into the guys just ahead of us at least. It would nice to have another crack at it. We have done some good sailing this leg, but we’ve struggled in the transitions. We’re hopeful and positive.” 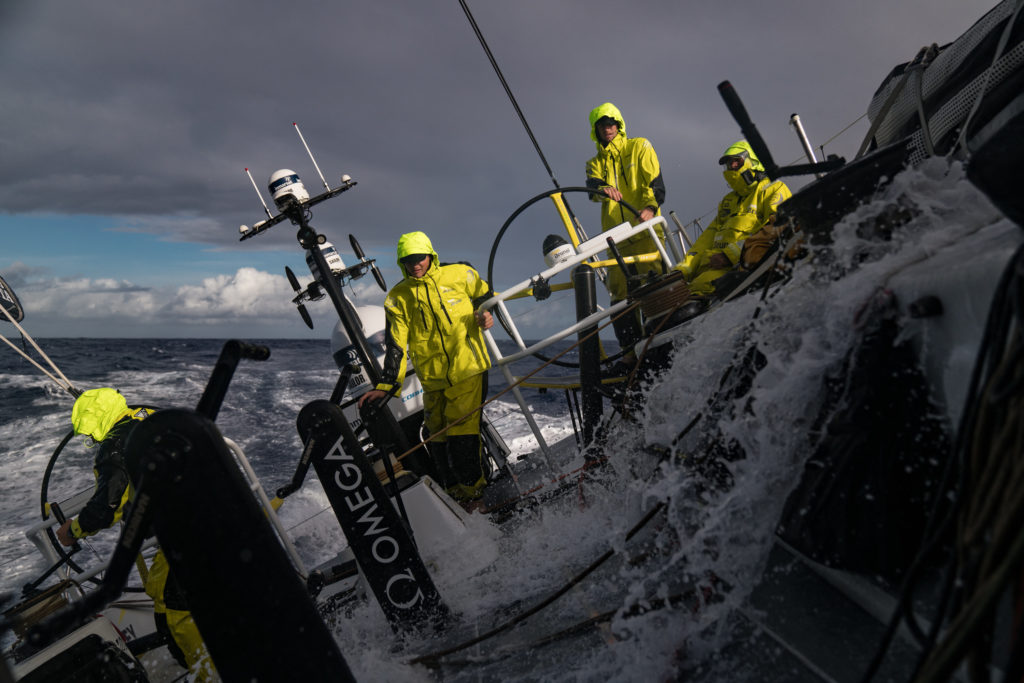 On board Brunel and doing the work are Louis Balcaen, Alberto Bolzin, Kyle Langford. Same good old hatch picture as always. But at least it gives a good outlook of the conditions on deck, while the photographer remains dry.
pic by Yann Riou/Volvo Ocean Race

As mentioned above, the fleet was without access to download weather files due to a problem with the satellite connection in the area. But Inmarsat has resolved the issue with the satellite that handles communications over the Asia-Pacific area.

The outage meant contact between Race Control and the boats was reduced to position reports and short text messages – enough to ensure safety, but not to receive media files or send weather files.

But with full service restored, the fleet is grateful for the work done to resolve the issue, as Team Brunel’s Bouwe Bekking notes:

“We are back in action having our internet connection again after a service call with the Inmarsat satellites. Yes, these also have to get serviced! You just realize how much you depend on the net. Contact with home, position reports, downloading the all so important weather info…

“The last part, the weather files, haven’t been very useful at all the last few days. The massive super cells / thunder storms are running the show…

“But just to go back to Inmarsat and the Cobham communication equipment. Just hats off to them, they give us remarkable service and outstanding equipment. It is amazing for a simple yachtie like me to see how this all works. They show you these drawings how it functions… boat sends signal or message to satellite, then satellite sends it race back to earth, you just don’t realize through how many loops that message has gone, not to mention the zillion of hours both companies have spent to get their products to where they are today. And then they still have the drive to make it better… So chapeaux – hats off to you!”