Volvo Ocean Race. Back to business in the South Atlantic 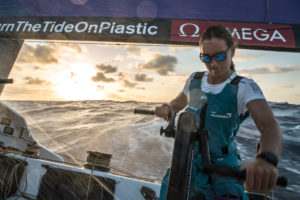 On board AkzoNobel. Emily Nagel- the youngest female sailor in the race is ‘manning the pumps’.
Photo by James Blake/Volvo Ocean Race

With Monday’s Equator crossings already a fading memory for the Volvo Ocean Race crews, gone too is any respite, however brief, from the relentless action that’s characterising the second leg.

Many sailors awoke on Tuesday sporting new haircuts or with the faint whiff of days-old food about them, or both.

These were the only reminders of the momentary reprieve that came in the form of the traditional ceremonies to induct first timers into the court of King Neptune.

However stomach-churning, they were a welcome distraction – but now it’s back to business as the teams resume their epic battle in the South Atlantic.

After being largely untroubled by the Doldrums, the seven teams were making between 16 and 18 knots in the south-easterly trade winds so typical of this part of the South Atlantic.

With speeds almost identical throughout the fleet, each crew’s high command were busy poring over satellite images in an to predict the next change in the trades that might give them the slightest of advantages.

“It’s nice to lead the fleet but it’s not easy,” said Charles Caudrelier, skipper of leg leaders Dongfeng Race Team, who had a seven-mile jump on MAPFRE, their closest rivals in terms of physical distance, at 1300 UTC.

“We’re in inshore mode. The red boat [MAPFRE] is very fast. It’s a very hard job to stay ahead.” 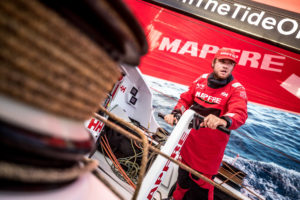 MAPFRE might have dropped to third on the tracker because of their westerly position, slightly further from the next waypoint than Vestas 11th Hour Racing, but skipper Xabi Fernandez said it would pay dividends.

“We have eye contact [with Dongfeng] but the good news is that the both of us are leaving the fleet behind a bit,” he said.

Five miles behind Vestas, Team Brunel were applying the pressure. Both teams have managed to put around 20 miles between them and fifth-placed team Akzonobel. 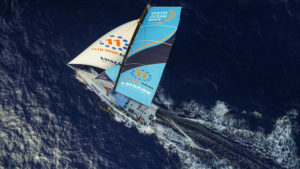 “Having a good battle with Team Brunel,” Simon Fisher tweeted from Vestas. “Just can’t seem to shake them but we will certainly keep trying. Fighting for every inch.”

Sixty-five miles behind the leaders Turn the Tide on Plastic were consumed with their own scrap with Sun Hung Kai/Scallywag. Both crews were practically neck and neck at the latest position update.

“Scallywag’s on the horizon. Game on for the next 3,200 nautical miles,” said Liz Wardley, Turn the Tide on Plastic’s boat captain, in her latest dispatch.

Although the sailing is relatively straightforward now, it is about to get more complicated.

The St Helena High, the huge high pressure system that normally sits off the west coast of Africa is practically non-existent at the moment due to a large low pressure system dominating much of the South Atlantic.

But over the next week the depression will lessen, and the St Helena High will start to reassert itself.

Traditionally the quickest route takes the fleet very far south, below the latitude of Cape Town, to skirt underneath the anticyclone.

However, a tactical gamble could be to take a short cut through a narrow corridor of pressure as the anticyclone reestablishes itself.

It could slash 650 miles off the distance – well over 24 hours of sailing – but as with all betting there’s a chance it might not pay off.

Will any of the teams feel bold enough to roll the dice? Only time will tell.