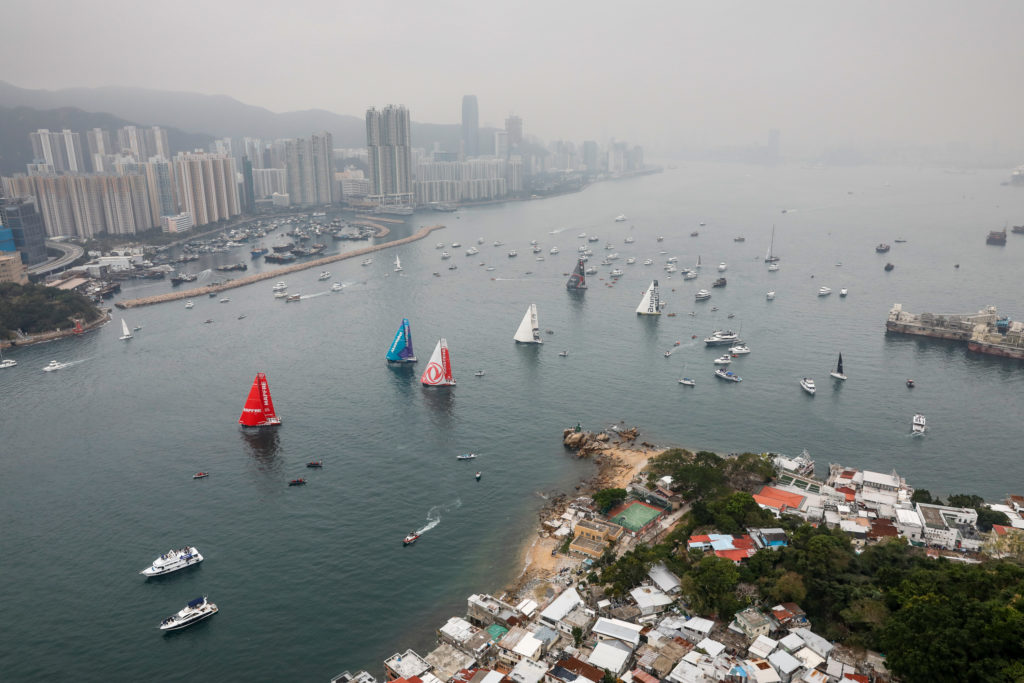 Aerial view of the fleet in very light airs for the Around Hong Kong Island Race in Hong Kong.
Ainhoa Sanchez/Volvo Ocean Race

This weekends racing was a battle for top dog’ status between Dongfeng and Mapfre the two top contenders in this round the world race.

After the HGC In-Port Race in Hong Kong, despite finishing second overall, and the series leader MAPFRE finishing fourth, Dongfeng vaulted to the top of the table.

But the overall honours reverted back to MAPFRE after she won the around Hong Kong Island Race.

These two have been the top two teams, and trade blows at every available opportunity. So it is still game on with the rest of racing going to be interesting to see who is finally ‘top dog’. 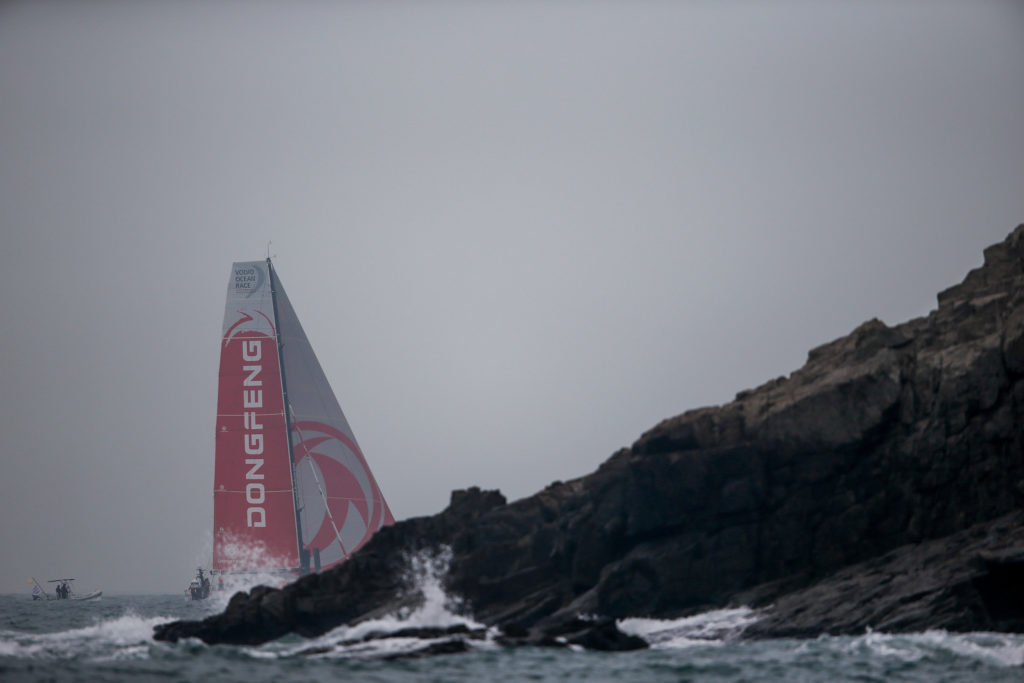 HGC In-Port Race Hong Kong
Team AkzoNobel took the win on a challenging afternoon on the waters of Kowloon Bay.

The wind during race time was a 6 to 10 knot Easterly, but it was very shifty and puffy, and with a tidal current running on the race course, it was a difficult day for the tacticians.

“We had a fantastic race, pretty exciting. We planned to sail our own race today. It was tricky enough with the tide and the windshifts,” said team AkzoNobel skipper Simeon Tienpont.

“The team sailed an unbelievable race and the guys in the back of the boat played the tactics very well… It’s good when things come together. It’s a nice reward for all the effort the team has put in.”

Dongfeng Race Team finished in second place, with Team Brunel third. The two swapped places on the third lap of the course after a solid upwind leg by Brunel gave them the lead, but the Dongfeng crew fought back on the run to secure second place.

A fourth place finish on Saturday by the series leader MAPFRE means Dongfeng vaults to the top of the table.

Hong Kong’s hometown heroes Sun Hung Kai/Scallywag had a fantastic start, but fell back and battled to a fifth place finish over Turn the Tide on Plastic. 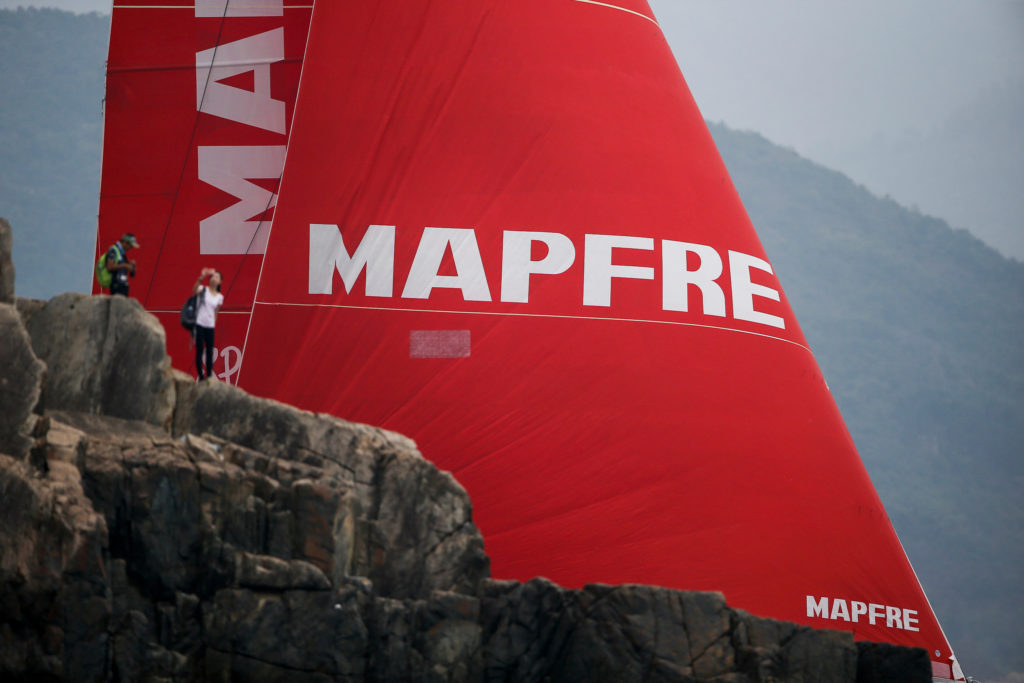 Around Hong Kong Island Race
It was a challenging day for the Volvo Ocean Race teams as they tackled the Around Hong Kong Island Race on Sunday with a generously sized spectator fleet on hand to cheer them on.
Light and variable wind shortly after the start allowed the leading boats to break away as they found new wind pressure first. But it didn’t mean opportunities for passing later in the afternoon were completely closed off.

MAPFRE had the best start in the fleet and eked out ahead in light winds. Three teams broke the line early and needed to restart, with Team Brunel, Turn the Tide on Plastic and Sun Hung Kai/Scallywag all turning back.

It put them at an immediate disadvantage, but while Brunel had the best re-start, it was Turn the Tide on Plastic who moved up the fleet to challenge the leading pack over the next 20 minutes.

However as the race progressed, MAPFRE and Dongfeng Race Team found the new favourable wind first and built a commanding lead over the others.

“With these inshore races you never know, because just as you can have the advantage one moment, the next you can lose it,” said MAPFRE navigator Juan Vila. “Fortunately today it was more of a race in which the one in front always seemed to have better pressure. The transitions have also gone a little better for us and of course, the start and the moments afterward were key.”

“It was very tricky conditions today, but we had a lot of good advice from local sailors and it helped us a lot,” said Dongfeng Race Team skipper Charles Caudrelier. “So I think we prepared it very well and the result is there, so that’s good.”

Behind the leading pair, it was team AkzoNobel and Turn the Tide on Plastic battling for third place early. But a the teams rounded the southern shore of the island, Sun Hung Kai/Scallywag and Team Brunel slipped through in the middle of the channel with better wind. 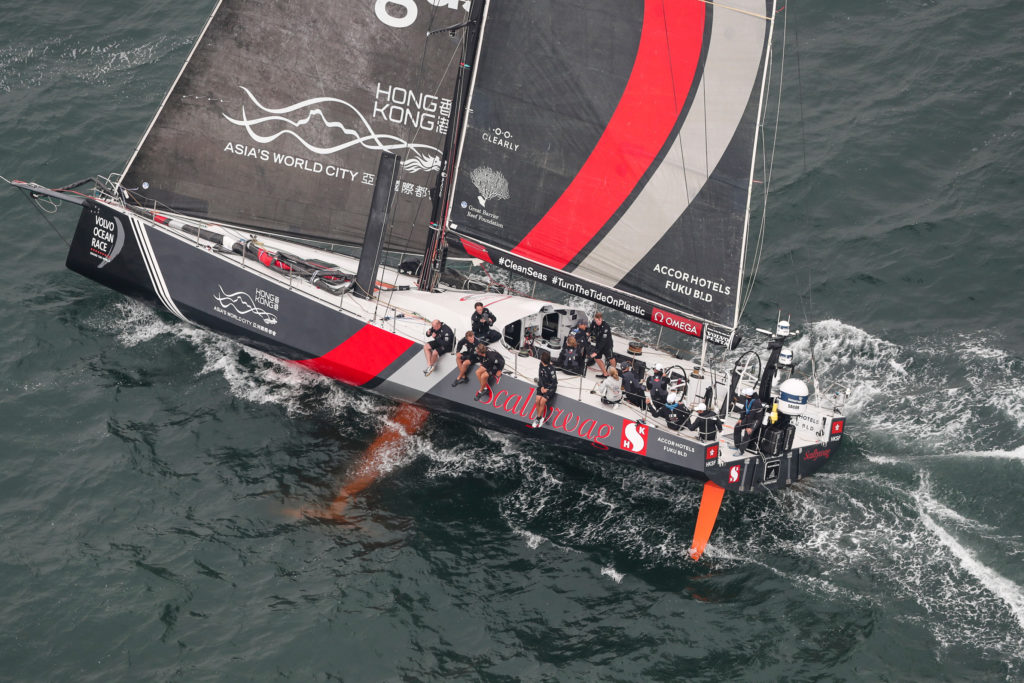 Local favourite Scallywag went from being last across the starting line to a third place finish with Team Brunel just a couple hundred metres back to take a popular podium result.

That left AkzoNobel, who won Saturday’s HGC In-Port Race Hong Kong to take fifth place in front of Turn the Tide on Plastic, who had a frustrating weekend trailing the fleet in both races.

When MAPFRE crossed the finish line, they were flying a protest flag, but later informed the Race Committee they would not be following through with a protest, making the results on the water final.

Sunday’s results mean Dongfeng Race Team has the best overall score on the weekend after two second place finishes. The team will claim a full 7 points from the Hong Kong series which pulls it into a tie on the overall In-Port Race Series Leader board with MAPFRE, both sitting on 25 points. Dongfeng Race Team is ranked first based on winning the most recent series in Hong Kong.

“It is a very good result for us,” Caudrelier continued. “We are in the same position as the MAPFRE crew which is full of inshore specialists, so I think we can be proud of the team’s performance.”