Few things are straightforward when racing across the Atlantic Ocean. There are safety concerns at every turn, from storms and lightning threatening everything above water to unseen floating objects (“UFOs”) threatening the parts underwater.

Contrary to that theory, the 13 yachts participating in the Transatlantic Race 2019 have had surprisingly straightforward conditions in their first 24 hours at sea.

“The first night was fairly easy,” said David Askew, co-owner of the VO70 ‘Wizard’. “We’ve been close reaching in 18 to 20 knots of wind from the south and making 13 knots boatspeed.

“The weather has been very nice,” Askew continued. “We had light rain on and off all night. This morning it cleared and has stopped raining. The breeze has been very steady, we’re even seeing patches of blue sky. It’s also been warmer than most everybody expected.”

“Twelve hours in and we’re not so busy,” said Ehler. “We’ve been lucky that the breeze has held out of the south more or less, giving us reaching, straight-line conditions as we head east. It’s certainly nice to be going fast and in the right direction with flat water, albeit a little soggy!”

If the fleet had one complaint from the first night at sea, it was the rain. 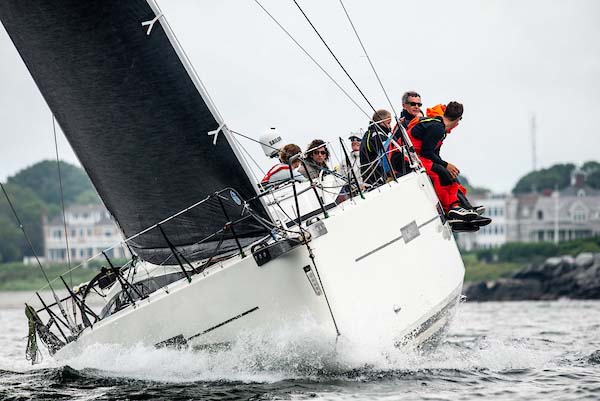 “At one point, it rained so hard we could fill our water bottles from the flood pouring off the mainsail,” said Chris Hanson from ‘Pata Negra’, who served up a helping of chicken stir fry, “not freeze-dried!” to help warm the bones.

After 24 hours of racing, the fleet is straddling the rhumbline sailing a mostly easterly course. David Witt and the supermaxi ‘SHK Scallywag’ lead, having covered approximately 317 nautical miles since the start and with 2,641 nautical miles to the finish. Constantin Claviez’s Charisma is the tail-ender, some 184 nautical miles astern of ‘SHK Scallywag’, but hardly off the back end of the fleet.

While the first day may have been straightforward, the next few days look anything but. The fleet is predicted to sail into the first of what could be a few encounters with zones of no wind. As such, the fleet seems to be setting up to take advantage of the Gulf Stream, that conveyor belt of water that could propel them past Point Alpha, the ice zone limit, and into free sailing on the open course.

“We’re not feeling any effect from the Gulf Stream yet, but it’s something we are going to try and take advantage of in the next day or two,” said Askew. “It’s kind of one thing we’re trying to set-up for, as are the other boats as well.”

One boat in particular is Jean-Pierre Dick’s ‘The Kid’, which is the most southerly boat in the fleet. ‘The Kid’ passed the latitude of 40N by the 12h30 UTC position report earlier today. Dick’s experience in open ocean sailing is unparalleled, so his move is one to watch in the coming days. 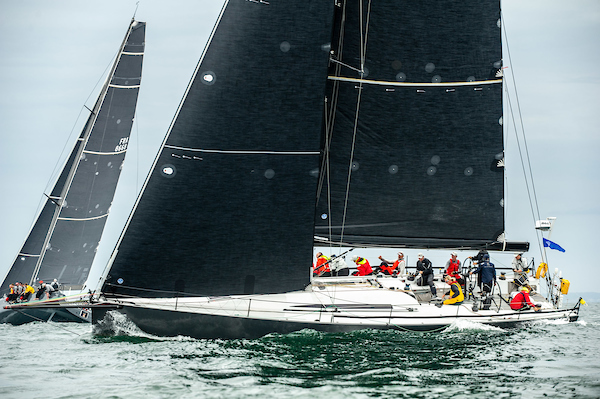 Triple Lindy has been plagued with problems.
pic by Paul Todd/OUTSIDEIMAGES.COM

Aboard Joe Mele’s ‘Triple Lindy’, the pre-race troubles they experienced seem to have followed them onto the racecourse. In the days leading up to the start ‘Triple Lindy’ was in and out of the water five times attending to troubles with the rudder bearings, satellite phone and engine issues.

Shortly past 06h00 UTC this morning ‘Triple Lindy’ temporarily suspended racing due to troubles with the alternator and is returning to Newport to make repairs. No one on board is injured and the boat and rig are structurally sound, but the lack of an alternator is an issue that has to be fixed. ‘Triple Lindy’ intends to rejoin the race once repairs are complete.

Back aboard ‘Pata Negra’, Hanson described the crew as settling into their watch system and enjoying life away from land.

“The run up to this event is always stressful,” said Hanson. “There’s a hell of a lot to do in ensuring the team and boat are ready for 2-3 weeks at sea safely. But at the start I (along with others on the crew) could feel the stress of onshore life just disappear. Offshore racing is not everyone’s cup of tea, but the incredible feeling where you feel a team building stronger together, collaborating and focussing on a common task is amazing. With the vast experience on this boat that has come as far as Australia, Chile (sort of!), France and the UK, you can feel a want to win – we’re definitely focussed on it.”