Transat Jacques Vabre. 28 Knots is Fast, But Just A Stretch for the New IMOCA Beasts. 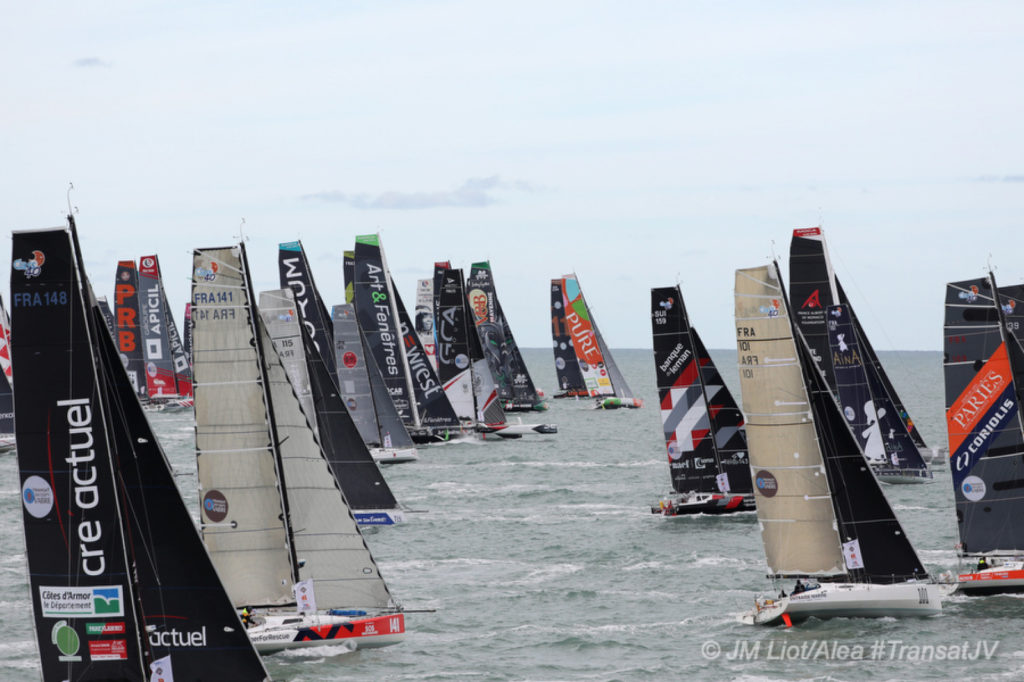 59 boats started the Transat Jacques Vabre on Sunday afternoon, a 4350nm race Le Havre, France, to Salvador, Brazil, a demanding two-handed race in every sense for Class 40, Multi 50 and IMOCA’s.

All eyes are on the IMOCA class as a string of radical new foiling boats are competing, including ‘Hugo Boss’ with Alex Thomson and Neal Mc Donald competing together for the first time.

The IMOCA’s have been described as “extraordinary machines” as they are 18.28 m long with 29m masts above them, three tonnes of lead below them and foils that curl ever higher.

“Archimedes is retiring!” Roland Jourdain (‘Maître CoQ IV’) aka Bilou, said. “On a racing boat, the trade-offs are always complex, but until now, we were on common ground. The foils have re-opened the box, and that means many more hours of design.”

The latest generation of foilers took 35,000 hours to give birth too, without always being able to distinguish between design and construction. One thing is certain, the teams’ design offices have exploded. The boats are loaded with sensors, “but as everything is always working perfectly, the ability to feel what works has become more important again,” Bilou says. 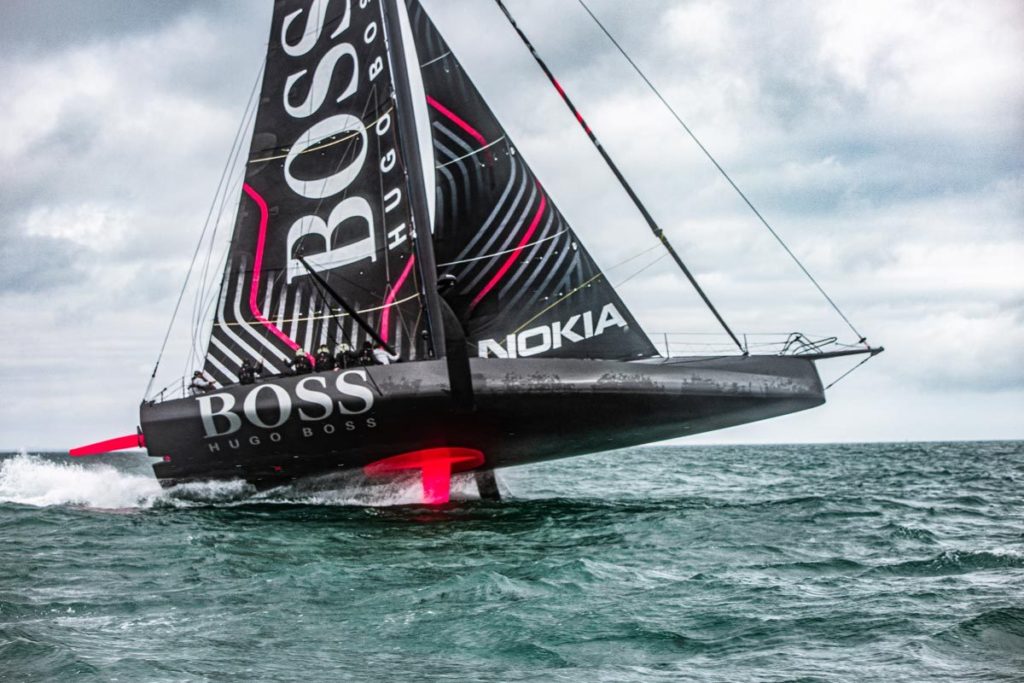 That is a paradox pushed to its peak with the arrival of new boats where sailors are isolated from the outside by fully covered cockpits like on ‘Hugo Boss’ and ‘Apivia’.

Today’s IMOCA sail at the speed of the ORMA 60′ trimarans in the year 2000, said Sylvie Viant, the race director.

Since the start the 29 IMOCAs have been sailing at high speed and quickly made their way out of the English Channel, with three teams suffering technical problems, forcing them to carry out a pit stop. Across the Bay of Biscay, the leaders, led by Jérémie Beyou and Christopher Pratt on ‘Charal’, were keeping up a fast pace, with ‘Initiatives-Cœur’ (Sam Davies/Paul Meilhat), ‘Apivia’ (Charlie Dalin/Yann Eliès) and ‘11th Hour Racing’ (Charlie Enright/Pascal Bidégorry).

“We are in the Bay of Biscay in very strong conditions with fairly heavy seas and 20-25 knots of wind and we’re speeding along,” said Christopher Pratt. “Last night, we had to carry out quite a few manoeuvres and we both spent a lot of time out on deck. We should be getting away from the influence of the front with an area of lighter winds. It all requires a lot of work and we’re going to have to learn to keep hard at it, as it is going to be like this all the way to Bahia.”

For some though the dream of finishing, and even winning their class, were dashed as Class 40 leaders Luke Berry and his French co-skipper Tanguy Le Turquais were dismasted just 18 hours after the start.

“Around 07h00 (French time), before sunrise, we were downwind in an easterly wind under medium spinnaker with two reefs, we were not overloaded, and we were in manageable conditions,” the 33-year-old Berry said. “We pitched a few times before the last one…I was in the bunk, Tanguy (Le Turquais, co-skipper, 30) was at the helm. We don’t understand it, the conditions weren’t terrible. We recovered everything, we left nothing in the sea, the top of the mast went, then it broke in half. We managed to get everything back in the boat. We’re on our way to Roscoff. We ‘re really disappointed for everyone (involved in the project) especially since we were in the lead at that time.”

As I said earlier, all eyes are on the IMOCAs as ‘Charal’ (Jérémie Beyou / Christopher Pratt), the pre-race favourites, were reported overnight to have been flexing their foils in muscly reaching conditions, flying from the tip of Brittany across the Bay of Biscay at up to 28 knots. Fast, but just a stretch for these new beasts.

Britain’s Samantha Davies with French co-skipper, Paul Meilhat on older but upgraded ‘Initiatives-Cœur’ was in second, less than seven miles behind,

There’s a long way to go yet, and this will be a fascinating race right to the finish line. 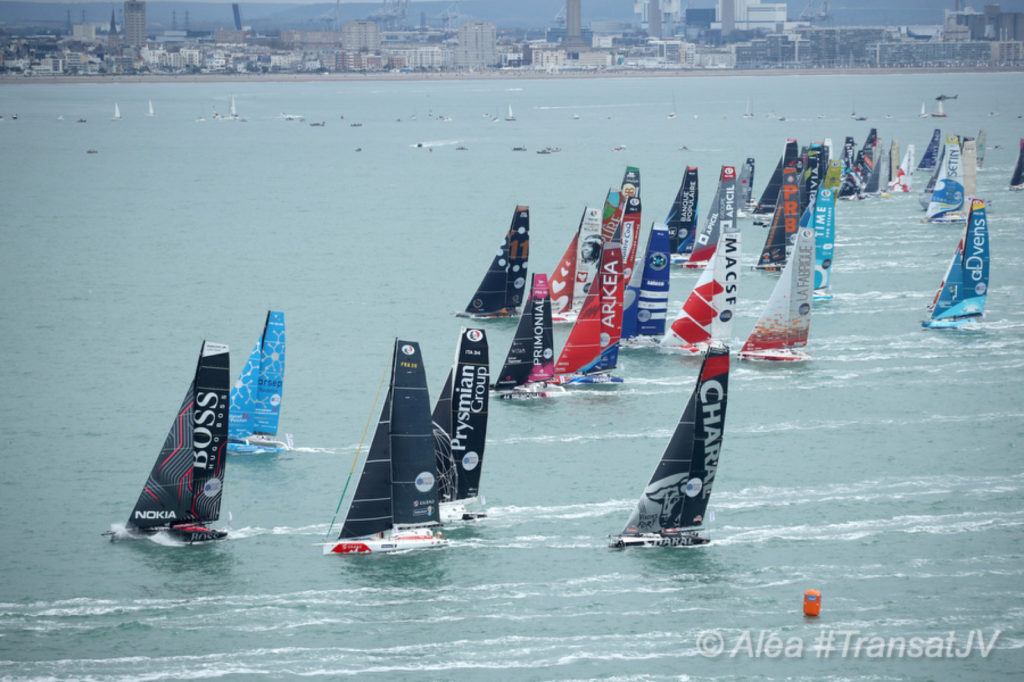