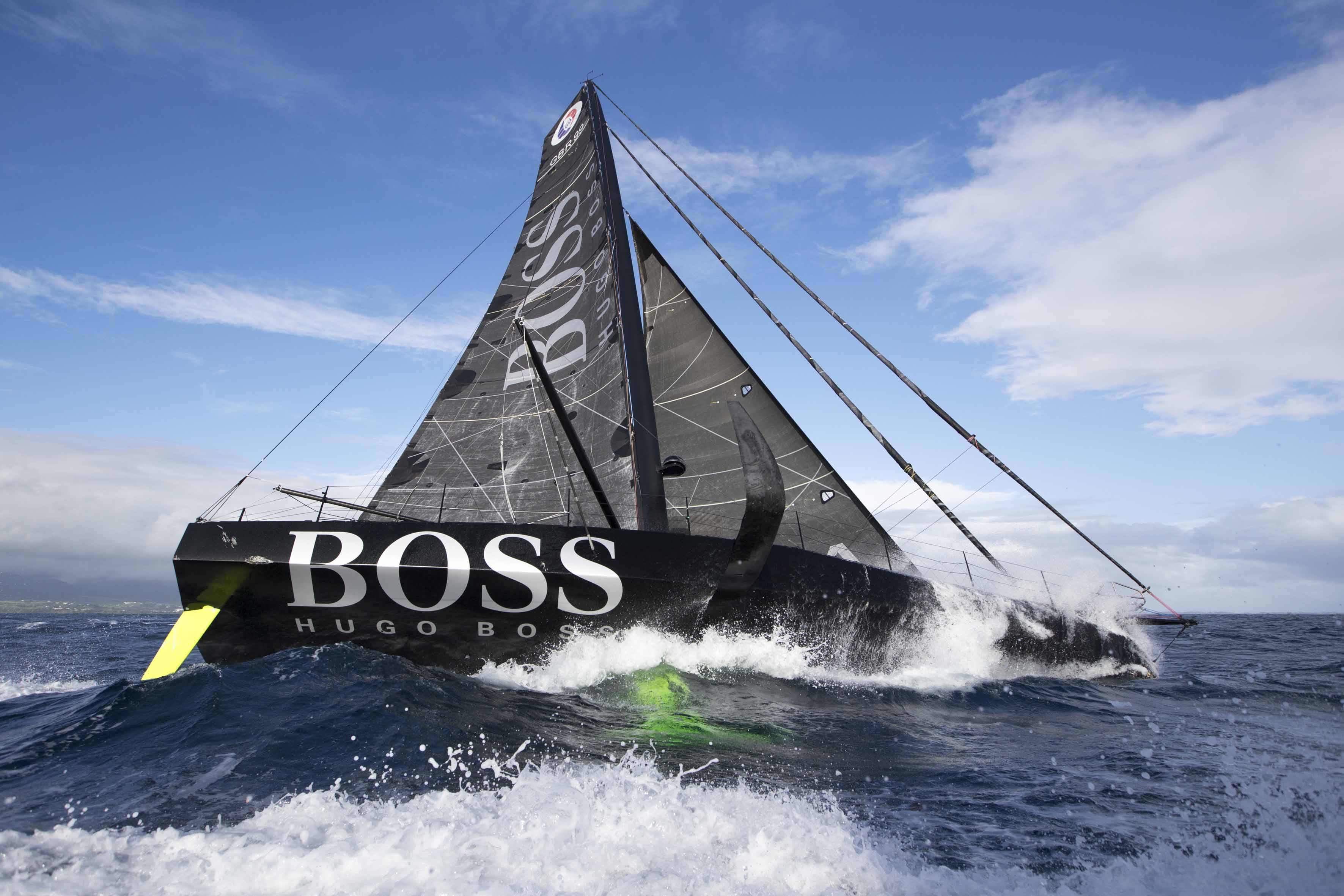 The IMOCA class held its annual general meeting in Paris this week. This gathering enabled the class to present its appraisal of what was a very positive 2018 season coming to a climax with an outstanding edition of the Route du Rhum, destination Guadeloupe.

The IMOCA has now included both of the emblematic round the world races in its race calendar: the 2020 Vendée Globe and the 2021-2022 Ocean Race (formerly the Volvo Ocean Race).

2019 looks like being an exciting, action-packed year with six races on the programme including the Transat Jacques Vabre, which is expected to bring together between 25 and 30 IMOCAs, including at least six monohulls with foils from the latest generation.

The IMOCAs in front of the public at the start of the Route du Rhum.
pic by Benoit Stichelbaut

An Attractive, Dynamic Class, Where Everyone Pulls Together
The IMOCA class brought together some fine fleets in all of the events in the 2018 season with between ten and twenty boats competing with a record number lining up for the Route du Rhum with 20 IMOCAs on the start line, which was twice as many as in the previous edition, (nine registered in 2014).

“The class has a good image with the public and media. Positive and constructive relationships are being drawn up with partners (organisers, federations, insurers),” declared a pleased Antoine Mermod, the class President, for whom the unity of the class is one of the main concerns. “The IMOCA brings together sailors from a wide range of backgrounds and with various ambitions. But in spite of that, we have managed to adopt a calm approach together. We talk things over throughout the year and the decisions are taken at the General Meeting. We do what we can to ensure everyone can get involved and feel their voice is being heard. Being part of a strong, professional class, where everyone comes together is positive for all of us.”

Clarification of the 2019 Rules
During the General Meeting on 11th December in Paris, the rules for 2019 were presented. Antoine Mermod: “A lot of detailed work was done by the IMOCA technical committee. All of the boats must fit in with the rules of the class. The limits to the rules may not have been that clear, so we had to make them more precise. That is all the more important as in 2019 there will be at least six new boats designed by four different architects. The measurers now have a solid tool to ensure an even playing field. We have planned an extension to these rules for crewed sailing, as we look ahead to the round the world race scheduled for 2021-2022.”

“The Ocean Race,” the New Crewed Round the World Race Aboard IMOCAs
It’s now clear to all. The two most emblematic round the world races are now in the IMOCA class programme. There will of course be the Vendée Globe sailed solo, which is due to start on 8th November 2020. In addition to that, we now have “The Ocean Race,” a crewed round the world race with stopovers, which will also be raced aboard IMOCAs.

The Ocean Race will start from Alicante in October 2021. The selection of the other stopover hosts is currently being carried out by the organisers. “We hope to see between ten and fifteen IMOCAs taking part,” explained Antoine Mermod.

“The fleet will include boats that have historically competed in the Volvo Ocean Race and boats that have taken part in the Vendée Globe. We are looking forward to a highly international line-up. The French and English speaking worlds of ocean racing, which for many years went their own way are now converging. We are advancing together intelligently and learning a lot from each other with the shared desire to build a solid project for the future.”

The time gap between the finish of the Vendée Globe and the start of The Ocean Race is relatively short and therefore the crewed version of the IMOCA will be very similar to the solo version. The rules make it possible to transform the boat easily with only marginal changes to the rules. 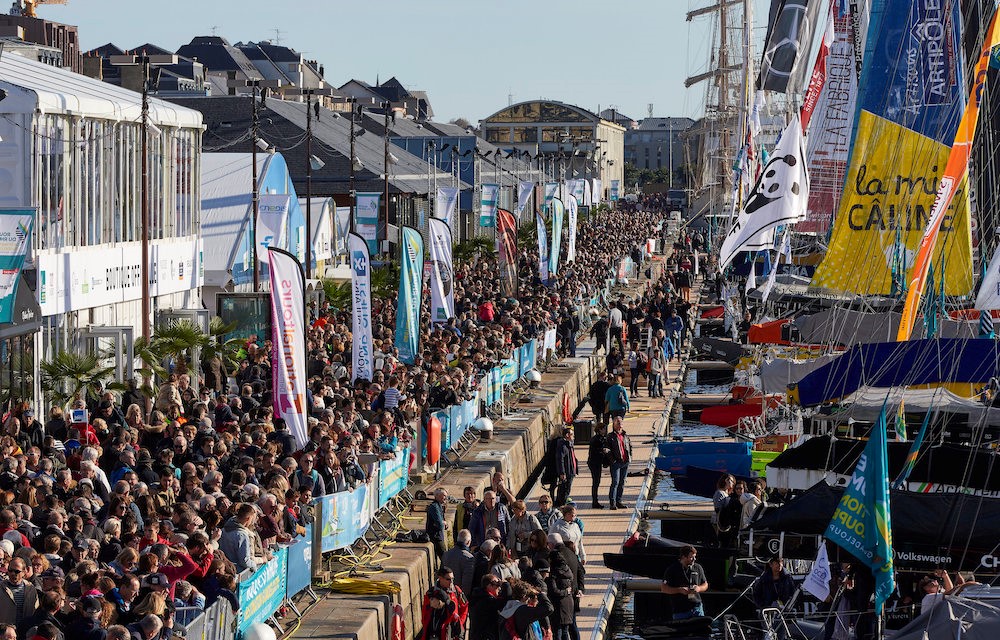 A magnificent start to the Route du Rhum off Saint-Malo.
pic by Benoit Stichelbaut

Six Races in 2019, Including Three Which Will Count Towards the IMOCA Globe Series
In 2019, the race calendar is tightly packed for the IMOCA skippers. Three events should feature in the schedule for the Globe Series, the new class world championship: the Valencia Globe Series in July (the final approval for this solo and double-handed event should be made on 18th December), the Rolex Fastnet Race in August and the Transat Jacques Vabre in late October. The latter event raced double-handed is expected to bring together an exceptional line-up of between 25 and 30 IMOCAs, or in other words practically all of the competitors that will take part in the 2020 Vendée Globe. There will be at least six boats from the latest generation skippered by Jérémie Beyou (Charal), Sébastien Simon (Arkea-Paprec), Alex Thomson (Hugo Boss), Charlie Dalin (Apivia), Kojiro Shiraishi (DMG Mori) and Armel Tripon. The 2019 calendar will also include some other races that the IMOCA class feels cannot be missed: the Guyader Grand Prix, the Uship ArMen Race and the Azimut Challenge.

Sustainable Development, A Major Concern
Until the 2020 Vendée Globe, the IMOCA class will be supporting “Ocean As Common,” an appeal for the Ocean to be considered as a common good (www.OceanAsCommon.org), an initiative launched by Catherine Chabaud and which echoes one of the main concerns of the sailors. Measures will be put in place to continue to develop this partnership in favour of sustainable development and more specifically the protection of the oceans.