The Elcano Challenge. A Voyage of Remembrance

To commemorate the 500th anniversary of the first round the world voyage, Jimmy Cornell is preparing to sail the historic route of the first circumnavigation achieved by Ferdinand Magellan and Juan Sebastian Elcano.

In fact, the Basque sailor should be credited with the first round the world voyage, as he sailed with Magellan from the start of the expedition in 1519, took over the leadership of the expedition when Magellan was killed in the Philippines, and completed the voyage in 1522. In recognition of that fact, this project is called the Elcano Challenge.

A further aim of this symbolic voyage is to be the first circumnavigation completed by a fully electric boat, something that would be very much in tune with the current concern for the environment. The boat, an Outremer 4X catamaran, will be called ‘Elcano’, but with a play on words. EL.CA.NO! ELectricity. CArbon. NO! 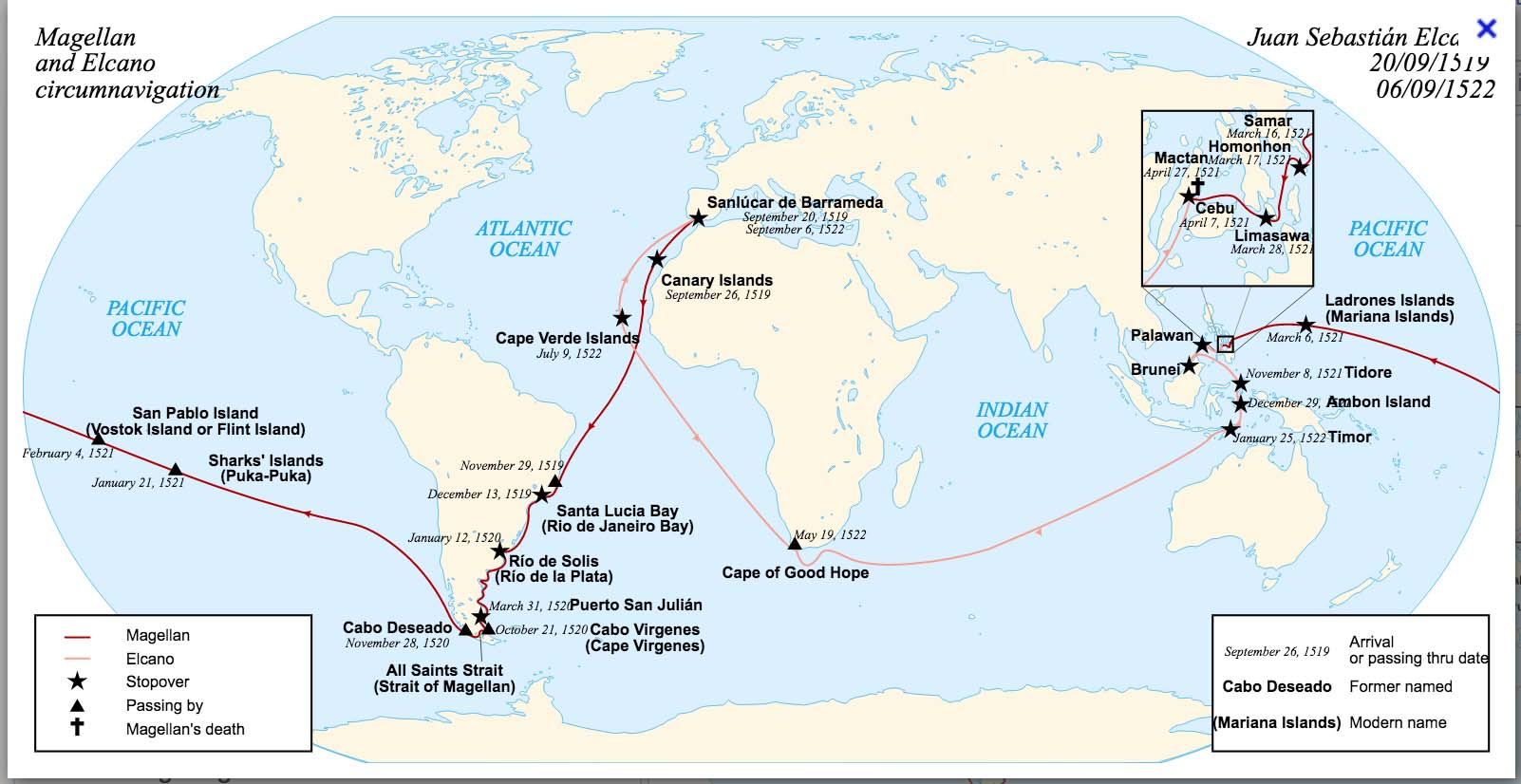 The voyage will follow faithfully the historic route by stopping only at the places visited by the original expedition. After a start in Seville in October 2020, and after a stop in Tenerife, the route will continue to Rio de Janeiro, Montevideo and Puerto Julian before transiting the Magellan Strait. After a symbolic stop at Punta Arenas, the voyage will set off on the long passage to the island of Puka Puka, in the Cook Islands. A stop will then be made at Guam, in the Marianna Islands, before arriving at the mid-point of the voyage at Cebu, in the Philippine Islands. A symbolic visit to Mactan, where Magellan was killed in 1521, will conclude the first part of this commemorative voyage.

The second part of the voyage will start from the point where Juan Sebastian Elcano took over the command of the expedition. After calling at Palawan, Brunei, Tidore, Ambon and Timor, the modern Elcano will cross the South Indian Ocean to Port Elizabeth, in South Africa. Having passed the Cape of Good Hope, the voyage will turn north, cross the equator to Ribeira Grande in the Cape Verde Islands, then head for Sanlúcar de Barrameda and finally Seville. The 30,000 miles voyage is expected to last 8 to 9 months, with a departure in October 2020 and an ETA in July 2021. 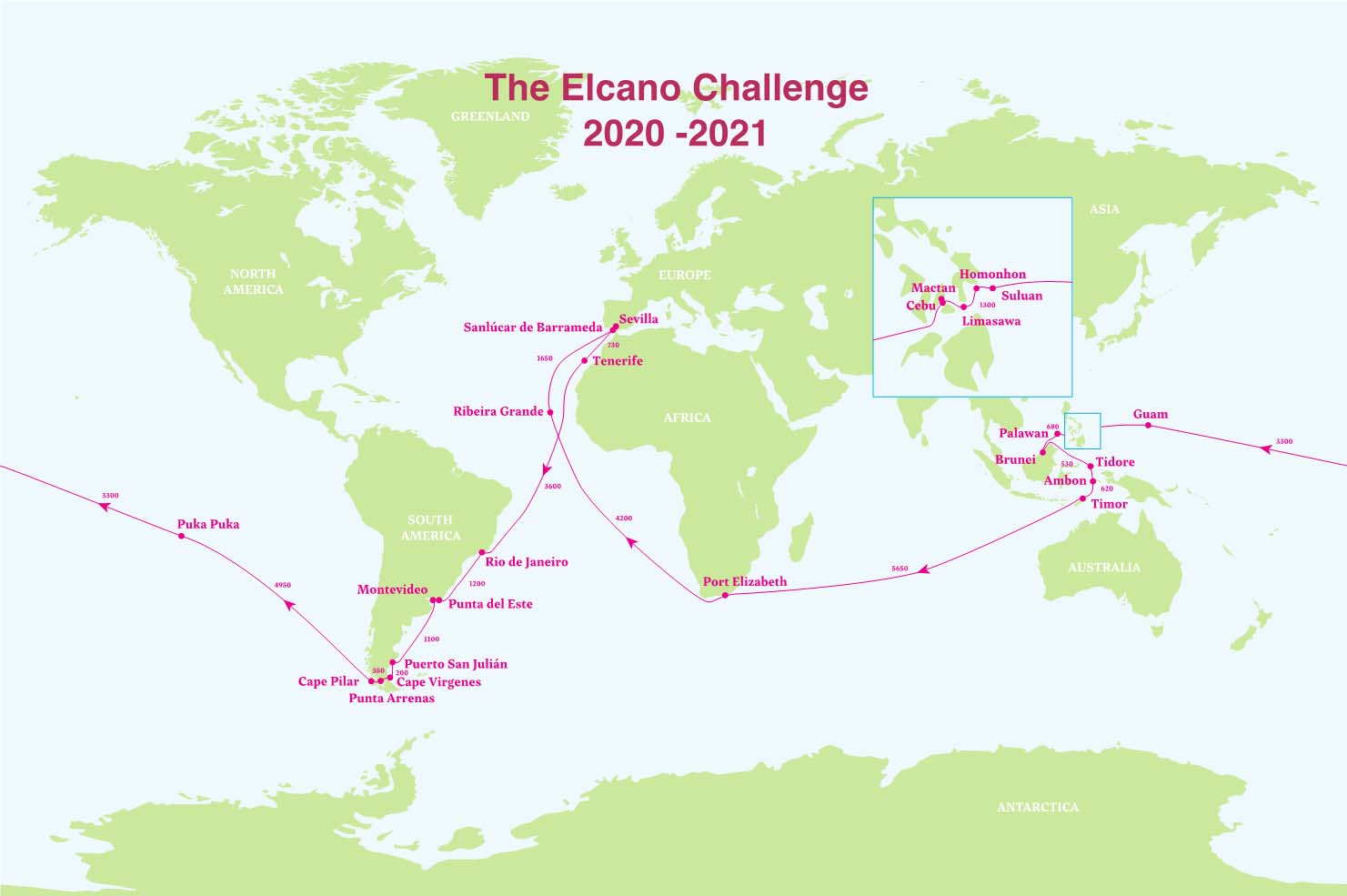 Jimmy Cornell
An accomplished sailor, author and sailing events organiser, Jimmy Cornell has sailed over 200,000 miles in all oceans of the world including three circumnavigations as well as voyages to Antarctica and the Northwest Passage.

He is the author of 16 books, some of which have been translated into several languages: French, German, Italian, Spanish, Hungarian and Japanese. Thousands of sailors have fulfilled their dream of blue water cruising with the help of his books, among them the international best-seller World Cruising Routes. Now in its 8th edition, and with over 250,000 copies sold to date, this is currently the best-selling nautical publication in the world.

As the founder of the highly successful ARC transatlantic rally in 1986, in the last 33 years, Cornell has organized 36 transatlantic rallies, two transpacific rallies, five round the world rallies and one round the world race, with over 3,000 boats and 15,000 sailors having participated in his sailing events. Besides the ARC, which continues to be the largest transocean event in the world, equally successful were the America 500 Columbus anniversary rally in 1992, the Hong Kong Challenge round the world race in 1996, the Expo 98 event commemorating the historic voyage of Vasco da Gama in 1498, the Millennium Odyssey in 1998-2000 and the Blue Planet Odyssey in 2014-2017.