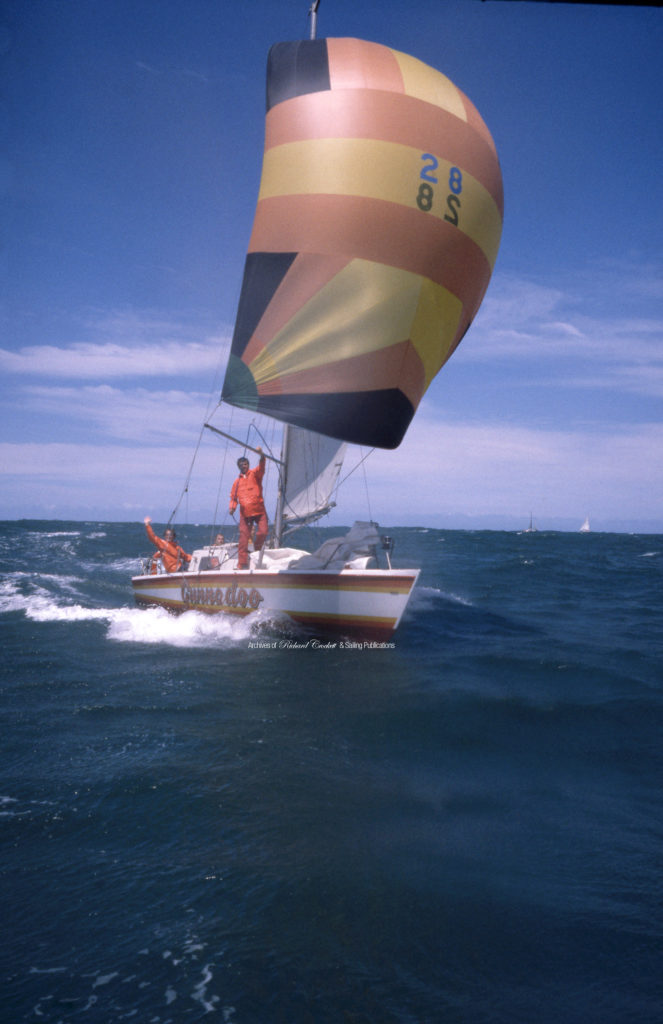 The RCOD ‘Gunnadoo” skippered by Andrew Lawrence in full flight.

The 50th Vasco da Gama Race starts on Sunday with an eight-boat fleet as two boats have withdrawn. It’s not a big fleet, but ocean races along the Wild Coast no longer attract big numbers. With three Fast 42s competing, this is likely to be where the line honours contender comes from, with the handicap race being pretty much an unknown.

The race starts on Sunday (16 May) at 11h00 and will be tracked all the way by YBtracking.

The Vasco da Gama race is steeped in history, with just so much to write about. But on browsing my archives I found a lot of interesting material from 1981, and will concentrate on that race.

In his “Comments” column in Yachtsman RSA magazine (May 1981 issue) Dave Cox wrote about the course options, leaving readers with the comment that by the time they read his next column they would know the answer as to the best course!

He also mentioned that this year was the beginning of the Indian Ocean Racing Circuit, and the Vasco da Gama Race being the first qualifying race for that award. Sadly there was little traction and interest in the circuit, and it quickly faded into obscurity with little fanfare.

In June he gave the answer in his “Comments” column by saying “I can tell you without fear of contradiction that the way to go in this years’ Vasco da Gama Race was offshore for a ride In the Mozambique Current! (see last months comments). What’s occupying my mind at the moment is which way to go next year!”

The June 1981 issue also carried a report on the race, which was part of the South African Festival Games and for which special medallions were struck. I was aboard ‘Magic Carpet’ for the Vasco Race and have one of those medals!

It was a rewarding two weeks racing as I was on the winning boat for three of the four events.

Andrew Lawrence with the Bentley Nuttall Trophy. In those days this trophy was exclusively for RCODs. Today it is awarded to the navigator of the winning yacht on handicap after John Bentley agreed to this change.

In the Vasco race ‘Gunnadoo’, an RCOD, won the non-IOR division. Her skipper, Andrew Lawrence, wrote an editorial on their race for the July 1981 issue of Yachtsman RSA magazine. The significance of this was that they went 50nm offshore to get the full effect of the current. While he did not mention how much current they had, it must have been in the 3-5 knot region.

Finally, that July 1981 issue also had a report entitled “Tackling the Indian Ocean Racing Circuit in a Sweet Pea”. Today that would be frowned up, and probably even outlawed as it’s such a small boat, but Keith Roger-Lund and his crew aboard ‘Pie’ did the race from East London to PE; Hunts Kadett Week and the race back to East London – and safely too.