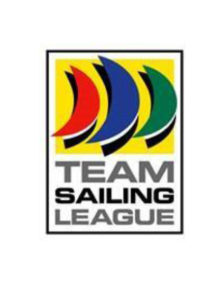 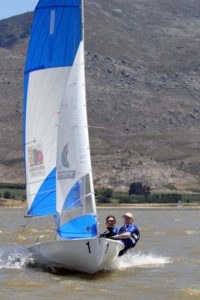 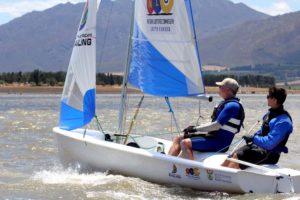 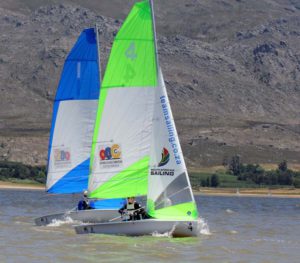 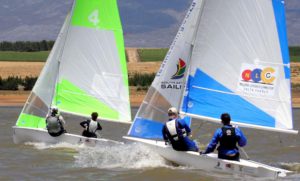 South African Sailing (SAS) launches its Team Sailing League (TSL) this weekend at the Milnerton Aquatic Club. There’s much hype and fanfare! Why?

Simply because, as World Sailing says: “Team Racing typically consists of two teams each of three boats competing against each other. It is a fast paced racing style which depends on excellent boat handling skills and rapid tactical decision making.”

Team racing is not new to this country though as it was first used in the inter-varsity regattas in the mid-to late ‘70s when the sailing component of that event was more important than the party component. In fact the sailing was very keen and hotly contested.

In team racing, again according to World Sailing, the teams will race to try and achieve a winning combination of places – the lowest score wins. The scoring system is 1 for first place, 2 for second and so on. If one boat in the team wins the race they are not guaranteed glory as their combined score must be ten or less to win – 2,3,5 = 10 points v 1,4,6 = 11 points.

If a team is lying in 1,4,6 then the boat in first place will go back and try to help his team mates through to 2,3,5 or better. How does he do this?

A team racer has two main weapons. Firstly, he can position his boat between the wind and his opponent, thus blanketing his sails and slowing him down. Secondly he can use the right of way rules to his advantage, approaching his opponent in such as way that his adversary has to change course or incur a penalty. Both these weapons are deployed before the start when the manoeuvres begin, with all six boats performing an intricate and aggressive dance to try and gain the advantage.

The racing is followed by umpires on the water who issue on the spot penalties. If a boat is protested against by another boat they can accept it and perform a 360 degree penalty turn straight away or wait for the umpires to give a decision which may result in a green flag (no penalty) or a 720 degree turn.

And something few people are aware of is that in team racing the course is usually on a ‘starboard S’ rounding course with 2 beats, 2 reaches and a run. There are 4 marks to go around, including the unusual starboard-hand windward mark rounding which provides for plenty of action and loads of opportunities to turn the race around.

So in a nutshell, team racing is pacey, racey, and tactically challenging. All ingredients for good racing and HUGE spectator appeal.

Plus it can, and most certainly will, pit the best in the country against each other, and could also develop into an inter-club challenge, a strength vs strength challenge, an age group challenge – and whatever combinations those with the foresight to embrace this form of sailing can configure.

This weekend sailors from across the country will converge on Cape Town as provincial teams battle it out alongside a team of SA’s top international sailors with a few novices even thrown into the mix in what promises to be a day of fun and great entertainment.

Saturday’s launch will give an initial taste of what’s to come once the league kicks into full swing, so anyone keen to find out what it’s all about should join in the fun as different groups will go head to head in a demonstration of what can be expected. There’ll also be a chance for the public to rub shoulders with the country’s top sailors as they show how it’s done.

A ‘family day’ atmosphere will prevail as SAS really wants a large broad-spectrum of people to witness this form of sailing, and even experience it first-hand. So on offer will be a jumping castle for the kids, some great food options and of course, a spectacular close-up view of the sailing action.

The fun will continue into the evening as the crowds will be entertained by the local Jake Gunn band.

The Boats
SAS has commissioned 28 brand new Team Sailing League boats, and all 28 will be on the water this weekend. Thereafter boats will be sent to selected areas where interested Clubs will establish their own Team Sailing Leagues – all in an effort to grow sailing in this country.

“The ultimate aim with the TSL is to see a major contribution to the growth of sailing in this country through the introduction of regular new sailors to our sport, and to reignite the sailing fire in those sailors who have not been on the water for a while,” said SA Sailing Chairman Peter Hall.

“Similar to all other programmes the success of this requires the support of all clubs, classes and sailors around the country. There is a lot we will learn in the journey, but this certainly offers an exciting year ahead,” he added.