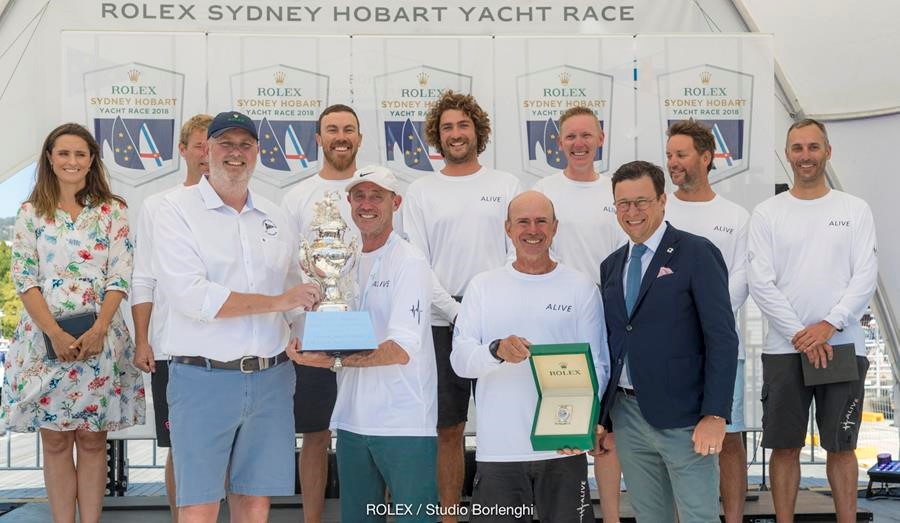 The crew of Alive with owner Philip Turner and skipper Duncan Hine receiving the Tattersall Cup and Rolex timepiece.
Pic by ROLEX/Studio Borlenghi

For Phillip Turner the dream of winning the Rolex Sydney Hobart Yacht Race began “five or six years ago” when he was watching the finish and suddenly thought: “I’d like to win that one day.”

That dream became real for Turner, a retired professional gambler, when his yacht ‘Alive’ was formally declared the overall winner of this year’s race and he received the Tattersall Cup from the Cruising Yacht Club of Australia’s Commodore, Paul Billingham.

However, as he prepared to accept one of the world’s most prestigious offshore racing awards, Turner was still coming to terms with his success, saying: “It still hasn’t sunk in.” He also admits to being “introverted,” and that he doesn’t “like all the attention” that comes with winning.

Turner still allowed his memory to wind back to his days as a child. He was raised in Hobart and every year with his father would go to Constitution Dock to watch the fleet finish the race one by one.

They were the days when he fell in love with the Sydney Hobart. The iconic event became a part of Turner’s DNA. Every year he would watch in awe as the yachts finished in all states – and their crews – and then listen to or read of tales of triumph, woe and adventure.

Each year was a building block to a life pursuit that is now complete: “It has always been a highlight for me,” said Turner before being presented with the Cup.

‘Alive’s’ overall win in the Rolex Sydney Hobart is only the fourth by a Tasmanian boat. The last was Bob Cumming’s Screw Loose in 1979. The previous two were G.D. Gibson’s Westward in 1947 and 1948. 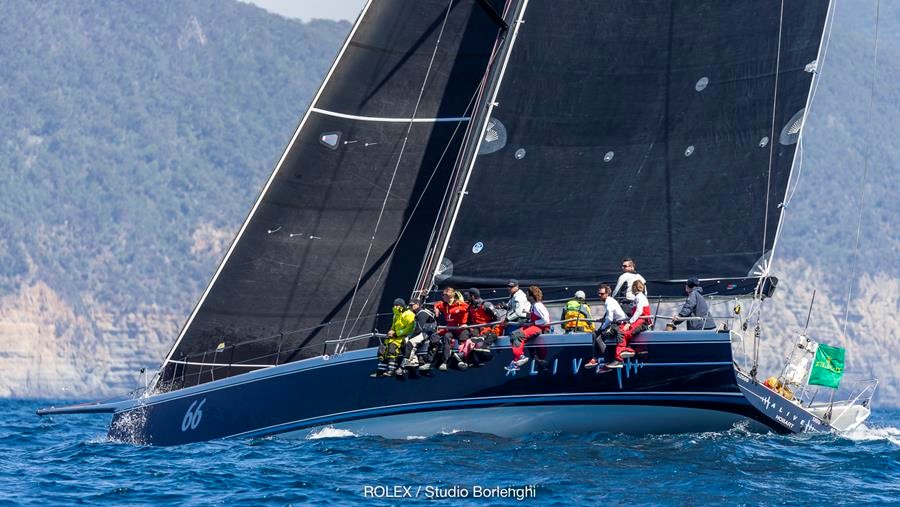 Alive making their way to Hobart.
pic by ROLEX/Studio Borlenghi

“Naturally you can’t do it without a good crew.

“It’s a marvellous race to win – it’s the pinnacle of yachting – like winning the Melbourne Cup. It’s something you never forget.

The significance of adding to Tasmanian sailing history was not lost on Turner, nor on his skipper and project manager to their Sydney Hobart campaign, Duncan Hine – his lifelong mate.

“It’s great for Tasmania,” said Turner who bought ‘Alive’, formerly named ‘Black Jack’, in 2014, with the “intention” of winning the race.

“I looked at what was available,” he said of his pursuit to find the best boat for his campaign. “I got (Australian boat designer) Fred Barrett to help me and basically we kept coming back to this boat.”

The buy has paid dividends. The canting keeler notched up numerous successes before finally winning the Sydney Hobart in which she finished eighth on line honours and placed 17th overall in 2016.

Renamed ‘Alive’ by Turned after buying it, she filled his trophy cabinet with wins in a number of east coast races in Australia before heading to the south-east Asia circuit in 2017. On returning home she was second over the line, third overall and won ORCi in the 2017 Brisbane Gladstone Race, then third on line in the Brisbane to Keppel race.

‘Alive’ which was also fifth over the line in this year’s race. 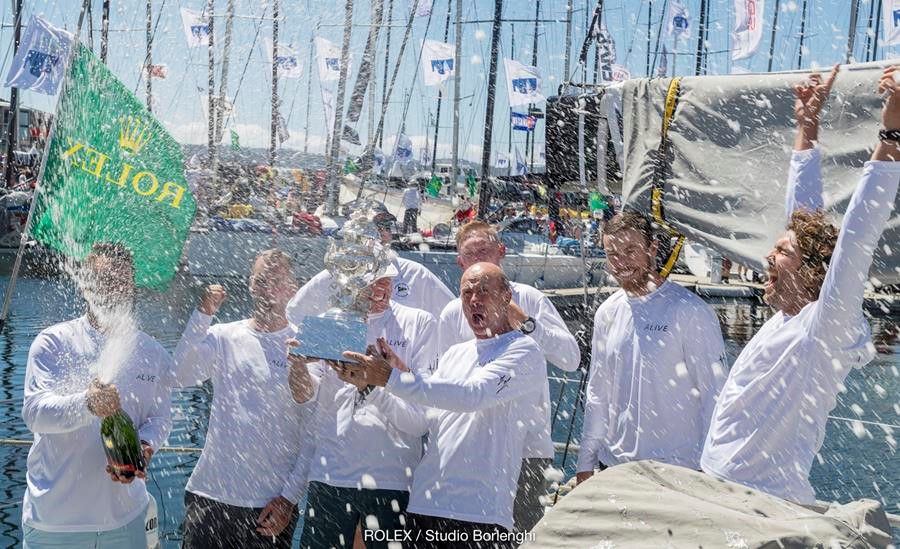 Second on corrected time was the NSW entry ‘Wild Oats X’ owned by the Oatley Family and skippered by Stacey Jackson who had an all-female professional crew.

They were followed by the Hugh Ellis owned and Adrienne Cahalan navigated ‘Voodoo’.

Asked for the critical moment of this year’s race, Turner said “it was passing Tasman Island.”

“And when we went past ‘Wild Oats X’ and started to make ground,” he said. “We were fairly happy (where they were) on handicap then.

“We had to beat ‘Wild Oats’ – then worry about the other boats later.”

The challenge from ‘Wild Oats X’ played an instrumental role in Turner getting the best from ‘Alive’ and his young but talented crew, as ‘Alive’s’ navigator, Wouter Verbraak, recognised on Sunday as he sat next to Turner. “We had our sister boat with us all the way,” he said.

“There is nothing like a competitor to push you, to get the best out of you and your teammates. And that is what happened.”

Verbraak, a professional sailor, lauded Turner and ‘Alive’ skipper Duncan Hine for their commitment to the Sydney Hobart campaign.

“We made another step with our team,” Verbraak said. “It started with Phil’s dream to win the race. And with Duncan putting the project together, it became a really good execution with a good young team.”

Turner said it was hard to select his final crew of 12, down from the “16 or 17” he had to choose from. But in the downwind conditions, weight was a crucial factor in optimising Alive’s boat speed.

“It’s another chess game,” Turner said of the selection process.

“Some people probably could’ve been in, but missed out on being on the winning boat. You try to minimise the weight, which is difficult.”

However, as Verbraak added, this year’s 74th edition of the Sydney Hobart was “not typical. The light wind transition in Bass Strait was really a massive challenge, like threading the needle.

“It was such a narrow window and you had to be very, very accurate. “The models were not really correct, so we had to feel our way.”

As for the moment when Alive crossed the line on Friday?

Hine laughs as he recalls it. “It’s actually like an anticlimax. You’ve had this goal and focus for the entire race and all of a sudden you cross the line and it’s ‘what happens next?’ Then we’re thinking about what we’ve been yacking about – ‘beers, beers, beers’.

“I could feel the vibe of all the guys, ‘let’s just get in’. But then we had to do a sail past the Taste of Tasmania after we finished – and the emotion changed.

“It was ‘Wow, this is really good.’ It was a fantastic reception.”

Turner’s plan for ‘Alive’ is to race her in the United States in a campaign culminating with the TransPac race (from California to Hawaii) in March. She will be shipped over on January 17. So the time for any respite is limited.

Following a protest against Wild Oats XI by the Race Committee of the Rolex Sydney Hobart Yacht Race, which was held by the International Jury at Royal Yacht Club of Tasmania , it was found that the protest was invalid and so Wild Oats XI retains her line honours crown.

Conclusions:
1. The Race Committee’s investigation and subsequent protest arose from the report from the owner of Black Jack, a competitor in the Race and therefore a person with a conflict of interest within the meaning of the Racing Rules of Sailing (RRS).

2. The Race Committee’s investigation was prudent, however in these circumstances, for the protest to be valid under the Racing Rules of Sailing, a competitor with information about a potential rule breach must lodge the protest.
Rules that apply: RRS60.2 (a), Definitions – Conflict of Interest.