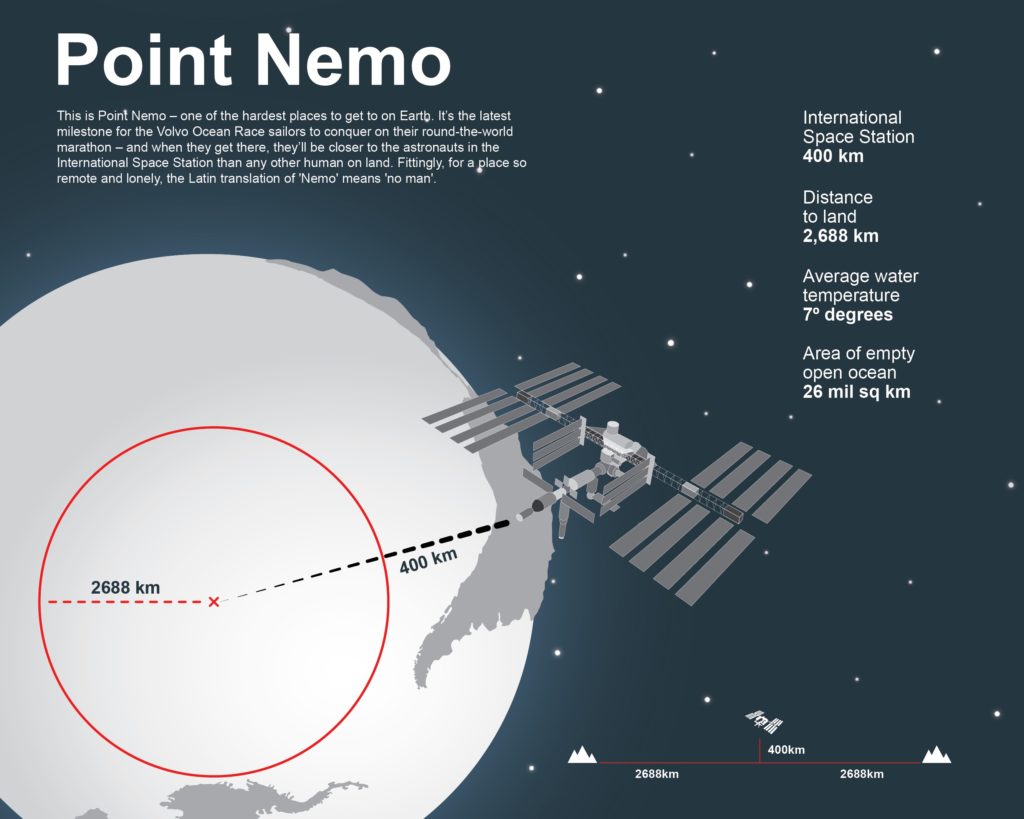 On Sunday morning Brunel led the Volvo Ocean Race fleet past Point Nemo, the most remote spot on the world’s oceans.

Point Nemo is nearly 1,400 nautical miles from the nearest land, meaning the closest people to the sailors, apart from their fellow competitors, are the astronauts on the International Space Station, some 220 nautical miles overhead.

Here Are 8 Facts About Point Nemo

The Volvo Ocean Race boats have raced past an iconic point – Point Nemo, the world’s most lonely place, and here’s everything you need to know about the place which is regarded the hardest-to-reach location on planet Earth.

• You can’t actually see it. That’s because ‘Point’ Nemo isn’t actually a bit of land. It’s an invisible spot in the vast Southern Ocean furthest from land, in any direction. Other poles of inaccessibility include the Eurasian Pole, in China, or the Southern Pole of Inaccessibility in Antarctica – a very difficult place to visit.

• It’s pretty far from anywhere else. 2,688km away in every direction, to be precise. Either in the Pitcairn Islands, Moto Nui in the Easter Islands, and Maher Island in Antarctica. If you’ve got to decide, we’re going to suggest heading for the Easter Islands – Ducie Island is a non-inhabited stretch of rock about 2km long, and Antarctica is, well, Antarctica.

• It’s only officially 25 years old. Point Nemo didn’t technically exist until 1992 – or if it did, we didn’t realise it. A Croatian-Canadian survey engineer Hrvoje Lukatela used a geo-spatial computer programme to figure it out. SPOILER ALERT: He didn’t even go there, using technology to calculate the exact location. He realised that since the earth was three-dimensional, the most remote ocean point must be equidistant from three different coast lines.

• Point Nemo is a source of excitement for scientists. In the ‘90s, a mysterious noise was picked up less than 1,250 miles east of Point Nemo. The sound, dubbed “the Bloop”, was louder than a blue whale – leading to speculation that it was made by some unknown sea monster – and had oceanographers all worked up. After much trepidation, NOAA (National Oceanic and Atmospheric Administration) worked out that it was the sound of a giant iceberg fracturing and cracking.

• It isn’t named after a fish. It’s moniker is a tribute to Captain Nemo from Jules Verne’s ‘20,000 Leagues Under The Sea’ – and the Latin translation of ‘Nemo’ actually means ‘no man’, a fitting name for a spot so lonely. When the boats passed Point Nemo they were closer to astronauts on the space station than to other humans on Planet Earth.

• There are rumours that it’s a space junk cemetery. With no-one around, it’s the perfect place to discard of old rockets and satellites. Over 100 decommission space craft are thought to lie in the area.

• Volvo Ocean Race is leading groundbreaking scientific exploration in the area. No-one goes to Point Nemo – I mean, why would you? – but in 2017-18 the Volvo Ocean Race boats will be collecting samples as part of the Science Programme, funded by Volvo Cars. The boats are dropping drifter buoys at specific locations around Point Nemo, which will collect key metrics for scientists around the globe. Two teams – Turn the Tide on Plastic and team AkzoNobel – are gathering microplastic data to contribute to an ongoing study which aims to provide an ocean health snapshot based on samples collected along the race track.

Don’t forget to wave hello to the guys in space!