Passage Making in the Company of Sandefjord 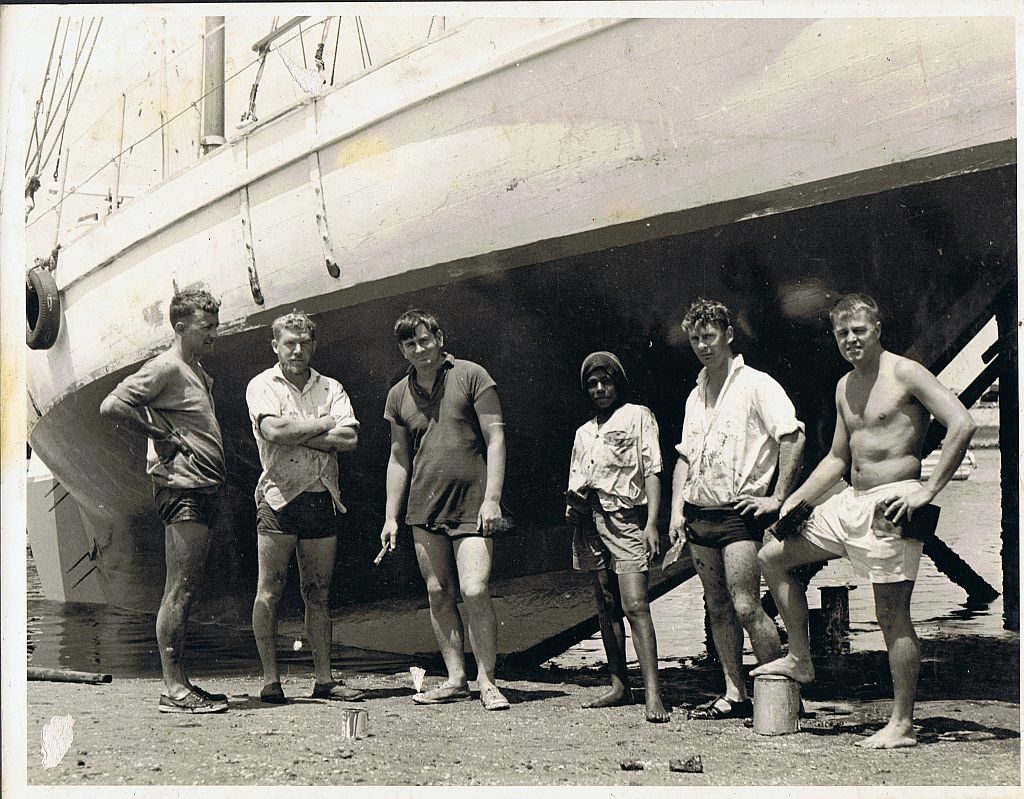 Intro. This blog recently carried an announcement on the passing of Barry Cullen, and requested anyone who had sailed the boat to submit their thoughts and pics too. Jack Hargraves was quick to respond with both words and pics. Despite not sailing aboard her, he sailed alongside her for many thousands of miles and has vivid memories of those times. It’s a great read, so take your time to enjoy it.

The recent passing of Captain Barry Cullen, who with his brother Patrick and their amazing crew sailed ‘Sandefjord’ on an historic Durban to Durban circumnavigation in 1965/66, stirred up many memories of shared adventures as we voyaged together chasing the lure of the seas.

I had arrived in Durban in December 1964 aboard the New Zealand yacht ‘Tuarangi’, a 38′ William Atkin ketch which we had built over 8 years in Invercargill, New Zealand’ s southernmost city. In those days there were not a lot of cruising yachts in Durban. There were around six at the Point Yacht Club, ‘Tuarangi’ and ‘Diddikai’ from NZ. ‘Lunkentuss’ from Sundsvaal in Sweden. A French ketch whose name I cannot remember, and South African Larry Neilson who had mostly singlehanded from NZ on his 29′ sloop ‘Heather’ and another William Atkin boat named ‘Skyline’. 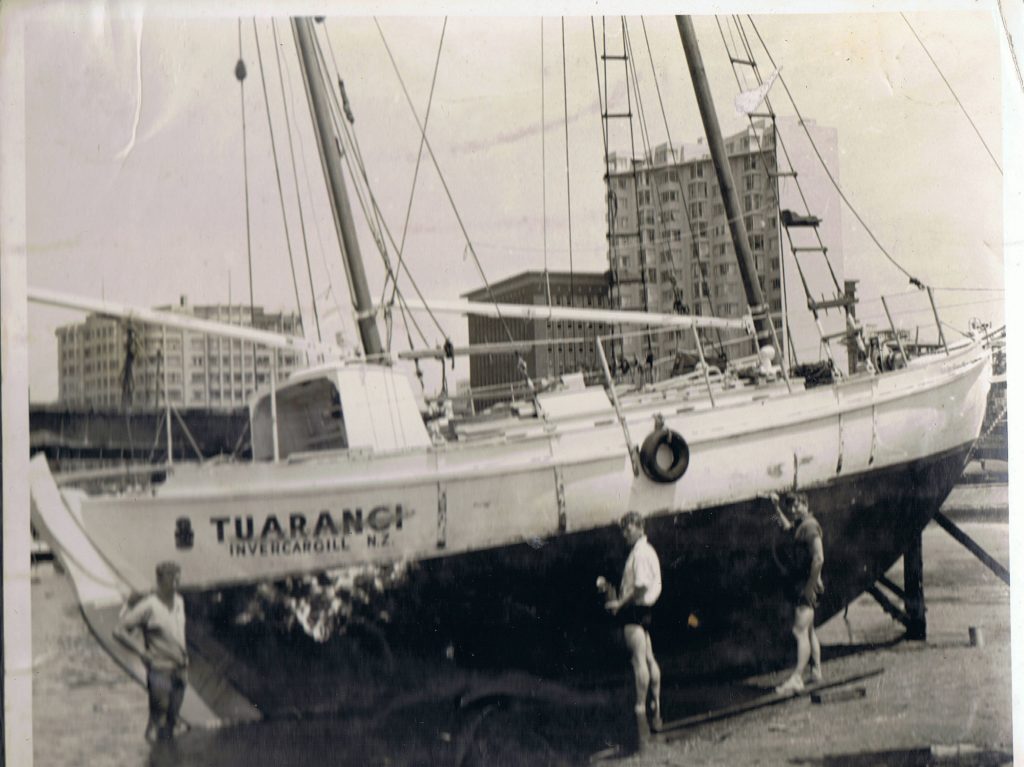 We spent a year in Durban, they were marvellous times, working sporadically to top up our totally empty coffers and replenish our used up supplies. Jack Crooks our intrepid Captain was a panel beater which was a borderline occupation in those apartheid days. He got a job with a trucking company in Zululand.

Peter Baxter who had developed pneumonia mid-Indian Ocean was an electrician, and he was immediately taken home by Doctor Hamish Campbell and nursed back to health in very comfortable surroundings. 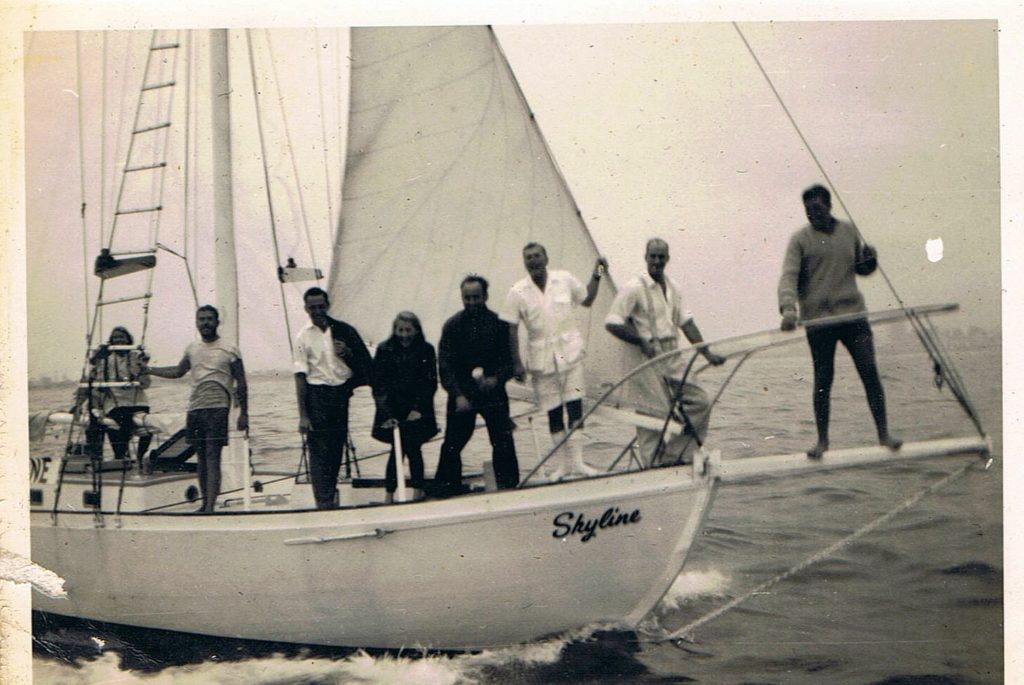 I worked as a carpenter on various buildings around Durban, before ending up selling encyclopaedias, a lucrative, but soul destroying job which got me inside many nice homes, where being a NZer was a great advantage. Some sales were made because the homeowners had fought with Kiwis in WW2 – and then there were always the All Blacks! One sale was made because I stepped over three large sleeping Alsatians supposedly guarding the doorstep! I did eventually get bitten hard on my rear end by a slavering Alsatian with a litter inside a shed I passed to close to! That really hurt!

I also crewed as navigator on two Piver trimarans which had been built in Cape Town. One we took to what was then Lourenco Marques where the King of Portugal came aboard for a look. That was the only trip I was ever seasick on. We left Durban in a roaring southerly against a 2 to 3 knot south setting current and the seas were short with near vertical faces to ram into. 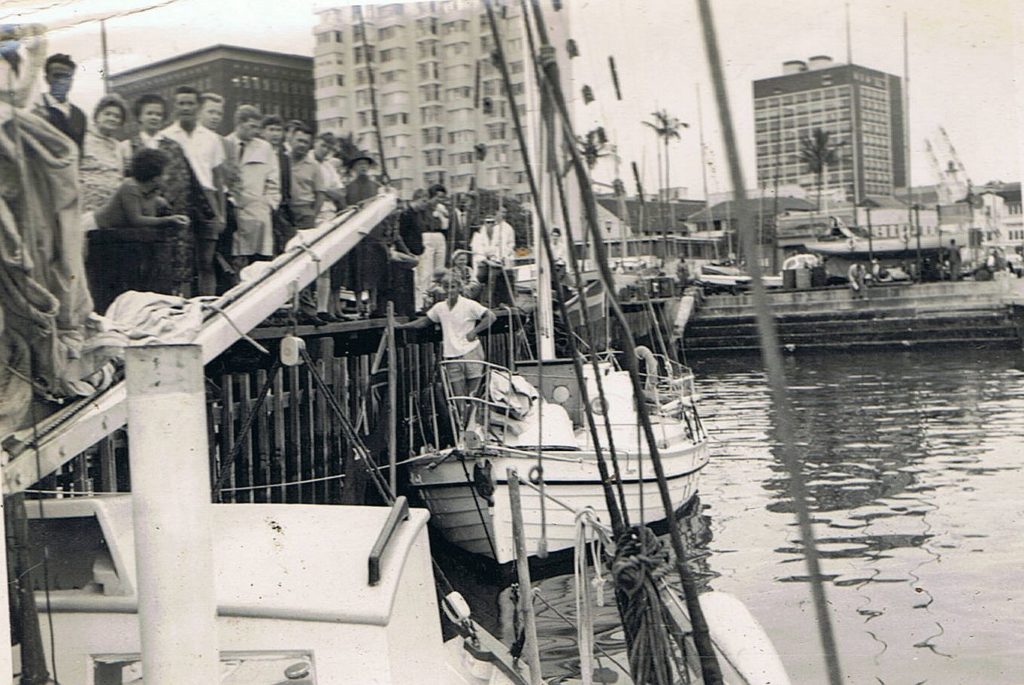 Tuarangi and Lunkentuss preparing to depart from the old International Jetty in Durban.

Another, the ‘Victress’ we took back to Cape Town from Durban where we got blown about 90 miles south of the Cape after being close to the Cape lighthouse and getting whacked by a severe northwester. We hove-to, and with one hull full of water and spilled petrol sloshing about, our Hailey acetylene light and life ring were blown out of their support brackets and streamed horizontally across the deck, The water activated light ignited and was bouncing on the access hatch above the petrol and water filled hull. The wind was about 70knots – and fairly exciting stuff! 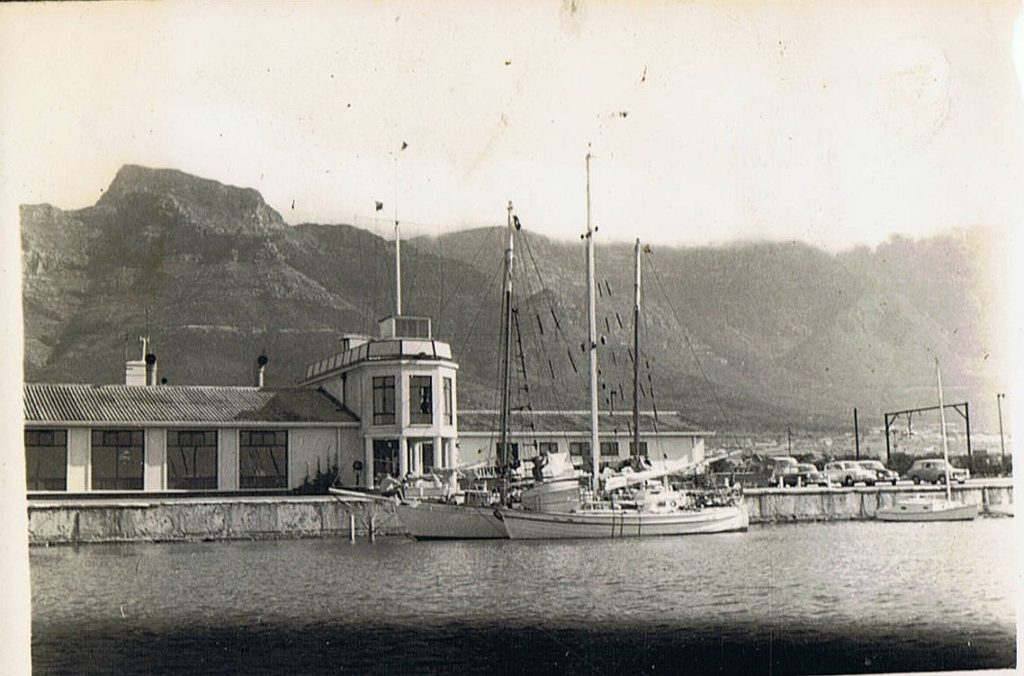 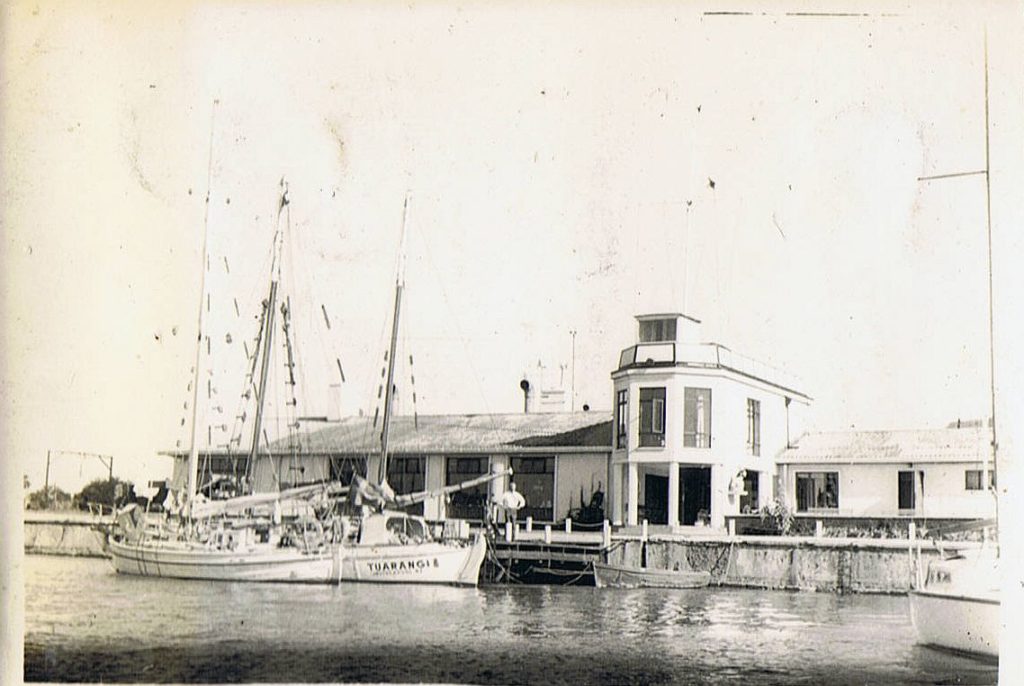 It was not long before we met up with the ‘Sandefjord’ boys who were working furiously on the boat on the Durban wharf. Many beers and nights on the town were shared with them . Barry Cullen was the more serious one who tried to keep his social crew in hand, but this did not always work as he hoped.

Later ‘Lunkentuss’ with Daag and Gunnar sailed in from Sweden.

‘Lunkentuss’ and ‘Tuarangi’ sailed together from Durban as far as Ascension Island in the South Atlantic. We often joked about ‘Tuarangi’ being the “southernmost” yacht to be sailing around the world at the time, and ‘Lunkentuss’ the northernmost!

She was a clinker 30′ double-ender and often kept in sight of us for days on end. We often gave them fish if our black cat named Hendrick Verwoerd hadn’t eaten them. 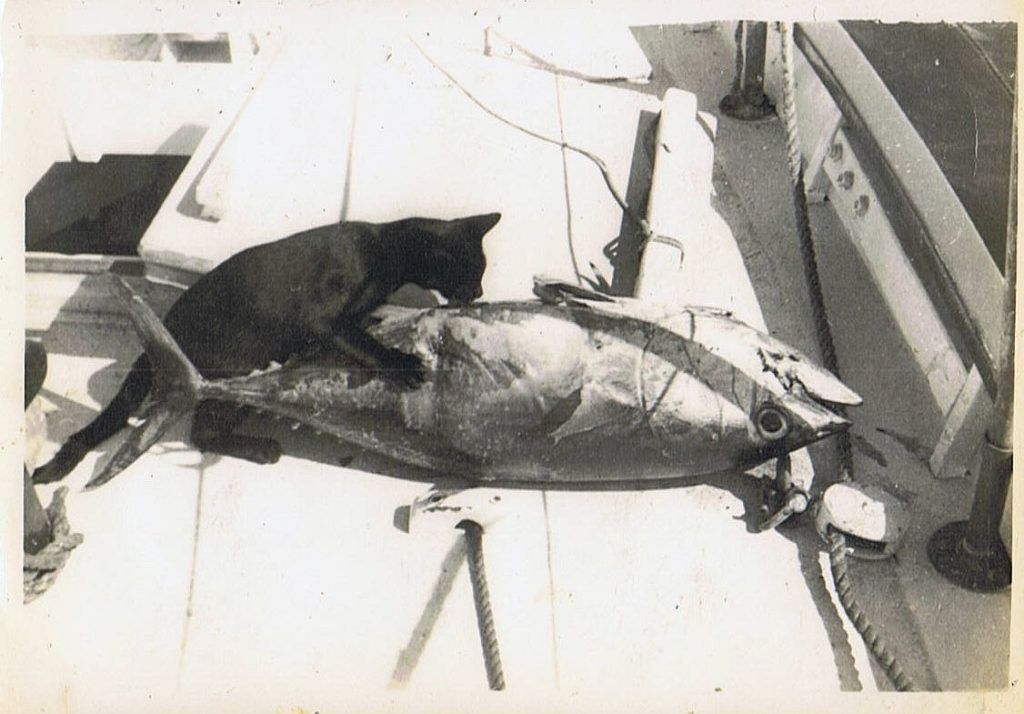 Hendrick Verwoerd wondering where to start!

‘Sandefjord’ also had a cat they named Holyoake after our NZ Prime minister! It was a bit stunted as it’s growth slowed after having an accident with a hatch. ‘Tuarangi was only the second NZ Yacht to circumnavigate at the time. The first was ‘Marco Polo’ with Tig Loe and Tony Armitt aboard. That was 10 years before us, so they paved the way for warm welcomes for us in South Africa as many remembered them fondly.

We finally got away from the pleasures of Durban and the extraordinary hospitality of the Point Yacht Club before ‘Sandefjord’ departed, and only met with them again when we finally arrived at Grenada in the Caribbean. Here I renewed my acquaintance with their lovely NZ crew Mary Clayton. I sadly left ‘Tuarangi’ in Grenada – a very difficult decision. Our mate Peter Baxter had received a Dear John letter from his NZ girlfriend and wanted to get back to NZ as quickly as possible to try and salvage the relationship. Unfortunately he was too late! 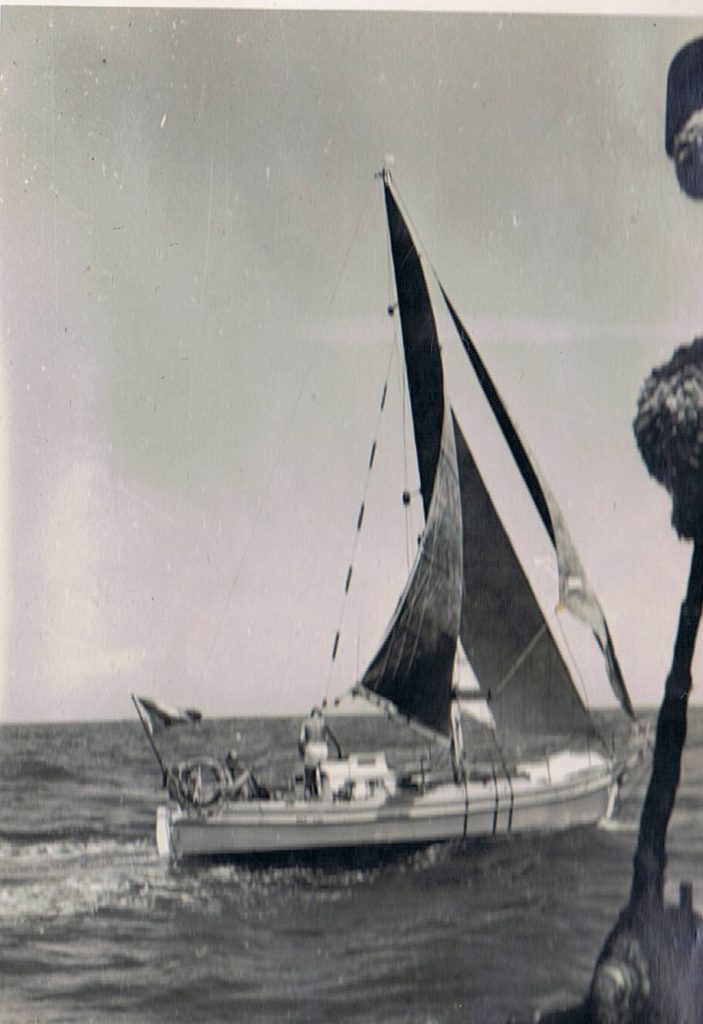 I was broke as usual and not ready to return so quickly to NZ, and got a crew job on ‘Ron of Argyle’ with Jol and Jenny Byerly, chartering on the run between Grenada and Antigua. They were not ones for engines so we sailed everywhere on the 55′ Yawl, and I learnt a lot from Jol. He was a great sailor and largely responsible for starting Antigua Race Week.

Life was not always easy for a young fit 25 year old on ‘Ron’, as not many clothes were worn when on charter, and Jenny had modelled for Playboy Magazine. Enough said!

After a few months Jol was about to buy ‘Lord Jim’ and I was going to skipper ‘Ron of Argyle’. Out of the blue a call came from Panama where ‘Sandefjord’ was moored after finally traversing the canal. A lovely 80′ Alden Schooner named ‘Dante Deo’ was looking for a new skipper and the Sandefjord team had given me the nod. Being offered US$150 a week as against 10 Pound Sterling on ‘Ron’, leaving was easy. 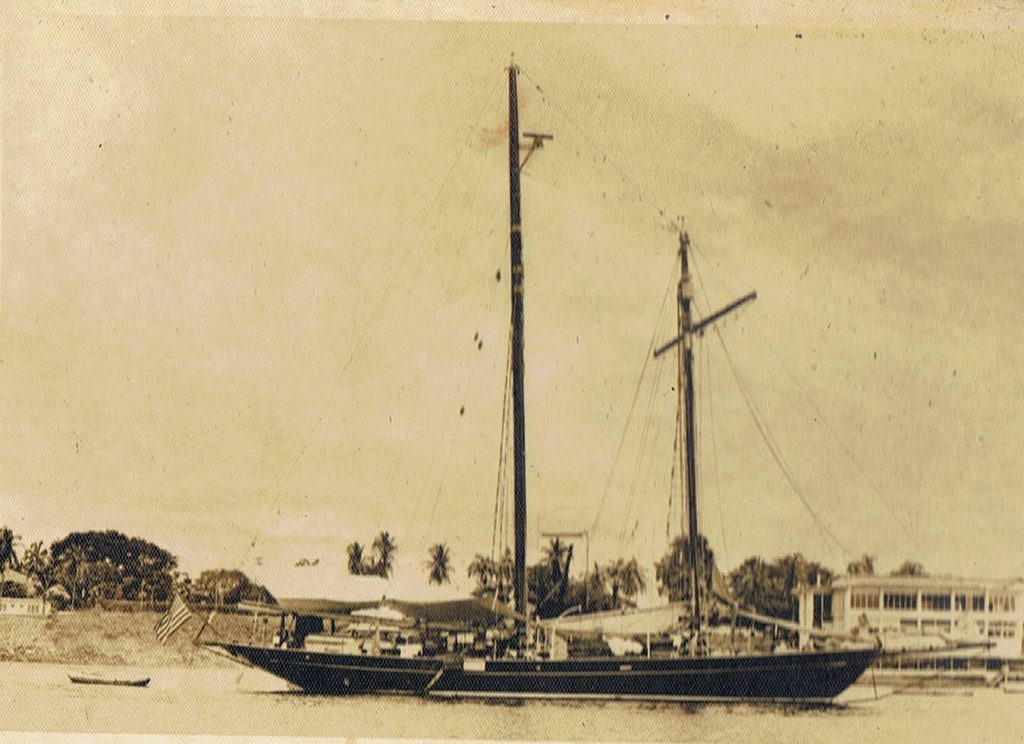 I flew to Panama and the Balboa YC and settled in on ‘Dante Deo’ with ‘Sandefjord’ moored just down stream of us. One of the first things I did was a huge spring clean as though a large vessel, ‘Dante’ was full of superfluous junk. We waited one night until the Miraflores lock upstream of us opened their gates then launched a lot of goodies over the side into the current. Not PC today, but the ‘Sandefjord’ boys managed to retrieve plenty to help them on their way home!

One night at the Yacht Club bar a gang of well dressed clean shaven men at one end the bar had us wondering who they were. Keeping to themselves it took some time before we realised they were the Sande boys who had shaved their beards off, cut their hair and dressed up! Not at all the usual scruffy paint spattered bunch of desparados! 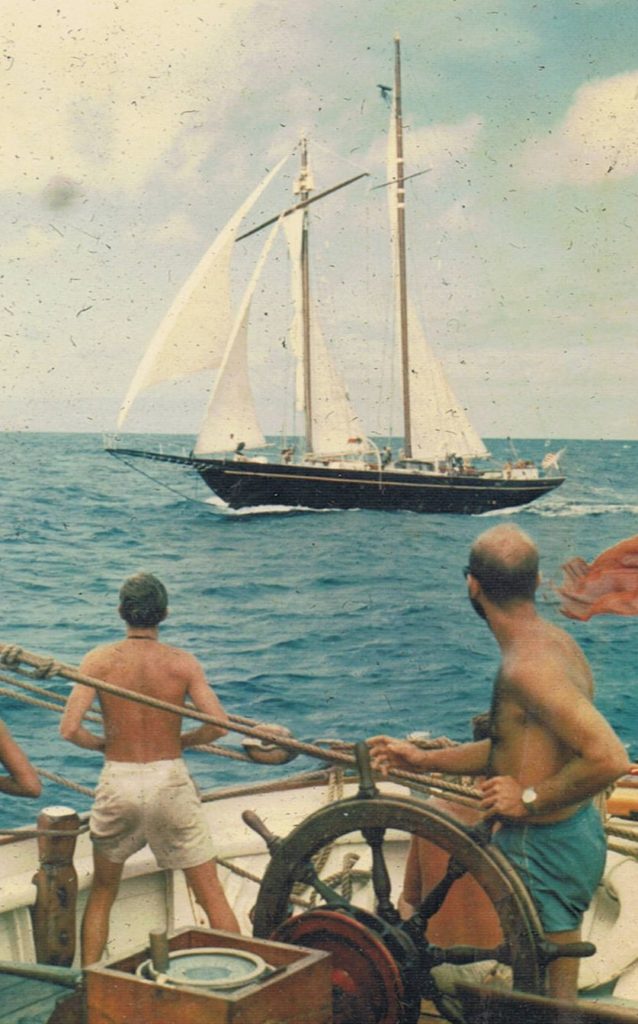 After much preparation we finally sailed away from Panama. As the owner was from a company supplying malt to breweries in Wisconsin, we had access to an endless supply of beer. As I’d been so insistent on clearing ‘Dante’ of surplus gear, and shipping off 12, 45 gallon drums back to the States, I ran into some opposition when I said we could take 100 cases of beer. Storage problems were soon solved by covering our cabin floors with two layers of beer cases and walking around with heads bent until we drank our way down!

Once again we met up with ‘Sandjeford’ in the Galapagos Islands where we spent six fantastic weeks exploring and travelling freely around as a group. Nothing like the tightly controlled visits of today. Departure day finally arrived and with Captain Gordon Keeble’s square rigged topsail schooner ‘New Endeavour’, which had turned up in Tagus Cove on its way to Australia from England, we weighed anchors and with ‘Sandefjord’ under tow we headed out to sea.

Just before casting off we were hailed by ‘Sande’s’ crew with the news that Mary wanted to join me aboard ‘Dante Deo’, so with some difficulty we shortened the towline and got her and a very small bag across the line and aboard. It was a very happy moment for me, a surprise to both our owner Tom Kurth and myself, and sad times for the unselfish ‘Sandefjord’ crew which Mary had been part of right from the start and planning of their voyage. 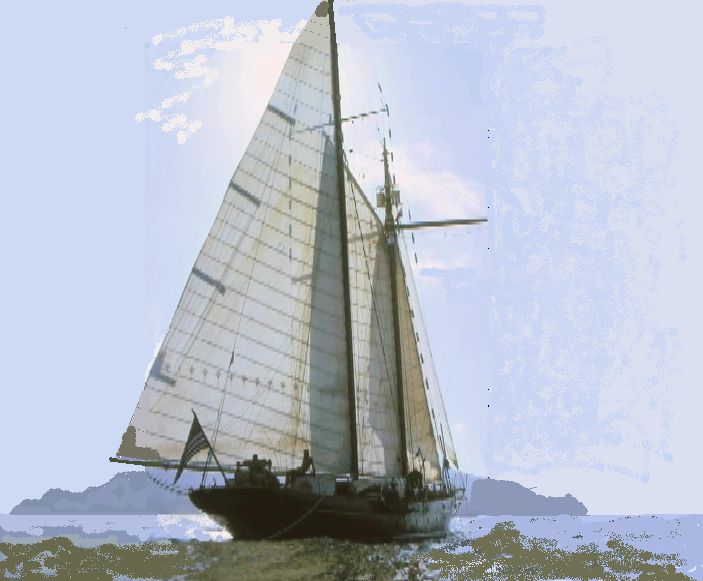 A race to the Marquesas had been agreed upon by Captain Keeble and ourselves, the prize being enough antifoul for a bottom paint in Tahiti. A very casual affair, it soon became obvious that we were the faster boat. At one stage we swapped four crew with the ‘New Endeavour’ to give them a bit of different adventure. It became difficult to retrieve them as day after day Captain Keeble would haul off to the north just before dark and be out of sight at dawn. As we slowed down overnight so he supposedly did not get too far ahead, it would take us all day to find and catch up with him again with not enough light left to effect a small boat transfer! Finally we succeeded and we cracked sail on and got to the Marquesas well ahead of him, and we stayed there for some time. ‘Sandefjord’ had made it to Tahiti by the time we got there, and Keeble had been and gone! He did leave a bottle of rum aboard ‘Sandefjord’ for me, but I never saw the paint!! 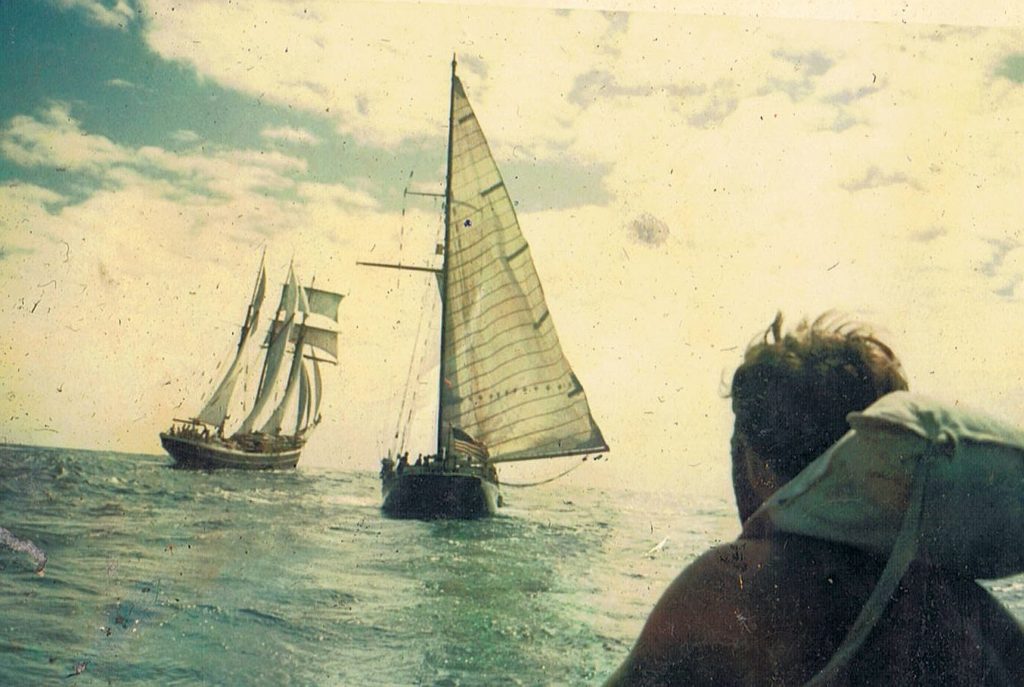 We moored stern-to the colourful Papeete waterfront. ‘Sandefjord’ was alongside and we enjoyed some very special evenings with music, rum and lots of frivolity until it was time for ‘Sandefjord’ to sail on. With her engine not working it took her 56 days to reach Sydney for another start to new adventures homewards.

What a wonderful time for all of us, what memories we shared. Those days provided us with experiences few are lucky to have today – and ALL done without GPS and Mobile phones!