Dave Shilton was invited to join a group of Finn sailors in a 2-week ‘Emerging Nations’ Programme before the 2018 Finn Gold Cup in Denmark. He received intense coaching and support both before and during the Gold Cup. The programme proved a great success for Shilton as he was 5th in the first race of the regatta against the best in the world. His final position was a credible 56th out of 90 boats.

Shilton’s dream was to come back to South Africa and to sail as much as he could. His first regatta at home was the 2018 Finn National Championships at Vaal Dam. He had another dream, which was to win the nationals, and this he did in style by winning 9 out of the 10 races in conditions that varied from a gentle 5 knots up to a wild and choppy 20 knots.

Dave is a modest, quiet gentleman who shows the greatest respect for his fellow sailors. He is certainly a worthy winner of this award. 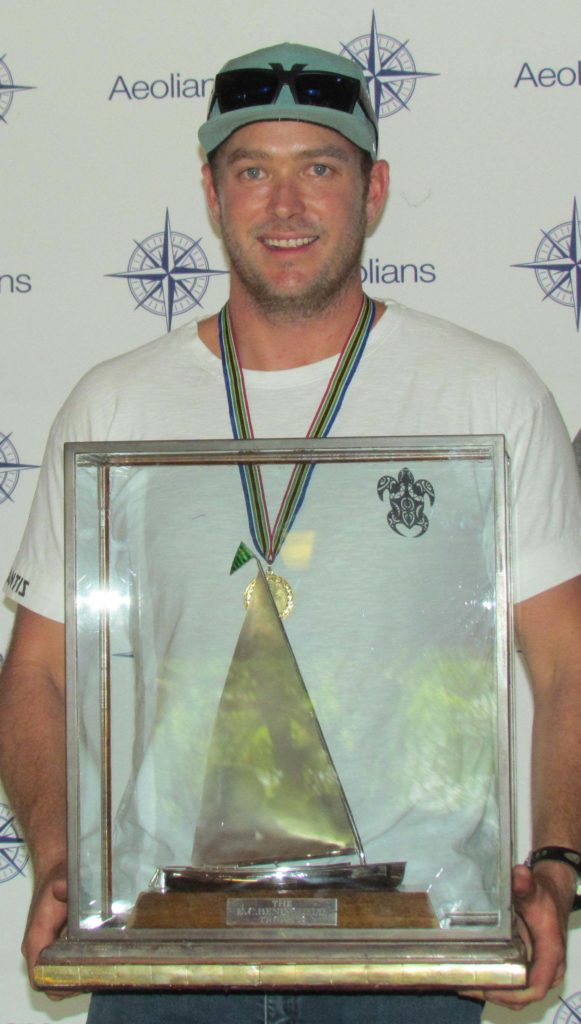 ANYONE CAN MAKE NOMINATIONS
The award is strictly for ‘sailing excellence’ or in exceptional circumstances, for ‘dedication to the sport’.

It is also an individual award, although in exceptional circumstances, a team will be considered.

Who can make nominations? Anyone may submit nominations. There is NO requirement for a Club, Class or anyone else to sanction or approve a nomination. So a skipper can nominate his crew, or vice versa, as our judges require a good cross section of achievers from who to select the monthly winner.

The identity of the person submitting the nomination is NEVER made public, nor passed on to the panel of anonymous judges. The judges therefore only judge on the merits of each nomination.

Nomination Procedure? Nominations must be fully motivated in writing, and accompanied by a head-and-shoulders picture of the candidate, and if possible an action sailing pic aboard his/her boat. Motivations must include current performances, a brief CV of the nominee, and other pertinent, personal background information (age, school, employment, home town etc) so that an interesting editorial on the winner may be written.

Submissions to be e-mailed to: editor@sailing.co.za


Roll of Honour – Sailors of the Year