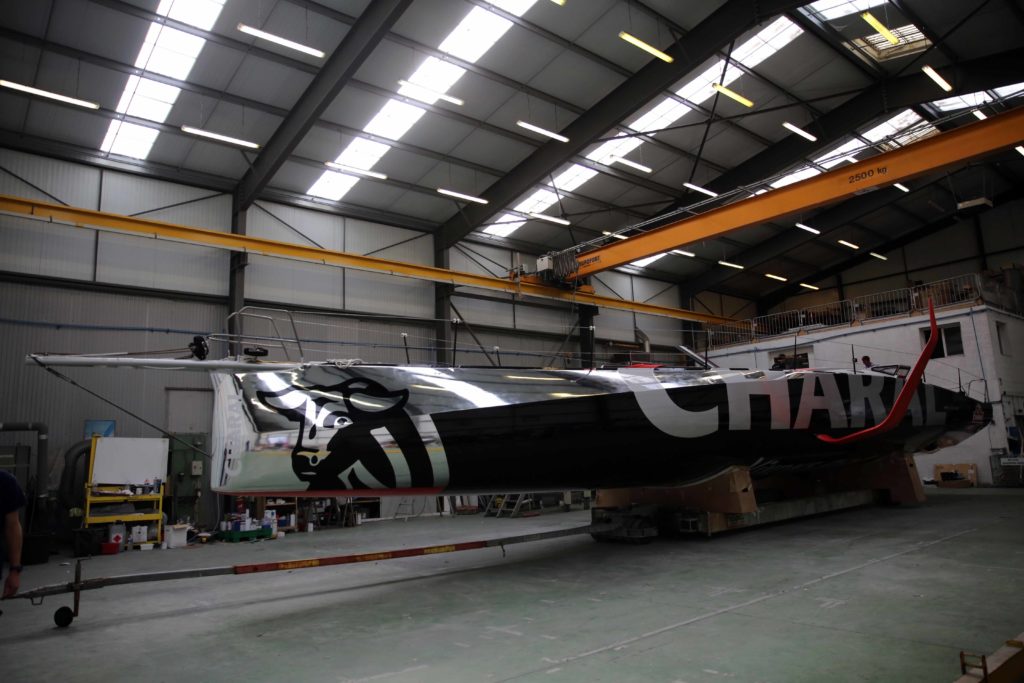 A first view of Charal.
pic by CDK Technologies

During the last few days the latest IMOCA 60 monohull was launched amid much fanfare – and just looking at the pics should reveal why!

She’s shiny bright, she looks slippery and fast, she has chiselled lines and she has been built with the 2020 Vendee Globe Challenge as the main goal.

She is CHARAL, an IMOCA 60 (International Monohull Open Class Association) which was designed by VPLP design for Jérémie Beyou, and built by CDK Technologies, in Port-la-Forêt.

She is the very latest generation boat – and is built with power and lightness as key elements, with her foils at the heart of both the concept and the construction. This is the first IMOCA 60 entirely thought and designed around the foils.

Her first major outing, and test, is the Route du Rhum in November this year. 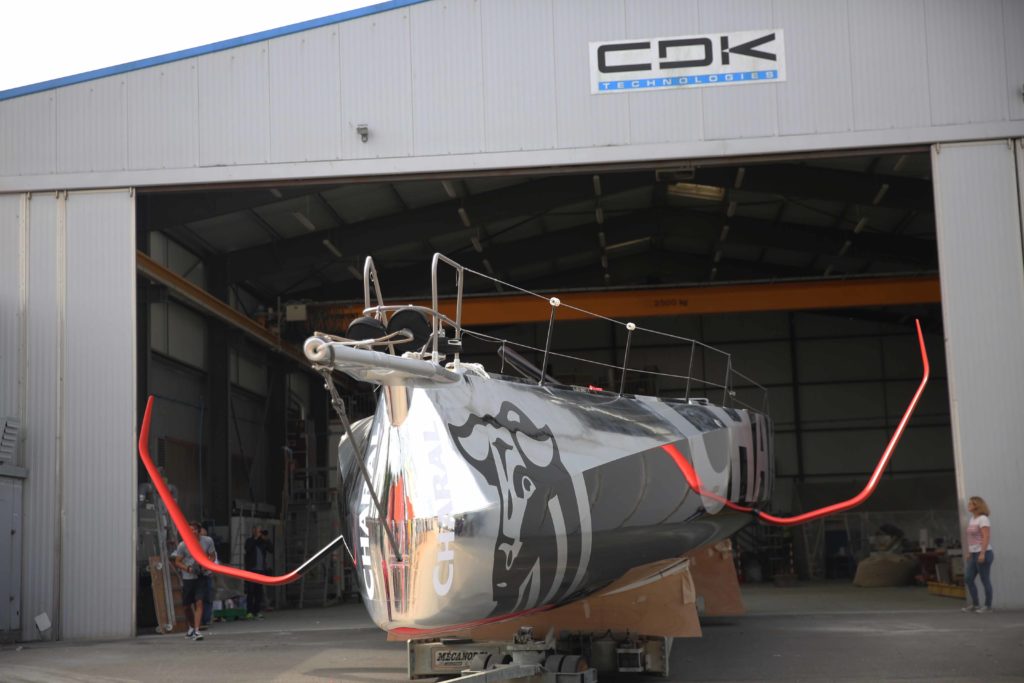 As she emerges more of her radical lines are revealed.
pic by CDK Technologies

Here are some thoughts on her design and build, written in French and translated to English – so explanations may not be as clear as one would like – but hey, this is a extraordinary machine which takes time to get one’s head around!

• For months now Jérémie Beyou and Pierre-François Dargnies, technical director of Charal Sailing Team, had promised surprises. What has been revealed came as a shock to some as its foils are so wide and so long, the monohull looks almost like a multihull. Its hull too, from its ‘frégatée’ bow to the very rounded transom, shows a break with the existing. Welcome to the new era of IMOCA. Welcome to the kingdom of foils. Welcome to the extreme.

• These first edges will obviously be the initial step of the long road that will lead the IMOCA 60 CHARAL to the starting line of the Vendée Globe, in November 2020. “We wanted to launch this boat before the Route du Rhum – Destination Guadeloupe (starting November 4) to benefit from an additional year of preparation and modifications, explained Pierre-François Dargnies. We know that the boat that is launched today is not the one that will run the Vendée Globe. We have two years to make this first IMOCA ever built for and around the foils a real rocket for the Vendée Globe”. 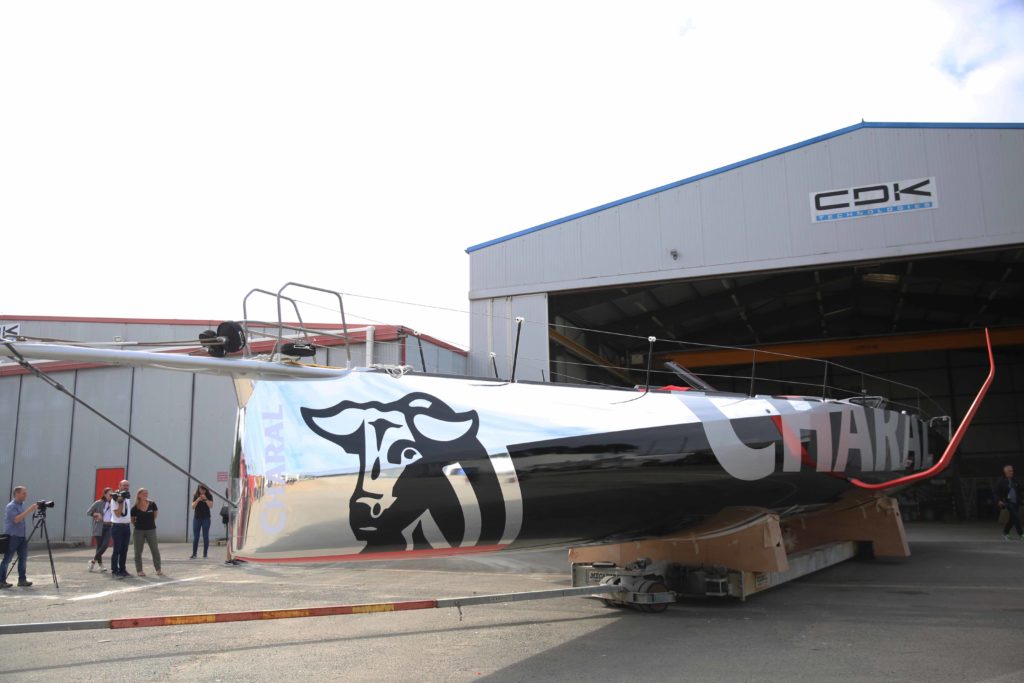 Wow! It just keeps getting better.
pic by CDK Technologies

• Jérémie Beyou: “Our choice was to make foils that grow strong, to get maximum power and lift (lift effect). The shaft is very long, the tip too, and it has a two-surface elbow, with two different angles, which accentuates the visual impression. They are relatively thick too, because we will exert a lot of efforts of arching on the tip. If the boat gives the impression of being so wide, it is because one can not go up at the same time the two foils: there will always be one at the bottom “.

• An innovative hull says Pierre-François Dargnies: “Since the idea was to use the foils to get the power, it was necessary to design a hull that limits the drag, knowing that the gauge does not allow the total flight. This results in a very innovative hull, with a very ‘frigated’ bow, a very rounded and closed transom”.

• The concentrated living area. Pierre-François Dargnies: “The specifications of Jeremiah suggested us to put at the same level the work area and the living area, as on the Ultimes. It turned out that it would be too penalizing in terms of the centre of gravity, so we traded. We designed a boat where the skipper can spend most of his life in the cockpit and reach almost without moving the winches, the bar, the chart table and the kitchen. The idea is to go down as little as possible indoors. Jeremy will be out all the time, but in a very wind and watertight space, thanks to the non-retractable cap”. 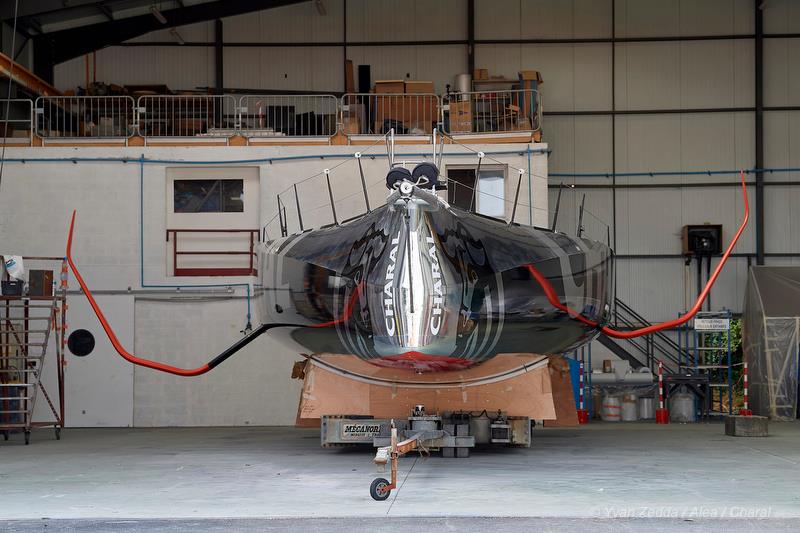 With foils in place she looks almost prehistoric!
pic by Yvan Zedda/Alea/Charal

• Sensors worthy of F1. Jérémie Beyou: “Everything that supports major efforts – rigging, appendices – is equipped with sensors and fibre optics, which send real-time information on my navigation console to be processed by software that allows me to have the good reading of the situation. But unlike F1 or Ultim, this information is not transmitted to the ground: I am the only one who can read this information and can act accordingly, manually only”.

• Yann Dollo, CEO of the CDK yard and Capucine Cadiou, engineer within the CDK Technologies design office in charge of the Charal project, give us the low-down on the various stages in the construction of the 60 monohull Charal.

Yann Dollo: “It’s the big reveal. Back in March, we discovered what Charal’s hull looks like from the outside. That moment in time is a very important stage for the whole of the CDK team. At that point, we discovered a very special, characteristic, honed shape in relation to the previous generation IMOCAs designed specifically for sailing with foils.

“What’s also revealed is the perfect condition of the hull below the waterline thanks to the construction and cooking techniques fine-tuned by CDK Technologies.

“These two elements – a honed shape and a perfect hull below the waterline – translate as a certain degree of perfection, which is synonymous with performance.

“Beyond the satisfaction of the teams at CDK, this equates to little additional finishing off work and hence less weight. This came as a real boost to the team at a time when they had already put a lot of work into the project.” 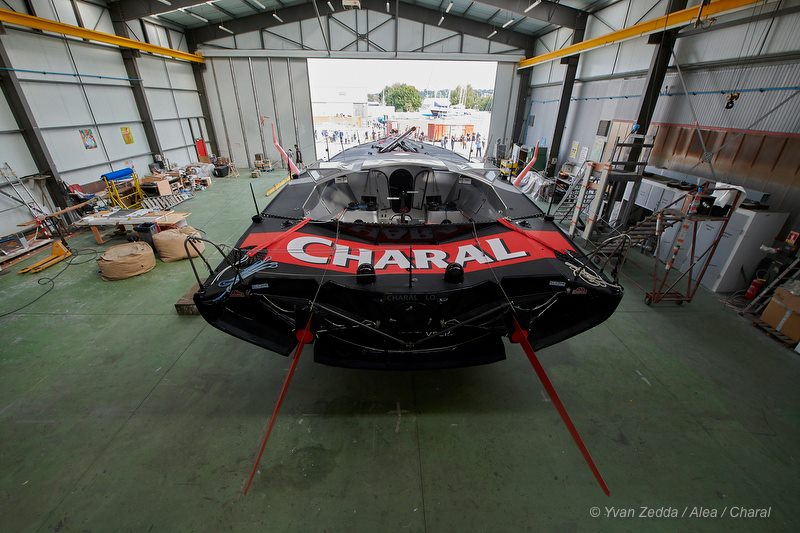 Her stern section is a radical departure from the norm.
pic by Yvan Zedda/Alea/Charal