So this is how it’s done in France when it comes to sailing sponsorship. Take a mainstream company, one that started out specializing in frozen pizzas which are consumed broadly across France on a daily basis, and have their marketing people decide that the best way to increase brand awareness is to get involved with sailing; yes sailing. Not soccer, not rugby, not tennis, but our sport. Sailing. Who would have thought? When you try and pitch a mainstream US company on the idea of sponsoring sailing you get a kind of glazed over incredulous look as if you had just asked them to consume a pound of raw beef. Imagine going into a meeting with the marketing executives at Pizza Hut and pitching them on the idea of building a 120-foot trimaran for one person the sail alone around the world. I think you would pretty much be frog-marched out the front door for wasting their time. But that’s not how it works in France. 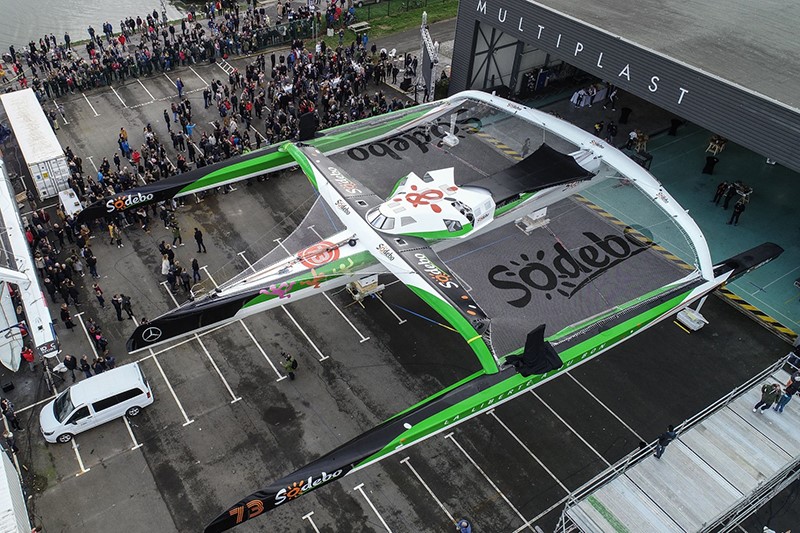 Sodebo, one of France’s most popular national brands, and one that makes a lot more these days than just frozen pizza, decided back in 1999 that they wanted to get into the sailing arena. They put word out that they were in the market to sponsor a boat in the Vendée Globe and were looking for a skipper. Imagine that. A company looking for a skipper, not the other way around. I have no idea how many applicants applied and I don’t know what criteria they set, but I presume that the person had to have been a top sailor and judging by the person that they chose, he/she would have to be good looking. For the record I am 100% heterosexual, but I think that Thomas Coville is an incredibly good looking man; and without a doubt, an amazing sailor, and he was chosen by Sodebo to be their man. I have met the owners of Sodebo, it’s still a family owned business, and they are gracious and thrilled by their sponsorship of Coville. “Thomas is like family to us,” they told me.

That synergy between sponsor and athlete was once again on public display this past week when they revealed to the world the latest Sodebo trimaran, a futuristic space-age looking machine designed, engineered and created for one simple mission; to once again set a new record for the fastest solo, non-stop circumnavigation.

Just when you think these boats can’t get any more amazing, they get more amazing. The first thing that is strikingly different is that the cockpit is forward of the mast. I love the way Coville describes this dramatic shift. It’s uniquely French and reveals quite a lot about how the French view life, and sailing. “In the 50s, pilots were at the back of their planes. They were protecting themselves with small glasses and a leather helmet, it was very romantic. And then one day the pilot realized that the more one pushed on the wings, the more it answered. It’s the same with ‘Sodebo’ Ultim 3. Having the cockpit in front of the mast will greatly improve the manoeuverability of the boat. The cockpit is completely integrated and looks like an aeroplane cockpit.”

Look at those foils. 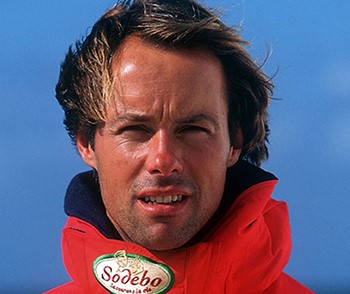 It has been two decades since Sodebo and Coville joined forces. In that space of time there have been many victories and some incredible accomplishments. In their first foray with the Sodebo branding Coville, along with fellow Frenchman Hervé Jan, won the Transat Jacques Vabre. Thomas then went on to finish sixth in the Vendée Globe, but in the last decade his obsession and main focus has been with the solo, non-stop circumnavigation record. In 2008/09 he set off to attempt to break the record held at that time by Francis Joyon, but sadly came up short finishing his lap of the planet two days longer that it had taken Joyon. He tried again two years later and again came up short this time taking three days longer than the record time. Coville is not one to give up easily and in 2016 he set off again in a new, larger boat and obliterated the record knocking a full week off Joyon’s time. That elusive notch-on-the-belt was finally his, but not for long. Fellow Frenchman François Gabart aboard is trimaran ‘Macif’ went on to obliterate Coville’s record setting the bar now at an astounding 42 days and 14 hours.

It remains to be see if this brand new latest generation Ultime trimaran will have the speed needed to break the record. My feeling is that it will be significantly faster than anything currently out there but in the end, like horse racing, it comes down to the jockey. Thomas Coville is 50 years old and we all know that there is only so much one can ask from an aging body, but there is definitely hope. Let’s not forget that Francis Joyon was 52 when he set his record back in 2008 and he consistently raises the bar. Indeed last year Joyon won the gruelling Route du Rhum solo race from France to Guadeloupe at the age of 62. I guess that there is hope for us old guys yet, but one has to ask, “what’s in the water in France?” They are consistently producing these extraordinary athletes who amaze us with their ability to circumnavigate the globe and return looking like they have just been out for an afternoon sail on the Bay of Biscay.