Hannah Stodel: Paralympic sailor on tackling the Vendee Globe and the Round the Island Race 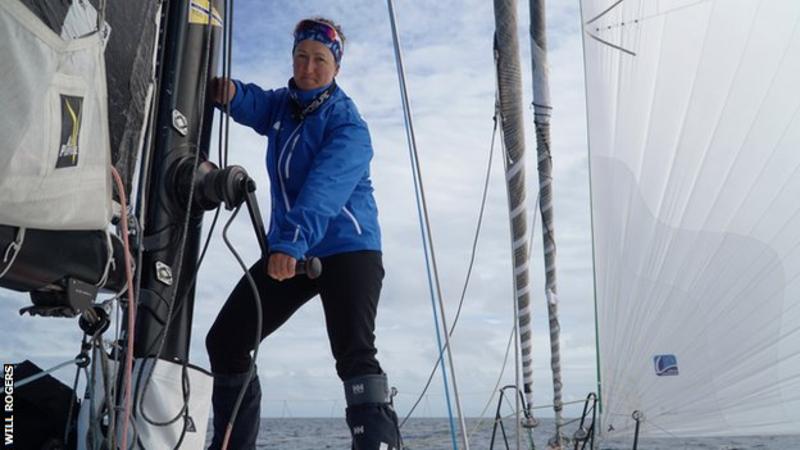 Hannah Stodel won mixed sonar World Championship gold in 2005, 2006 and 2015 alongside John Robertson and Steve Thomas.
Pic by Will Rogers

“I am a strong person, I’m pretty tough stuff.”

You have to be, when you’re planning on racing non-stop around the world, on your own, in a 60ft yacht.

At face value, the Vendee Globe is a remarkable challenge. But for British four-time Paralympic sailor Hannah Stodel, it is a different beast entirely.

Born without her lower right arm, starting next year’s race would be Stodel’s greatest achievement – the “icing on the cake”, as she describes it.

Not only could she become just the eighth woman to attempt the prestigious unassisted race, she would be the first disabled person to compete – and the first “authentic single-handed sailor”.

“I met Ellen MacArthur in 1998 when she was in the run-up to her Vendee [in which she finished second], and she put the idea in my head,” Stodel, 33, told BBC Sport.

“She was told she wouldn’t be able to do it because she was a woman and she was too small, how would she cope? But she breezed past all that and showed us all what was possible with a bit of self-belief.

“I really want to inspire people with the journey. If I can kick down these doors, other people can take on things that they didn’t think were possible.”

‘Are you crazy?’ – tackling the Vendee Globe.
The Vendee Globe cannot be taken lightly. Described as the “Everest of the seas”, it pushes its sailors to their endurance limits and, to date, only 53% of those who have started the race have crossed the finish line.

“You get two reactions. You get the ‘are you certifiably crazy?’ or the ‘wow, that’s pretty cool’. It’s mostly the latter, especially in the sailing community,” Stodel says.

“Even some of the greats – Ellen, Sir Robin [Knox-Johnston] and Mike Golding – all these people are coming forward to help and offer advice having done the race.”

Stodel has mostly competed as part of a three-person team, but the Vendee Globe would see her very much on her own.

As a result, her boat has had to be adapted to suit her needs.

“We’ve really had to think outside the box,” she says. “Mast-climbing is going to be an issue, as well as things like how do I get the sails down? In a big sea, how do I hold on while doing that?

“There will be times when I have to sacrifice performance for safety, but in the overall grand scheme, that doesn’t matter.

“It’s a real privilege. Ellen did it before me as the first female, but it’s a big undertaking. It’s a huge challenge that I have set myself.

“Every day is another part of the adventure and I am honoured to be on this journey.”

‘Sailors with a disability are just the same’ – proving people wrong. 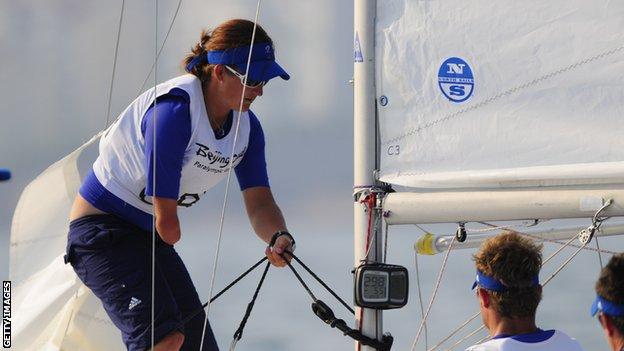 Hannah Stodel at the Beijing Paralympics in 2008. She represented Great Britain at four Paralympic Games.
Pic by Getty Images

Following in the footsteps of her parents, Stodel took up the sport as a child and competed with and against able-bodied sailors.

Bullied at school because of her disability, it was her way of escaping, but she saw the “Paralympic stuff” as the “weaker option”.

“To me, there was no reason why I needed to do that when I could race with everybody else,” she says. “At that age, I wanted to be like everybody else. I wanted that normality.”

But training with former Paralympic sailor Andy Cassell – who won gold at the Atlanta 1996 Games – at the age of 15 changed her perception, and Stodel has since gone on to win three World Championship titles.

She also represented Great Britain at the Athens, Beijing, London and Rio Paralympics, but after the sport was dropped from next year’s Games in Tokyo, she knew it was time to finally take on her childhood dream.

“It’s taken me a long time to come to terms with the disappointment of the Paralympics,” she says. “We were all absolutely gutted about it.

“With the Paralympic programme as it is, it is the right time to show people that sailors with a disability are just the same.

“We want to prove that it is an inclusive sport, that if I can go out and race against the able-bodied men, then that’s definitely the case.”

Inclusive it is and nowhere is that more apparent than at the Round the Island race, which Stodel “absolutely loves” and will be taking part in this year on 29 June.

The world-famous race takes place every year and sees more than 1,400 boats circumnavigate the Isle of Wight.

“It always surprises me how many people, not only disabled people, do it. That’s the point of the race, it doesn’t have to be all high-end boats, it can be a day-to-day cruiser or your wooden boat.”

When Stodel steps ashore at the end of the Round the Island race, she will have 17 months to ensure her place on the Vendee Globe start-line.

It’s a challenge she’s not daunted by, yet one she is determined to achieve.

“It’s been a tough slog, and if we don’t make next year, then we will be going for the next one,” Stodel says.

“It inspires me every day to keep fighting. It’s such a massive challenge.”