Golden Globe Race. They’re Off Around the World 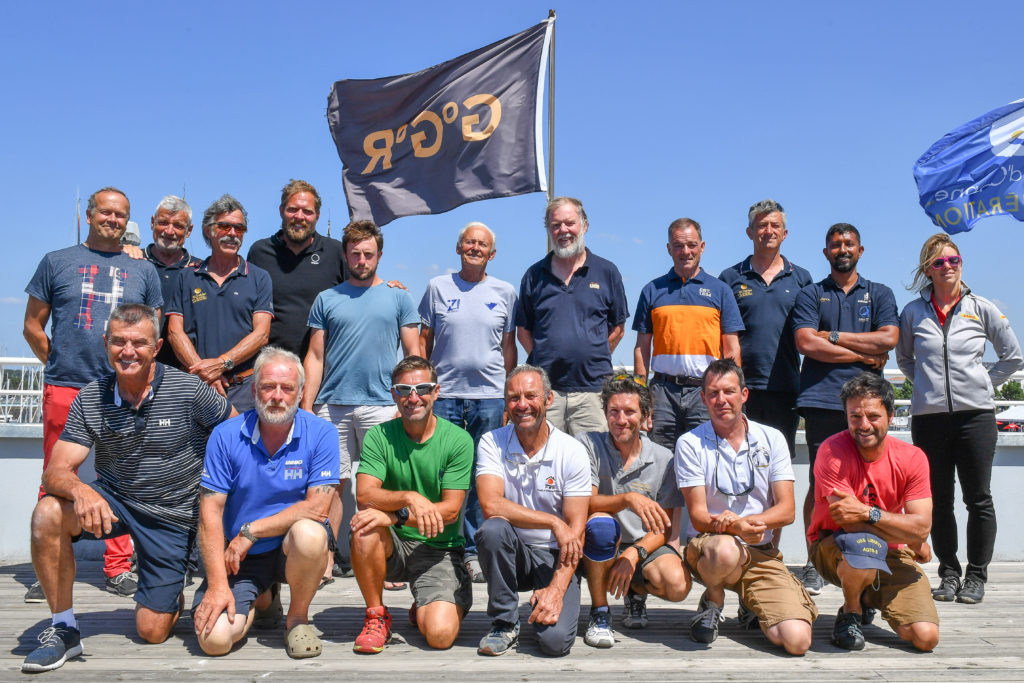 They have 30,000 miles to sail over the next 9 – 10 months, but judging from the start yesterday of the 2018 Golden Globe solo non-stop around the world yacht race from Les Sables d’Olonne, the leaders will be fighting over every mile.

First to cross the line at Noon (CEST) was the fiercely competitive Frenchman Philippe Péché aboard his Rustler 36 PRB. He has ensured that she is one of the lightest in the 18-strong fleet, and carrying a huge lightweight genoa, Péché pulled out a 100 metre lead within minutes of Sir Robin Knox-Johnston, winner of the first GGR 50 years before, had fired the canon from the deck of his historic yacht Suhaili.

Behind him, Jean-Luc Van Den Heede, who has five previous circumnavigations to his credit and at 73, is the oldest skipper in this Race, appeared to tangle with Tapio Lehtinen’s Finnish yacht Asteria, and one hour after the start were still locked in a 3-way tie with Dutchman Mark Slats (Ohpen Maverick) for third place. Their regatta style tactics allowed Russia’s Igor Zaretskiy to sail his Endurance 35 Esmeralda quietly into second place. 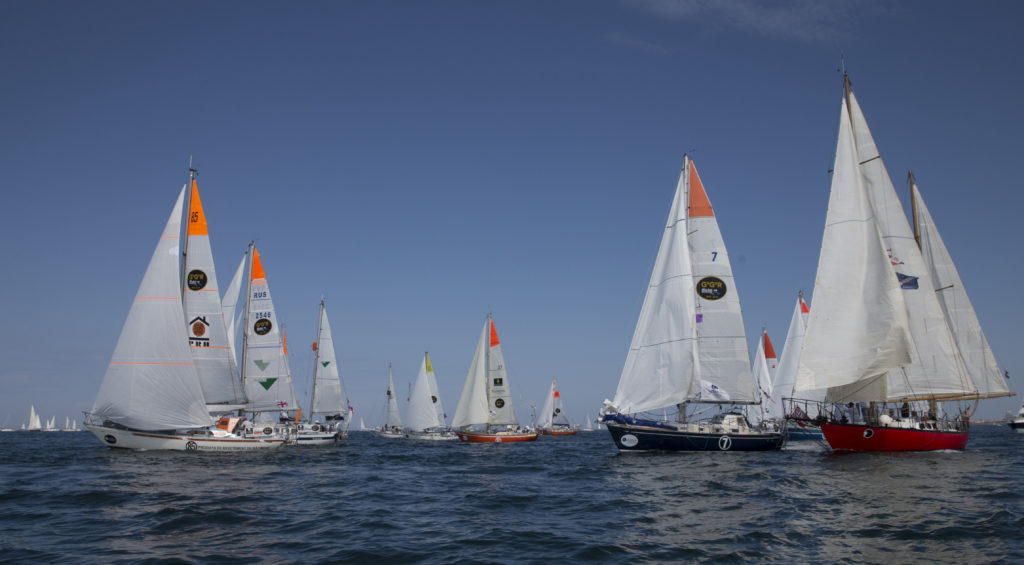 The start of the 2018 Golden Globe Race off Les Sables d’Olonne, France.
Pic by Tim Bishop/PPL/GGR

Another in the mix was Are Wiig’s 32ft Norwegian double-ender Olleanna along with Indian Navy pilot Abhilash Tomy sailing a wooden replica of Sir Robin’s Suhaili.

The dark horse within the fleet appears to be Nabil Amra’s Palestinian flagged Biscay 36 Liberty II, which was one of the last boats across the line, but last night was flying through the fleet at 4.6knots as apposed to 4.2 for the leaders. Like Igor Zaretskiy, he is taking a more southerly route towards Cape Finistere while others were heading well out into the Bay of Biscay in the hope of finding stronger winds. 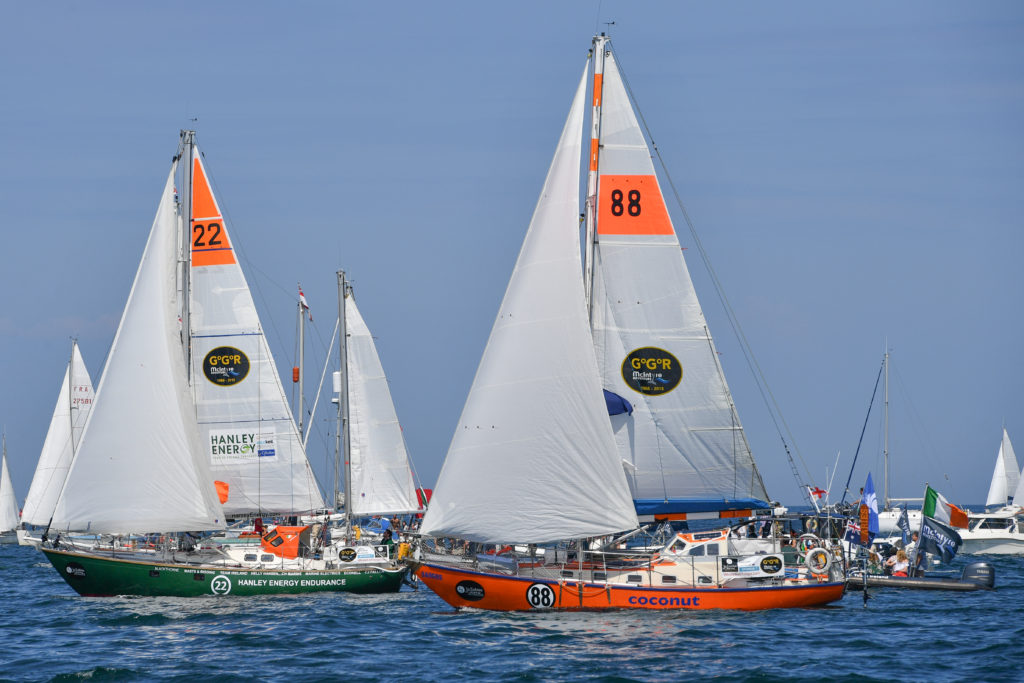 One skipper, Italy’s Francesco Cappelletti, remains in port preparing his Endurance 35 007. The yacht has still to pass safety inspection and Cappelletti has yet to complete 3 days of solo sailing trials. He has until Noon next Saturday to beat the deadline to join the race.

The leading yachts are expected to reach the first ‘gate’ set off Lanzarote in the Canaries around 11 July to hand across film and letters.

Alex Carozzo, the 86 year old veteran from the 1968/9 race who was forced to spend 5 days sitting on a mooring in isolation off Cowes England, completing preparations to his 60ft yacht, while the rest were making ground around the world, has been watching his own story replayed here by fellow Italian Francesco Cappelletti, the 40-year old professional sailor from Pisa. Delays in the preparation of his Endurance 35 Esmeralda in Italy, led to the yacht being shipped by road directly to Les Sables d’Olonne, arriving here on Monday. She is now rigged and in the water, but Cappelletti still has a mountain to climb to finish his preparations, load stores and complete 3 days of solo trials before the start line closes for late starters at Noon on Saturday 7th July.

“It is disappointing. I would much prefer to be ready now, but I expect to pass safety inspections on Monday, complete my sailing trials by Thursday and start either on Friday or Saturday morning.” He said before the race started.

Worth following is the South African built Lello 34 named Coconut being sailed by Australian Mark Sinclair. 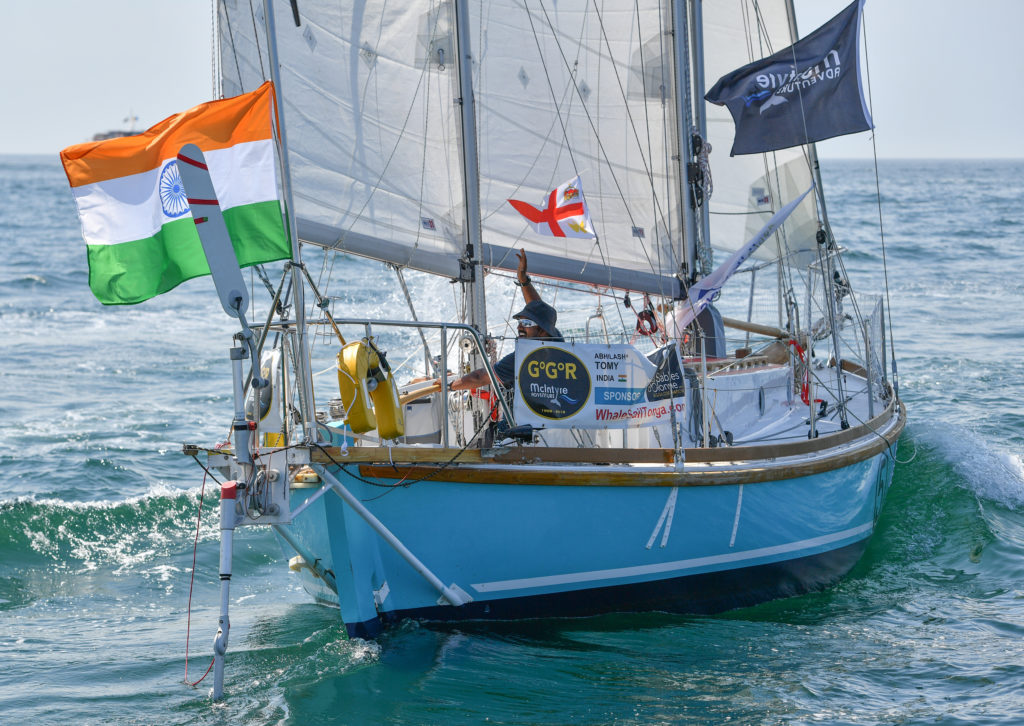