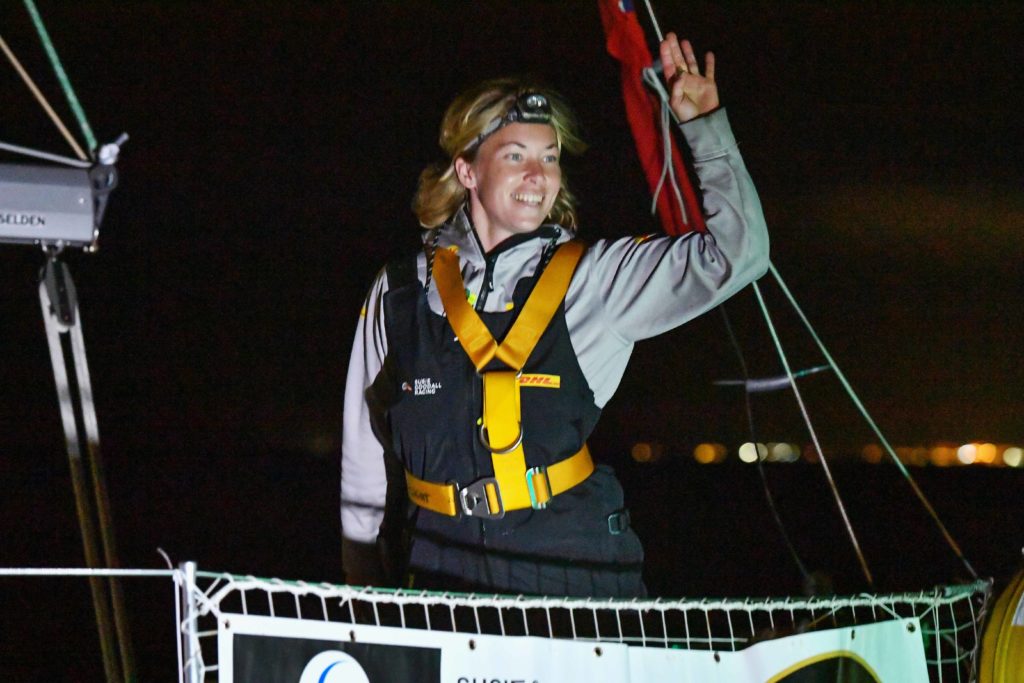 British yachtswoman Susie Goodall was pitchpoled and dismasted in the Southern Ocean some 2,000 miles west of Cape Horn.

A distress signal was first picked up from her yacht by Falmouth Coastguard at who then alerted Race Control and the Chilean Maritime Search and Rescue authorities responsible for this sector of the South Pacific.

Goodall, (29) from Falmouth UK, and the youngest competitor in the Golden Globe Race, was lying in 4th place at the time, riding out a ferocious storm with 60 knot winds and massive seas aboard her Rustler 36 yacht ‘DHL Starlight’.

Goodall’s position was 2,000 miles West of Cape Horn when the storm struck, and those of her nearest rivals in this solo non-stop round the world race.

In her last text message to Race Control received before the dismasting she reported’ TAKING A HAMMERING! WONDERING WHAT ON EARTH I’M DOING OUT HERE.

After 3 attempts, Race HQ was able to raise Goodall on her emergency satellite phone when she confirmed: “I have been dismasted. Thought I had holed the hull because the boat filled with water, but the hull is NOT holed. The hull is OK.

The boat is destroyed. I can’t make up a jury rig. The only thing left is the hull and deck which remain intact.

We were pitchpoled (rolled end over end) and I was thrown across the cabin and knocked out for a while. ”

Speaking with emotion, but sounding very much in control of her situation, Susie also confirmed that she had secured all hatches, portholes and safety equipment, and did NOT need immediate assistance. She said that before the incident, she had been enjoying the conditions and felt in control. But then the safety tube on her Monitor self-steering broke and she was forced to trail a drogue anchor astern and take down the mainsail. She was below decks when the boat was pitchpoled, and when she returned on deck to assess the damage, found that the line attached to the drogue had parted.

Goodall also reported that she ‘has been beaten up and badly bruised’ with cuts and scratches and a big bump on her head. MSOS, the GGR’s 24 hour medical telecentre has been advised and doctors are now monitoring her symptoms and providing direct medical advice.

The winds have since dropped down to 45 knots and conditions are likely to improve further as the storm continues to head East.

The nearest GGR competitor is Estonion Uku Randmaa 400 miles ahead of Goodall and about to face the same storm conditions, so it is impractical for him to turn about. It is far safer for American/Hungarian Istvan Kopar, 780 miles to the west to continue his downwind course and intercept ‘DHL Starlight’. The GGR fleet have now been alerted to her situation and Kopar expects to reach her position in six days time.

Subsequently, the Chilean Authorities have contacted a ship 480 miles SW of Goodall’s position and requested assistance. Her Captain expects to take 2 days to reach the area.

Race Chairman Don McIntyre said today: “We are monitoring the situation carefully, speaking to Susie every hour and working with the Chilean Search and rescue authorities on the best course of action to take. We have also informed her family and are keeping them informed”.