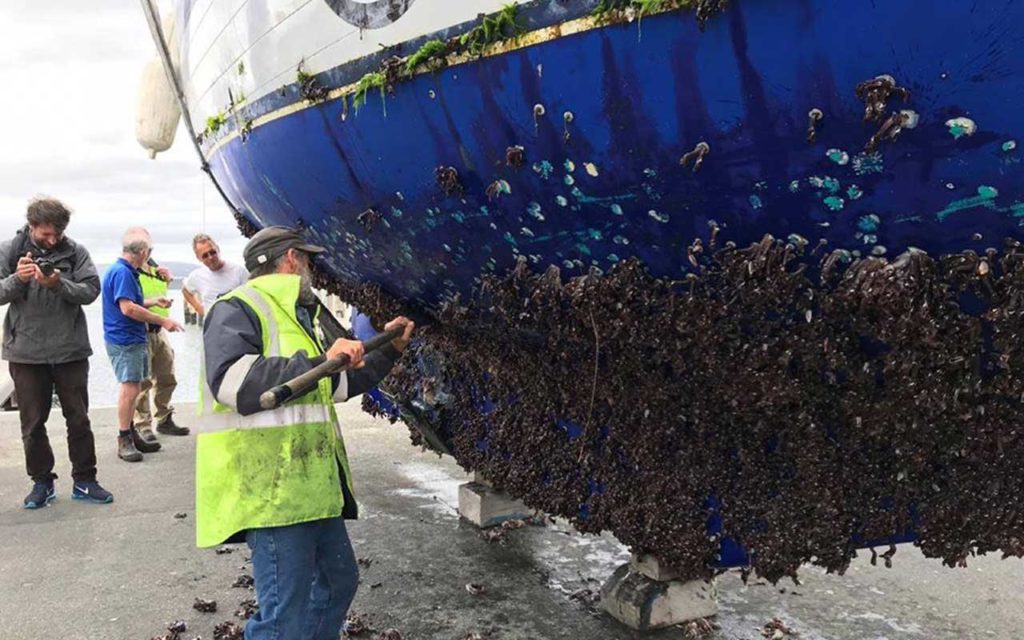 The barnacle growth on Igor Zaretskiy’s yacht, was slowing her down by 2 knots.

As French race leader Jean-Luc Van Den Heede works to protect his shrinking lead over second placed Dutch rival Mark Slats, the focus is once more on a violent storm in the Southern Ocean that looks likely to overtake fourth placed American/Hungarian Istvan Kopar on Friday.

Race HQ has given permission for Istvan to take evasive action and move south into the NO-GO Zone, just as Estonian Uku Randmaa did to avoid the same storm that left Susie Goodall dismasted and in need of rescue a week ago.

Race Chairman, Don McIntyre says: “We have just advised Istvan to head south as fast as possible. We hope he can make at least 180 miles, which is the lower marker on the distance track. We then have to hope the forecast track of this storm will be correct. Going South has risks because it takes him closer to the centre of the storm and sudden wind shift zone? But if he gets south he may miss the worst of it.

Yesterday we alerted Istvan to run East as fast as possible to try and outrun the worst of the weather, but since then the storm has intensified and changed direction. It is for Istvan to decide what to do . GGR can only offer advise and we are updating him every 12 hours.” 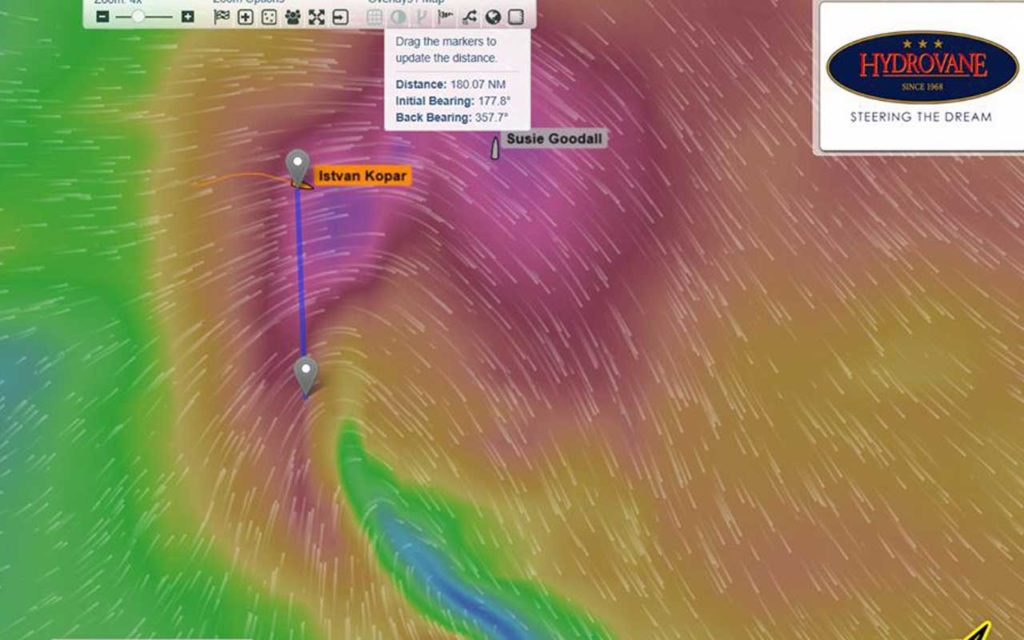 This weather overlay shows the predicted position of the storm and the point 180 miles south where Race HQ has advised Istvan Kopar to be in order to avoid the worst of the weather.

Lead Narrows Between Mark Slats and Jean-Luc Van Den Heede
Jean-Luc Van Den Heede tacked to within sight of Rio’s Copacabana Beach today and is now entering the zone of headwinds that is likely to slow his progress considerably. The 73-year old has climbed ‘Matmut’s’ mast again to check that his repairs to the lower shroud tang fastenings remain secure and seems happy enough for now, but these headwinds will concentrate his mind on protecting the rig on his Rustler 36 at all cost. This will invariably slow the Frenchman down.

‘Matmut’s’ lead over Mark Slats rival Rustler 36 ‘Ohpen Maverick’ is down to 946 miles, a loss of 76 miles during the past 9 days. That’s not enough of an average to overtake the Frenchman, but Slats knows this could all change during the next two weeks. He is hand steering much of the time, including at night, driving the boat hard and surfing on the best waves, knowing he can make big gains on the leader. His boat is in good shape and he is feeling strong and excited at this new race to the finish. The finish back in Les Sables d’Olonne is still some 5,000 miles way, but for Mark every hour of the day is important! He knows that anything can happen, so he has to be careful himself, but is charged with excitement. Can he make up the difference?

One to miss her rivalry is Istvan Kopar who had been 780 miles behind when her yacht ‘DHL Starlight’ was pitch poled and dismasted 7 days ago. But Kopar has his hands full. Not only is he facing a similar storm, but is struggling with major steering issues on his Tradewind 35 ‘Puffin’ and also running very short of water. Nor does he have a working radio to pick up weather reports so is reliant on Race HQ to advise him about approaching storms as a safety measure. For now, he sits fourth overall – an amazing achievement considering. And perhaps this storm will have a silver lining and bring him rain!

Barnacles
While Uku Randmaa’s barnacle ridden Rustler 36 ‘One and All’ was making 5.7 knots today, the Estonian has revised his ETA to round Cape Horn from Monday 17th December to the 19th, fifth placed Tapio Lehtinen missed the opportunity two days ago to finally scrape clear the barnacles slowing his Finnish flagged Gaia 36 ‘Asteria’. The weather was calm without wind, but just as he was about to dive overboard, two sharks arrived and circled the boat for the rest of the day. His only consolation came with the text message: SHARKS EATING THE BARNACLES (I THINK) SO DIDN’T NEED TO SWIM!

Tapio has since reported a leak in the bow, which he is trying to fix, and though he now has the winds from the right direction for a change, he is still making slow progress across the South Pacific and must wait for the next calm to finish off what the sharks began. 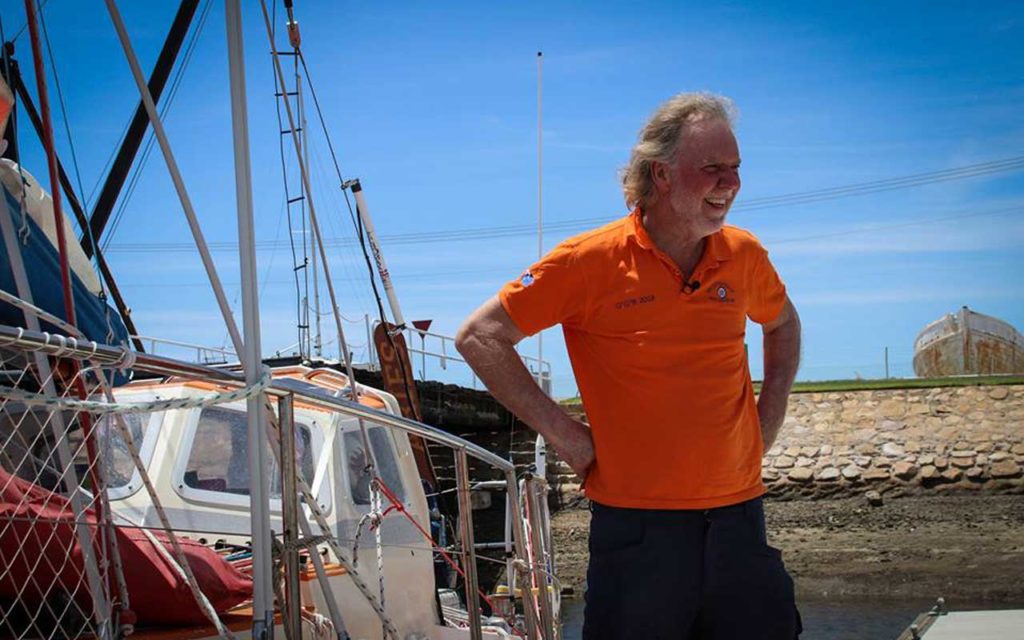 Mark Sinclair is philosophical about his withdrawn from the Race. “I’ve enjoyed every moment of it” He says.

Mark Sinclair – ‘Capt Coconut ‘– Retires in Adelaide
Australian Mark Sinclair whose Lello 34 ‘Coconut’ has also been plagued by barnacle growth, reached his home port of Adelaide last week just as his water supplies ran dry. He has decided to retire from the Race. Speaking by phone, he says that barnacles had slowed his yacht considerably, and though a team of friends had rallied round to clean the hull and make other repairs to the boat, he was concerned that reaching Cape Horn in early March was a little late in the season.

Igor Zaretskiy Reaches Albany to Make Repairs
Barnacles also proved the downfall of Russia’s Igor Zaretskiy who put into Albany, Western Australia on Wednesday to clean the hull of his Endurance 35 ‘Esmeralda’ and replace a broken forestay. He blames the barnacles on a simple error of judgement made two days before the start from Les Sables d’Olonne, when he slipped his boat to wash the bottom and did not take the opportunity to apply another coat of antifouling.

Zaretskiy is now demoted to the Chichester Class for making a stop and hopes to set sail again on Monday. This leaves just 5 of the original 17 starters competing in the Golden Globe Race