CRAZY IS AS CRAZY DOES

Happy New Year – let’s hope that 2019 is a year filled with crazy sailing stunts.
I know, that’s an odd wish, but two sailing related stories in the news caught my eye this past week and it’s worth commenting on them.

But first… It used to be a big deal to sail across an ocean or around the world. My first circumnavigation was in 1981 and we were part of a small group that had made it all the way around the big blue marble blown just by the breeze. It was a big deal, but these days circumnavigating has become pretty routine. There are many people who have done multiple circumnavigations and still continue to do them. It’s an addiction. There are records for the fastest, the slowest, the stupidest, the weirdest and recently I read about a true single-handed sailor that sailed single-handed. In the recent Route du Rhum, which is a solo race from France to Guadeloupe, there was a competitor that had only one hand. He had lost his other hand in an accident. A true single-handed sailor.

With that in mind it’s getting increasingly hard to do something that has not already been done before. You have to be quite innovative and usually the French are the best at coming up with some crazy idea; and pulling it off. But this most recent stunt is the stunt to beat all stunts.

A 71-year-old Frenchman has set off across the Atlantic Ocean in a large orange barrel hoping to float to the Caribbean. His name is Jean-Jacques Savin and he left the Canary Islands in a barrel-shaped capsule which he had built himself. Since leaving he has been travelling at one to two knots and he expects to float the almost 3,000 miles pushed by the wind and pulled by the currents. He has no means of steering but hopes that he will end up in Barbados before the end of March – 2019. I have news for him. At his current (pun intended) speed he will be lucky to get there before March 2022. But fear not. Like most French he planned appropriately by stowing away a bottle of Sauternes white wine and a block of foie gras for New Year’s Eve, and a bottle of Saint-Émilion red for his birthday in January. I dunno. I am all for adventure but seriously. A transatlantic crossing in a homemade barrel? I think going over Niagara Falls in a barrel is a smarter idea. 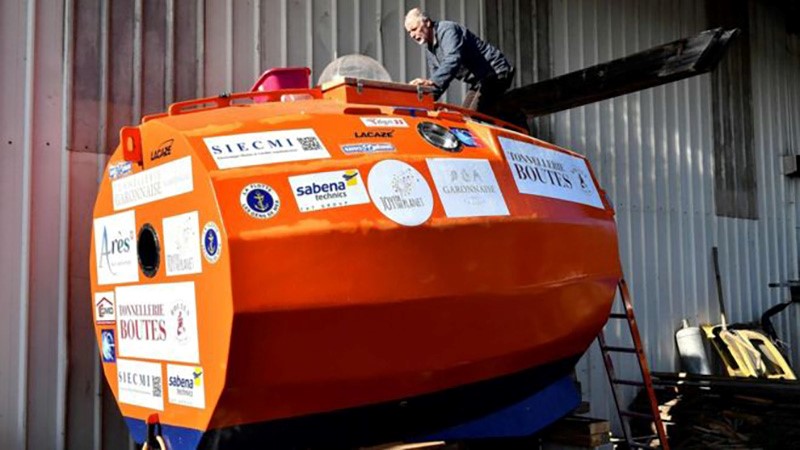 The other item that caught my eye was the reappearance of an old Open 40 sailboat that had been abandoned in the Southern Ocean eight years ago. The boat was originally commissioned by my friend Alan Paris for the 2002/03 Around Alone race. Alan had a very successful circumnavigation and then sold the boat which eventually ended up in the hands of the California teenager Abby Sunderland. Sunderland had plans to become the youngest person to sail solo around the world and there was much speculation at the time about the motivation behind her voyage. Her older brother Zac had previously sailed around the world to become the youngest person to do so. He was 17 when he returned. The story was that her trip was an attempt by her father to create a reality tv show about it and despite the fact that she had very little experience she took off from California in a woefully unprepared boat. Not surprisingly she only made it as far as Cabo San Lucas in Mexico. That was probably where this misguided idea should have ended but powered by her Christian faith and an overbearing father seeking fame and fortune, she took off again on February 6, 2010 heading for Cape Horn.

Her boat had been renamed Wild Eyes and while she did make it around Cape Horn becoming the youngest person to ever do so single-handed, she stopped in Cape Town to get her autopilot repaired and that effectively squashed her chances of a circumnavigation record. On the morning of June 10, 2010, she was sailing in high winds in a remote area of the Indian Ocean northeast of the Kerguelen Islands, about 2,000 miles west of Australia. Apparently the boat had been knocked down numerous times and it was dismasted. Sunderland set off her EPIRB and she was later rescued.

The reason that this is a story in 2019 is because her boat was recently spotted off Kangaroo Island off the coast of Australia. The boat was upside-down and covered in barnacles but amazingly still afloat. For eight long years Wild Eyes has been a hazard to shipping and other sailors because Abby did not make plans to sink the yacht sink after she abandoned it. I don’t know – I wasn’t there – but methinks that she should have opened some through hull fittings and cut the pipes. There is enough debris floating around out there. I wonder whose responsibility it is now to salvage and dispose of the yacht.

Anyone who reads me knows that I am all for pushing the boundaries and taking chances, but I wonder if we are going too far. Jean-Jacques Savin, our french friend in the barrel might be looking for a more simple lifestyle, but mark my words; he is going to need to be rescued. That thing he is floating in is more like a cork than a barrel and he’s going to be tumbling like a tumbleweed as soon as the first serious storm heads his way. 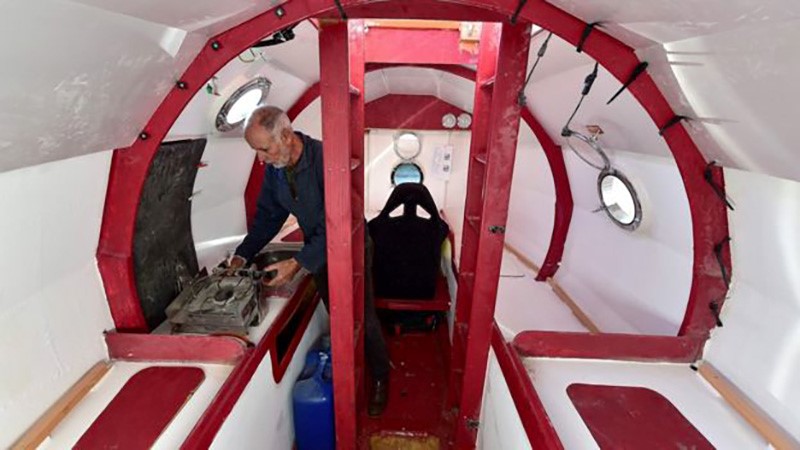