Clipper Race. Race to the Scoring Gate Hots up 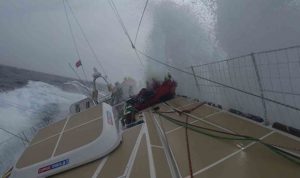 Whilst the Finish Line in Cape Town remains the ultimate goal for the Clipper Race fleet in the Stormhoek Race to the Cape of Storms, at least three teams currently have the Scoring Gate in their sights.

Dare To Lead has dipped south of the rhumb line, but remains in front of the rest of the fleet. Skipper Dale Smyth reports: “Another fast day down south here and it’s hard to believe we have covered just shy of 1000 nautical miles already in four days.

“The cold has really kicked in in the western side of this depression and the boat is raining inside with condensation. We are trying to stay in the southerly winds for as long as possible before they run out.”

Garmin has moved into second place, around 21nm behind Dare To Lead. However, Greenings in third position trails Garmin by less than 2nm, and Interim Skipper Andy Woodruff says: “It’s been another day power reaching under white sail with speeds between 11-20 knots, waves and spray coming over the deck, and sailing the day within sight of Garmin.”

It was a great day of racing on board Sanya Serenity Coast, though the team remains in seventh place, around 73nm off the pace. But Skipper Wendy Tuck hopes that position could change in the near future, explaining: “What a great day of blast reaching. Only trouble is, the rest of the fleet is doing the same and it’s very hard to catch up or do anything radical. There is the big high about to cause some chaos, so it will be interesting to see how that plays out.”

The high Wendy is referring to is moving faster than originally forecast. Clipper Race Meteorologist Simon Rowell reports: “The next 24-36 hours will be lighter and more changeable for most of the fleet as the high does pass over.

“Afterwards, the north to northwest winds should be really rather good, and bring more mostly fair weather for a day or so. The next low bustling down behind should catch up with the fleet on Tuesday night or Wednesday.”

HotelPlanner.com Skipper Conall Morrison is also keeping an eye on the approaching high, especially with less than 5nm separating the ninth placed team from GREAT Britain in eighth. Conall comments: “We have been reaching under white sails for most of today, the wind is backing, as forecasted, and we have been putting reefs in and out overnight.

“Hoping now that the weather is kind to us as we work out how best to deal with the new high pressure that is forecast to overtake the fleet.”

Nasdaq has moved into tenth place, whilst Unicef has fallen well back in eleventh, following a spinnaker wrap. Skipper Bob Beggs explains: “Saturday brought a change of wind and we put up the Code 2 (medium weight) spinnaker to take advantage of it. A sudden and rapid increase in wind caused the team to experience a serious wrap around the inner forestay.

“We hove-to while making the recovery, so for those watching us in the Race Viewer this may explain our speed and course gyrations.”

Work continues in Uruguay to return PSP Logistics to the sea, after the boat suffered rudder damage. Skipper Roy Taylor is thankful for the incredible hospitality from the Mayor and city of Punta del Este, but can’t wait to resume racing, saying: “Clearly we cannot get a podium this time. We are wounded, but most definitely not finished.

“We will sail as fast and efficiently as we can while we consider our tactics for Leg 3 and the Southern Ocean.”