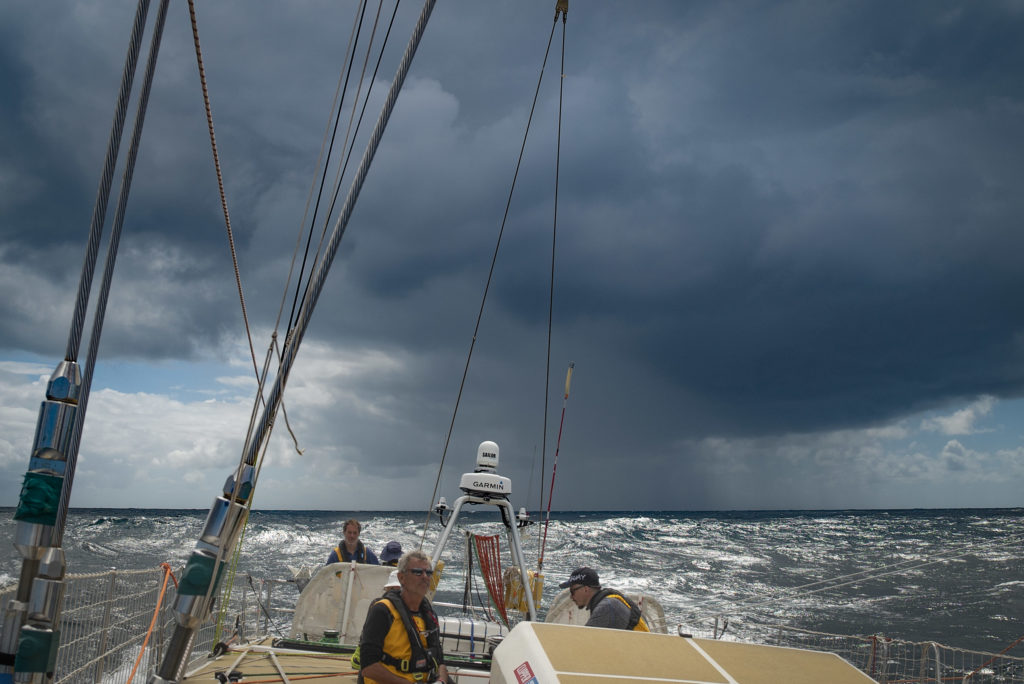 Squally conditions as taken from Zhuhai.

The early stages of Race 3, The Spinlock South Atlantic Showdown have been dominated by the decision of which route to take to Cape Town – the most direct, via the rhumb line with the risk of being affected by the St Helena High or the southerly route, longer distance but potentially more consistent conditions.

Many pundits expected the two South African skippers, Nick Leggatt and David Immelman to dominate and lead the fleet towards their home country as they have done this passage many times previously. Leggatt was on top of the leader board for the opening few days, but has now dropped back significantly, maybe due to making too much “easting” in the early stages. Time will tell though – and he should not be written off – not just yet anyway.

It was no different on the fourth day of racing as two distinct packs have formed. Closest to the rhumb line a group of seven teams, separated by less than 20 nautical miles, is being led by ‘Seattle’, ‘Unicef’ and ‘Punta del Este’ (at time of writing). Further south ‘WTC Logistics’, ‘Ha Long Bay, Viet Nam’, ‘Dare To Lead’ and ‘Qingdao’ have all committed to the southerly routing with a mere 5nm between them.

‘GoToBermuda’ Skipper David ‘Wavy’ Immelman reports: “From the sailing point of view, we are still hugging the rhumb line (shortest possible route) seeing our group pass either ahead or behind us from time to time.

“We have held our Code 2 spinnaker since about 0200 yesterday morning (apart from the one drop for a squall) and have been holding a very nice gybe angle. Looking at the forecast we are expecting our nice 15 – 20 knots of breeze to drop tomorrow, so we might as well enjoy it, or as they say, make hay while the sun shines. Following that we are expecting our first low pressure. Bring it on… loads of wind, rain and speed.”

The consistent wind and close racing means that results are seen in real time. As the teams in the northerly pack converge once again, Mike Surridge, ‘Imagine your Korea’ Skipper, said: “All through the afternoon we found more and more of the fleet, starting with Punta del Este and growing until we now have four others on AIS and in and out of visual range. After the isolation of Race 2, when we sailed alone down the Atlantic, this proximity is a welcome change. Mistakes show in real time – but so too does good work and good driving.” 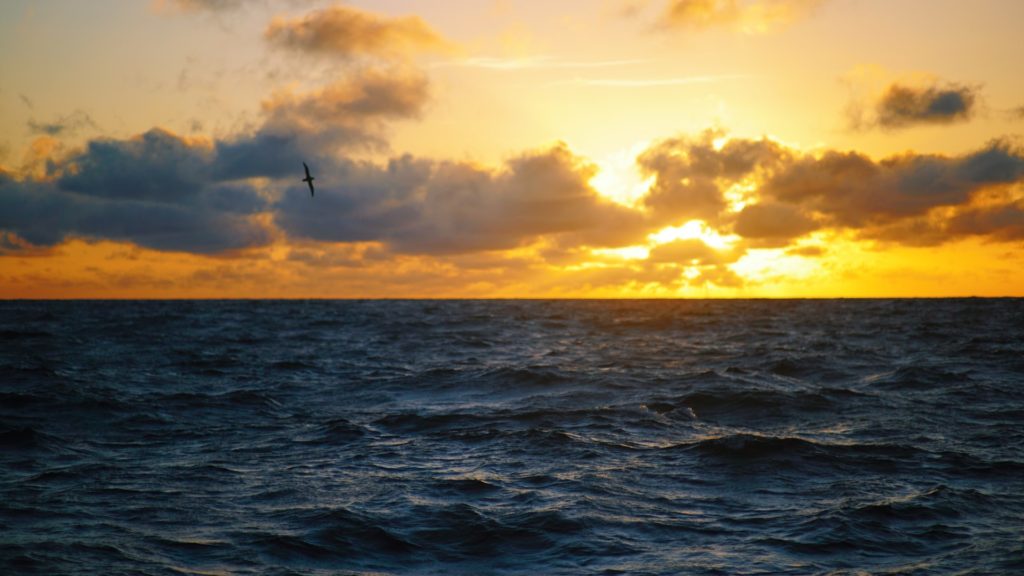 The fleet has so far been propelled on the ridge of a dissipating low pressure system with the next South Atlantic low due to arrive in the coming 24 – 36 hours. ‘Qingdao’ Skipper Chris Brooks reflects on the race so far: “At race start there was a big high pressure system in the middle of the course that would cause a shutdown and some tactical gains to those who played it well. There were also some areas of lighter pressure in the north forecast. Unfortunately, these have not come into fruition.

“This leaves us having travelled much further than the bulk of the fleet and skirting areas of lighter breeze to the south has been a further hindrance to our progress. The culmination of events leaves us far south looking for a way back to the rhumb line but all this time the breeze just won’t clock round (change direction clockwise) to allow us to gybe back. The next two days will be quite a telling story for the race and how it will play out. With increased winds from the north expected it once again will pay at the northern end or left hand side, as we look at it, of the fleet.”

The reality, with the latest report on proceedings now released, shows that the fleet is experiencing much lighter conditions – which may be the calm before the storm.

The leader board continues to fluctuate and sees ‘Visit Sanya, China’ top with ‘Imagine your Korea’, covering the most miles to be in second and ‘Punta del Este’ in third. Racing continues to be close with less than 40 nautical miles separating the top half of the fleet.

Seumas Kellock, ‘Visit Sanya, China’ Skipper, who completed the same ocean crossing two years prior reported: “This Southern Atlantic sailing really isn’t shaping up how I remember it, no grey skies, no water over the deck, no sopping wet foulies, but I’m sure it will come in due course. Until then, we will enjoy the sunshine and pleasant sailing conditions.

“Now we’re in close company with ‘Punta del Este’, ‘Imagine your Korea’ and ‘Seattle’ (hello everyone), each of us driving hard to get the first points on the board in Leg 2 from the scoring gate.”

The scoring gate is between SG3 North at position 37°S 030°W and SG3 South at position 38°30’S 030°W and is marked on the Race Viewer. It lies to the north of the rhumb line and its aim is to encourage teams off the fastest route to be rewarded with race points. The first three yachts to cross this gate will receive bonus points to add to their overall points tally. Around 200nm still to go, and looking at the current route of the fleet, it could be any of the top six teams to take home these points. 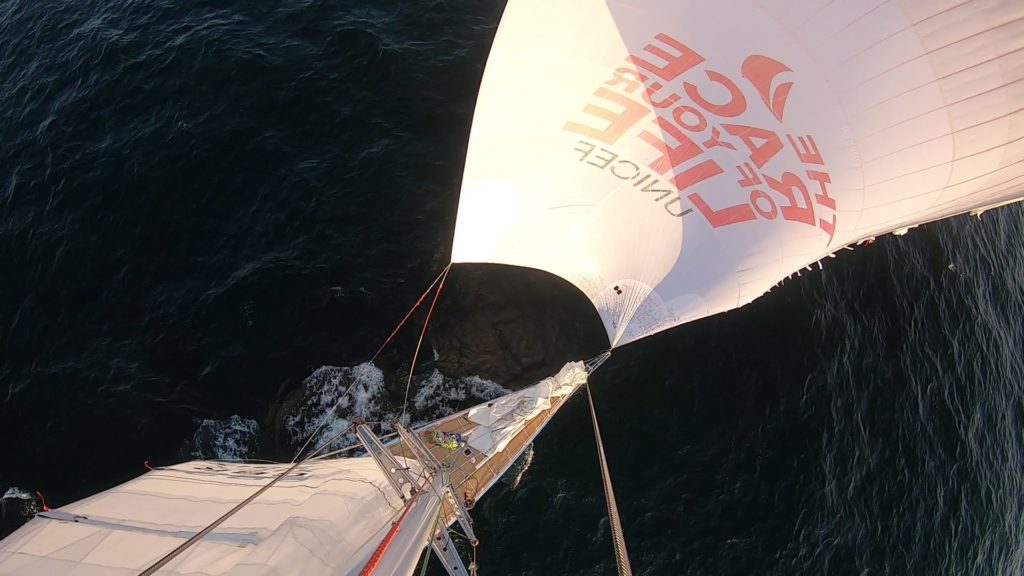 A view from the masthead during a rig check on board Unicef.

The pleasant conditions were felt across the fleet with ‘Imagine your Korea’ skipper, Mike Surridge saying: “Sailing our magnificent sailing machine today has been a joy. Flat seas, sun and a light wind have enabled us to move steadily along the route and it would appear a touch faster than some today.”

As the South Atlantic low pressure system develops, teams are preparing for its arrival, with added rig and equipment checks. Though there continues to be many distractions, Ian Wiggin, ‘Unicef’ Skipper, explains: “Final prep is underway for the blow, although we do keep getting interrupted by passing whales, for which everyone downs tools immediately, and huge albatrosses, which attract only the ardent twitchers or those that enjoy any excuse to sit down, stop heaving sails or washing up, and take in the extraordinary scenery we are sailing through.”

Nick Leggatt posted the following, entitled “The calm before the storm…”.

“Today has mostly been about light and variable conditions as a high pressure ridge passed over us ahead of an approaching frontal system. The team were kept quite busy with sail changes in the shifty winds: gybe, gybe, gybe, Code 2 down, Code 1 up, Code 2 down, Windseeker up, Yankee 1 up, Windseeker down, Staysail up.

Not so much wildlife around as usual as the soaring albatrosses, petrels and shearwaters prefer to roost on the water if there is not enough breeze for gliding, so they are a lot more difficult to detect.”

Tonight, we have the “big” watch on deck. The only one with six members. The watch is led by our Zhuhai ambassador, Li An, backed up by circumnavigators Dave Fortune, Kath Haig and Trevor Thurlow and supported by newcomers Stephen Novis and Tristram Alexander.”

Unlike the rest of the crew who keep hydrated using the Clipper 2019-20 Race water bottles, Tristram always wears a camelback water pouch which has led to Bernard Tommasini referring to him affectionately as the Mutant Ninja Turtle, due to his resemblance to the backpack carrying cartoon characters.”

And David Immelman posted this: “Well, not the best sailing day yet… Yes, the wind has dropped and the light between the two weather systems has pushed in. We are currently flying our windseeker positioning ourselves between the finish and ‘Zhuhai’, as the wind is supposed to fill in from Nick’s side of the course and bring him back to some close racing in the South African contingent”. 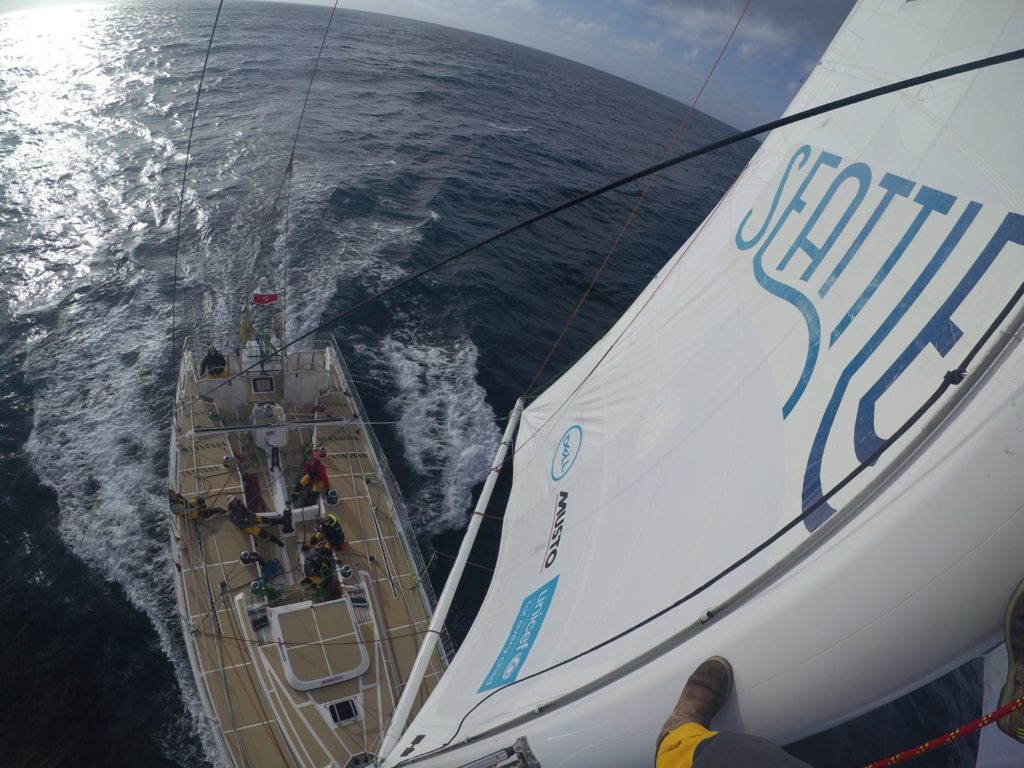 Talking of South African… Yeah… into the rugby final. Good luck guys, there are a number of us wishing you well from the middle of the Atlantic. There are some on GoToBermuda who are not, namely my English crew Chris Holleyoak (who for some reason has a problem on his forehead and keeps having this “L” sign appear each time he looks at me? Strange?)… Yes, the banter between us has started, and of course there is one not very happy Kiwi… Gerry Glover”.

We did hear that ‘Imagine your Korea’ is proudly flying the South African flag and have hence become our second favourite boat after ‘GoToBermuda’. Well done Mike and Sam!”

So, as we drift slowly watching the horizon in anticipation of signs of wind and worse ‘Zhuhai’, that same Gerry, is preparing the best smelling Cottage Pie for dinner, followed by a fruit crumble. Trouble with the saloon being the galley as well, is that we sit there chatting and salivating all at the same time. But who said life is not good at sea.”

Our bird life has started to take off as we head south with our first albatross sightings as well as petrels and ocean swifts. Beautiful graceful birds in flight, hardly flapping their wings, just riding the wind and waves as they glide over the ocean, sometimes looking like they will touch the wave tops and just missing. Amazing to watch and probably more mesmerizing than an open fire.”