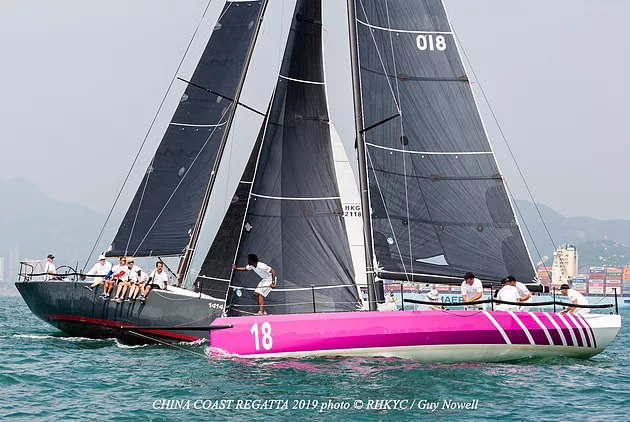 Although the forecast looked grim, the wind was better than expected across the race track for Day 1 of the China Coast Regatta. Race Officer Inge Strompf-Jepsen managed to find a patch of westerly breeze averaging 6 knots southeast of Hong Kong’s Lamma Island. 25 boats from all IRC Racer divisions were sent on windward/leeward courses and two yachts from IRC premier Cruising division were set an islands course around Waglan and Sung Kong.

A sudden southerly shift kicked in after IRC Racer O started their second race, forcing the Race Officer to abandon Race 2 for IRC Racer 0 after which all IRC Racer divisions enjoyed a lunch break whilst waiting for the race management team to relocate the marks. All IRC racer divisions were subsequently set another windward/leeward course for Race 2 in a south-westerly breeze.

Given Sunday’s forecast for lighter wind, race management decided to add another windward/leeward race for Day 1. In all, each IRC Racer division finished three windward/leeward sausage courses with happy smiles under hazy sky and an average of 6 to 8kts of breeze.

The RSA crew aboard the C31 ‘Orion DYP’ should be satisfied with their performance so far as they opened the regatta with a 4th, and then finished with a pair of 3rds. Not a bad showing for their size and handicap.

Results after 2 race showed the ‘Orion’ guys to have won race 2 and be 2nd overall, but that was changed when the final results for the day were posted.

Racing in IRC Racer 1 division, the Ker 42 Custom ‘Seawolf’ took two firsts in the first and third races, four points ahead ‘Ambush’, with Ellian Perch’s Cape 31, ‘Orion DYP’, which made the journey to Hong Kong from South Africa, overall in third place.