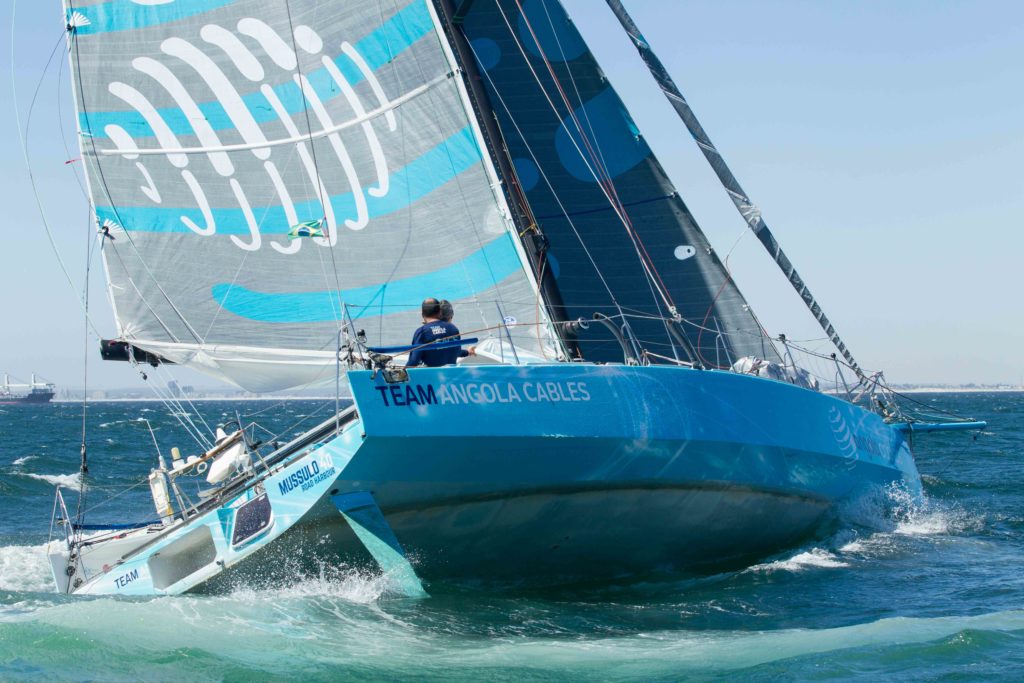 An Angolan skipper and Brazilian team mate will compete for class honours aboard Mussulo 40, renamed Team Angola Cables for the race.

The double handed pairing of Team Angola Cables will be strong contenders for line-honours as they take on a competitive fleet to challenge the trans-Atlantic dash in the upcoming Cape2Rio 2020 yacht race which gets underway in early January in Table Bay, Cape Town.

Team Angola Cables will be participating in the Class40 category under veteran Angolan skipper, José Guilherme Mendes Pereira Caldas with his Brazilian co-crew member, Leonardo Chicourel. Their yacht, Mussulo 40 has successfully competed in many races around the world and it is the second time it will be competing for class honours in the Cape to Rio event.

Angola Cables’ sponsorship of the 2020 entry is significant given that the SACS, a subsea cable network connecting Africa to Brazil, was the first Trans-Atlantic fibre optic cable to go into operation. Says company CEO, António Nunes, “Not only does an event like the historic Cape2Rio race bring different nations together from across the world and across the oceans, SACS is connecting millions of people to the global digital economy – and as a company, we are very proud to play a part in uniting nations across the southern hemisphere – both above and below the waters of the South Atlantic ocean.”

The Cape to Rio yacht race is South Africa’s premier ocean sailing event and the only transatlantic race to take place in the southern hemisphere, with 24 entries participating in the 3 600nm (6 700 km), non-stop race. Over the years, the race has attracted some of the greatest names in ocean racing, including the likes of Sir Robin-Knox Johnson, Bertie Reed, John Martin, Eric Tabarly and Giovanni Soldini.

The first Cape to Rio race was held back in 1971 and comprised a field of 59 entries.

About Angola Cables
Angola Cables is a multinational company operating in the ICT industry with tailored connectivity solutions for the wholesale and corporate segments. With a robust transport infrastructure and a highly interconnected IP network, Angola Cables offers customers greater access to the largest IXP’s; Tier 1 operators and global content providers.

Through SACS, Monet and WACS submarine cable systems the company directly connects the Americas, Africa and Europe and has established partnerships to reach Asia. We manage the Tier III Data Center AngoNAP Fortaleza (Brazil) and Data Center AngoNAP Luanda (Angola) as well as the PIX and Angonix; one of the largest Internet Exchange Points (IXP’s) in Africa.