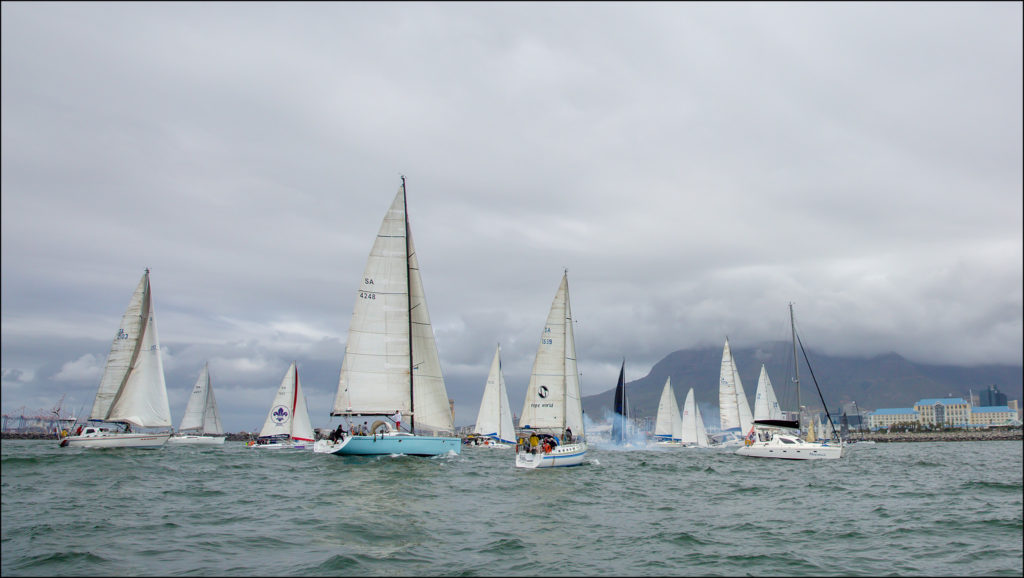 The competing yachts on the start line as the gun signal goes off, whose smoke can still be seen.
Pic by Kim van Zyl

Suboptimal conditions, with little wind and bumpy seas, favoured the racier of the cruising yachts at race start. A light Westerly wind of around 8 knots was sufficient to just keep the boats moving.

And true to form, the more relaxed cruisers, as opposed to the serious racing type, were mainly ‘chilled’ – no anxiety was picked up from the sailors who will be spending the next ten days or so on the water. One crew was reported to even have requested an explanation of the starting sequence via radio, just minutes before the start! 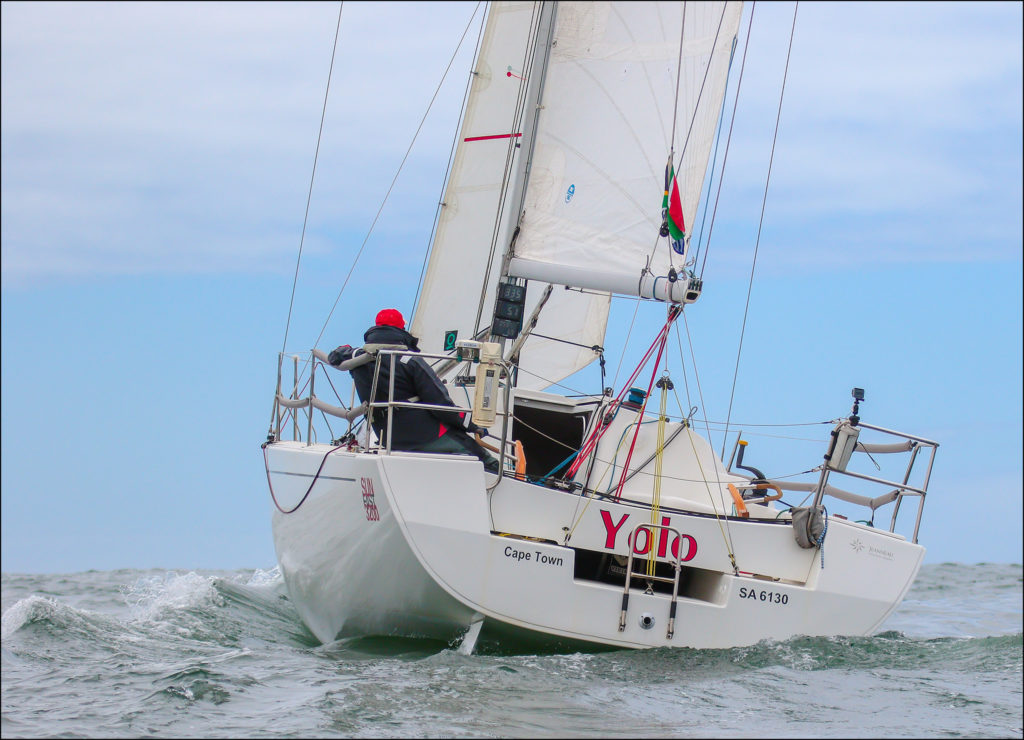 The one single-handed entry, Dale Kushner aboard ‘Yolo’, made good use of the sailing rules by forcing the fast trimaran ‘Banjo’ away from the start, resulting in not quite so amicable shouting from Banjo’s crew, but other than that, the start proceeded smoothly.

The lumpy swell caused the heavier monohulls and catamarans to struggle with speed. The faster cruisers could be seen coping better with the bumpy conditions, with the light 31′ trimaran ‘Banjo’ and the racer cruisers ‘Rocket’, ‘Naledi’ and ‘Yolo’ taking off very well. 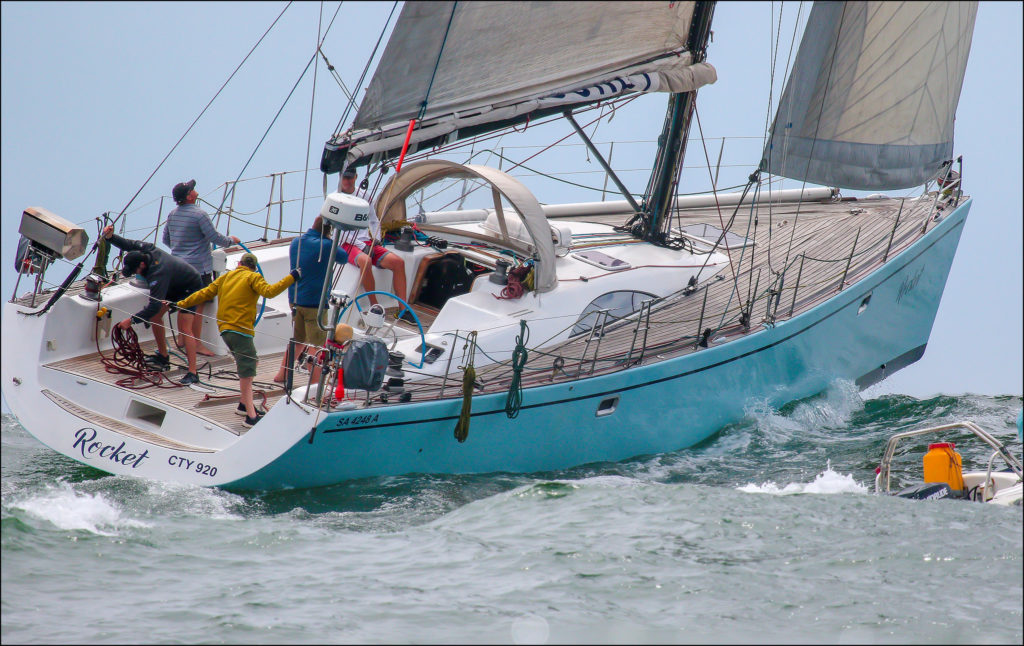 Rocket – the majestic 55′ yacht is the largest boat of the Cape to St Helena fleet.
Pic by Kim van Zyl

Whereas some boats chose to head north-west inside Robben Island, others took a more Westerly route, and a few could even be seen heading South-West, hoping for better wind.

Heading up the Cape West Coast, conditions are expected to remain bumpy with a light Westerly breeze for the rest of Wednesday. With the wind predicted to build and move South over the next days, the fleet should be cruising more comfortably. 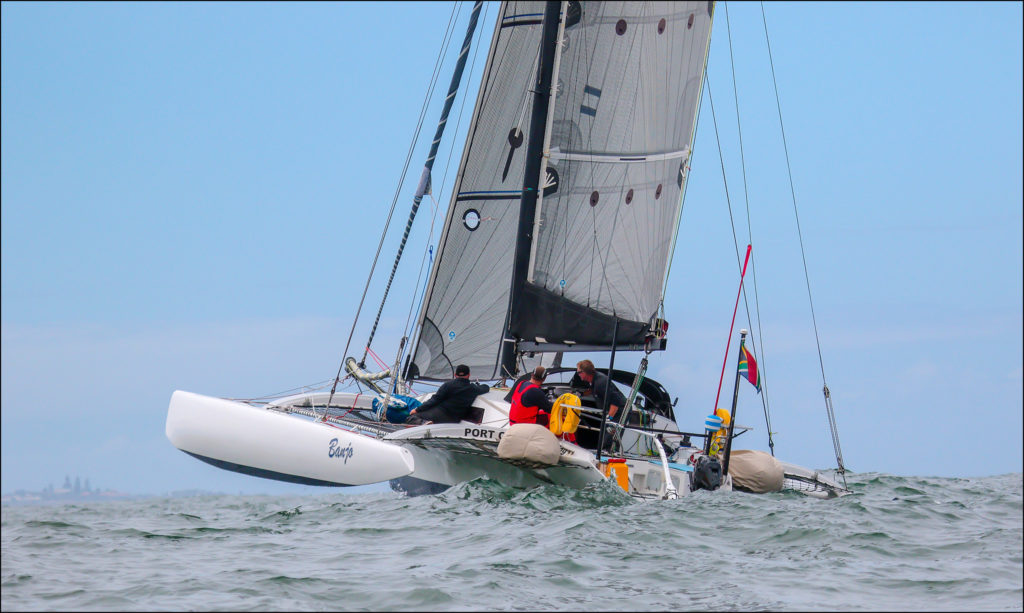