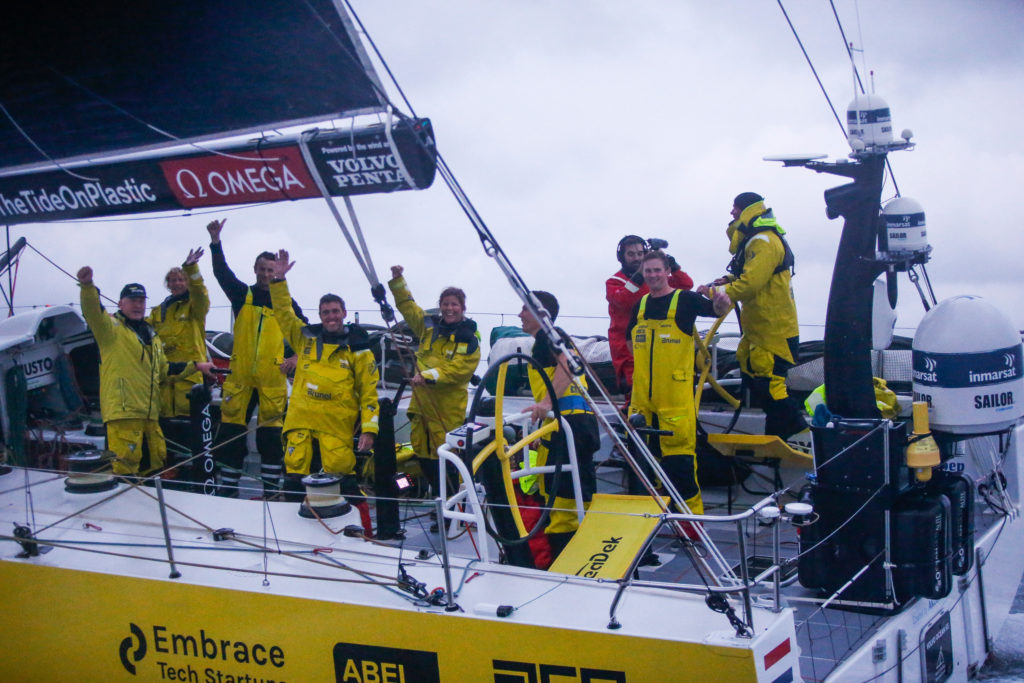 Brunel has completed one of the great comebacks in sailing, setting up an epic final leg to The Hague next week in what will be the closest Volvo Ocean Race in history.

Three teams – MAPFRE, Team Brunel and Dongfeng Race Team – will start the final leg in a dead heat at the top of the table, with the overall title on the line. It’s an unprecedented scenario in the 45-year history of the race.

On a rainy, blustery Thursday evening in Gothenburg, skipper Bouwe Bekking led his Team Brunel to a come-from-behind win in Leg 10 over Xabi Fernández’s MAPFRE squad, who claimed second place, less than two-minutes behind after nearly 1,500 nautical miles of bow to bow racing.

“We did a fantastic job as a team and of course the result was better than we could have dreamed,” Bekking said. “We wanted to beat the two red boats but a win to get the bonus point is really nice…

“The pressure was on but we knew we just needed to sail the boat the best we could and not do any crazy things. Very happy how it all ended up.” 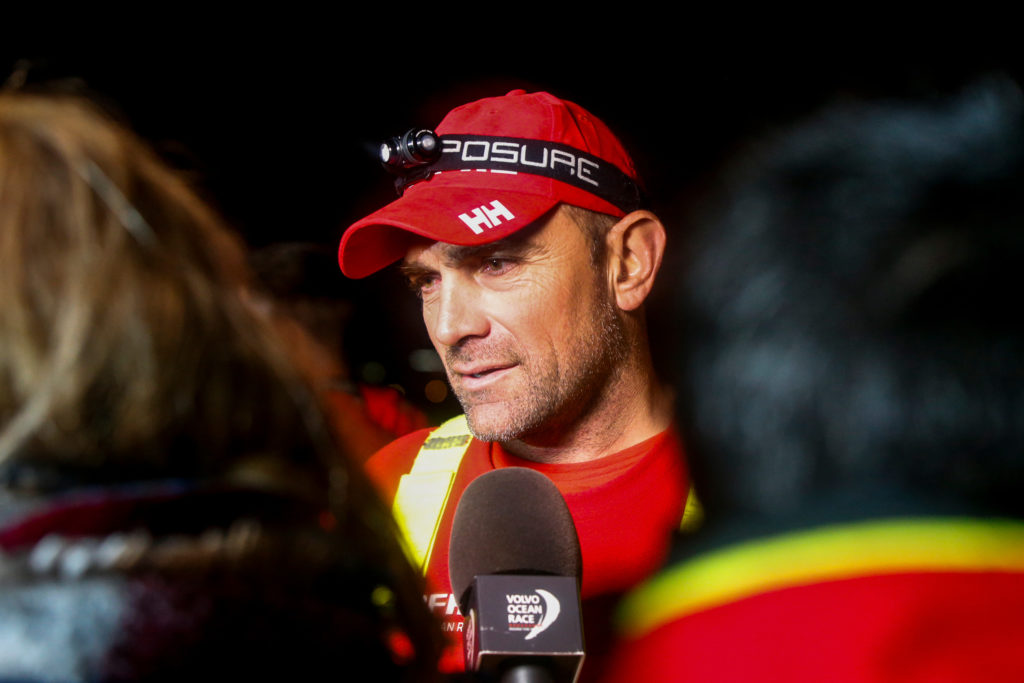 Bekking has led his team on an incredible comeback pace, following a dismal opening half to the race. At the conclusion of Leg 6 into Auckland, the team was mired in sixth place, on just 20 points. In comparison, MAPFRE, the race leader at the time, had already won 39 points.

But since then, Team Brunel has been on fire, posting a 1-2-1-1 score line over the past four legs, to bully its way to equal first at the top of the Leader board, after collecting 45 out of a possible 47 points, an incredible scoring ratio.

The Leg 10 results mean MAPFRE and Team Brunel sit equal at the top of the Leader board with 65 points. MAPFRE will be ranked in first place by virtue of leading the In-Port Race Series, which is the tie-break mechanism for the Volvo Ocean Race.

Charles Caudrelier’s Dongfeng Race Team, who was the leader at the beginning of Leg 10, had a fourth place finish into Gothenburg, putting Dongfeng on 64 points (although the team is in pole position to earn an additional bonus point for best elapsed time which will be added after the Leg 11 finish).

This means the top three boats in the Volvo Ocean Race will start the final sprint into The Hague on June 21 in a dead heat, with the overall title on the line.

“For the fans it’s going to be an exciting last leg,” said Caudrelier after the finish. “And for us as well. We will give all we have and try for our first leg victory. But really we just have to be ahead of the other two. We can do it!”

“It was a very good leg for us and a good result as well, but a little bit painful the way it happened,” Fernández said. “We felt we did the hardest part of the leg, up the coast of Scotland, and managed to be in the lead there, but we just couldn’t hold Brunel on the tight reaching… They’ve been improving a lot on the last legs, but it was a surprise to see such a speed difference.” 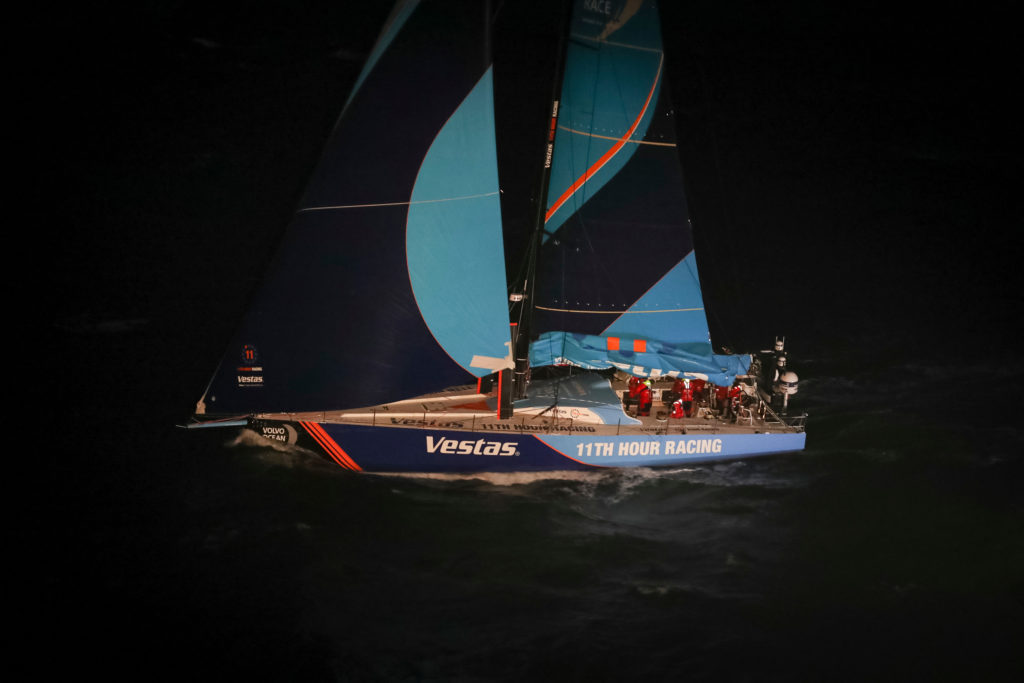 “I don’t think you can get any better racing than this in the sport of sailing,” he said. “It was intense racing in the most competitive fleet you can find in the world. Pretty stoked to have a podium. We pushed to be first but MAPFRE and Brunel did an unbelievable job and we had to let them go.”

Turn the Tide on Plastic had a strong leg, battling with the leading group from start to finish. In the end, Dee Caffari’s squad would take a fifth place finish, moving them to within one point of over-hauling Scallywag.

“We’ve been racing in sight of five boats for the entire leg,” Caffari said at the pontoon after finishing. “To have the racing that close right up until the finish is immense…

“We were ahead of AkzoNobel and Dongfeng at times but they put the afterburners on at the end and we couldn’t quite hold them. But we were really competitive and I’m very proud of my team.”

It was an uneventful, if disappointing leg for Charlie Enright’s Vestas 11th Hour Racing squad, who posted a sixth place finish.

“It was a tough leg and not our best performance by any means, but we have one more leg to end it on a high note,” Enright said. “We were pushing right until the end. It was our worst result with a sixth place, but the deltas were really close. We were battling with Brunel who ended up winning the leg and we were pushing hard until it was a foregone conclusion.”

David Witt’s Sun Hung Kai/Scallywag finished in seventh place, after falling behind the fleet on the first evening and never fully recovering into a competitive position.

“We made it pretty hard for ourselves being anchored in Cardiff while we watched the rest of the fleet sail away from us for 100 miles,” Witt said.

“But I’m really proud of the team and I know the boss is too. I’ve been involved in team sports all my life and I’ve never seen a group of people who keep rising and work harder when it starts to get hard. We’ve had our ups and downs but we’re going to do our best in the last leg.”

But all eyes will be on the top three boats for the start of the final leg as they battle for their positions on the podium for this edition of the Volvo Ocean Race. The results have never been closer and the pressure has never been higher.

“We need intensity, focus and to sail the best we can… that’s all we can do,” said Team Brunel navigator Andrew Cape when asked to describe how he will approach the final leg.