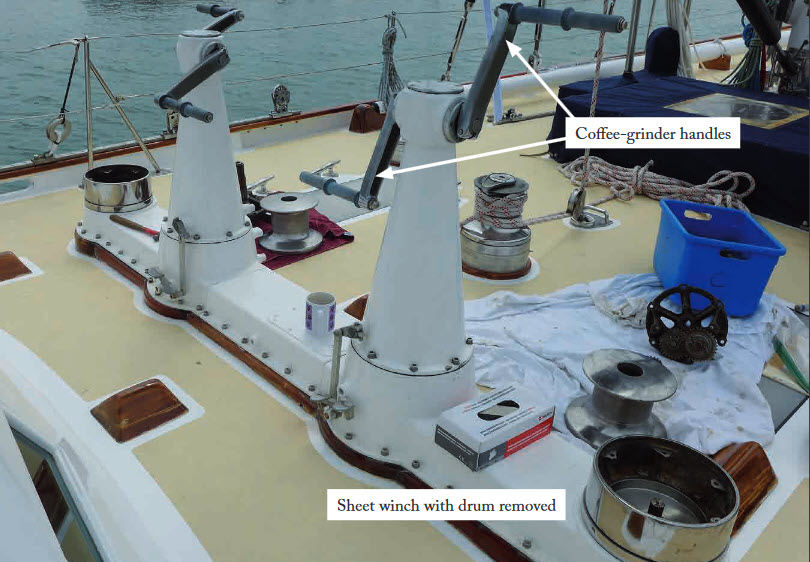 A privately-owned, 52-year-old maxi-yacht was at sea and the crew was training for a forthcoming race; conditions were ideal, in sheltered waters: a steady breeze, calm seas and good visibility.

On its coach-roof, the yacht was fitted with two pedestal-style winches (Figure 1), known as coffee-grinders. The winches were operated by two crewmen working together to turn the pedestal handles, which mechanically rotated the winch used to control the headsail.

The winches had four speeds available that delivered increasing leverage using internal gears. There was also a mechanical ratchet inside the winch drum, which meant that it could only turn in one direction.

During the sail training, two of the crew were working together turning the starboard coffee-grinder to heave in the headsail when there was a sudden change of the handles’ direction. The ferocity and instantaneous nature of the winch’s failure resulted in both the crewmen suffering broken wrists.

Post-accident examination of the gearing system inside the starboard winch drum identified that a load-bearing pinion on the central spindle had catastrophically failed. This had resulted in the tension in the winch drum being instantly released back up through the pedestal to the handles, causing their violent, hazardous reversal of direction.

The failed pinion was formed of two parts, whereas the same component on the port side winch was a single part (Figure 2). The coffee-grinders were assessed to be original to the vessel and there was no paperwork to support or explain their installation, maintenance or any repairs. 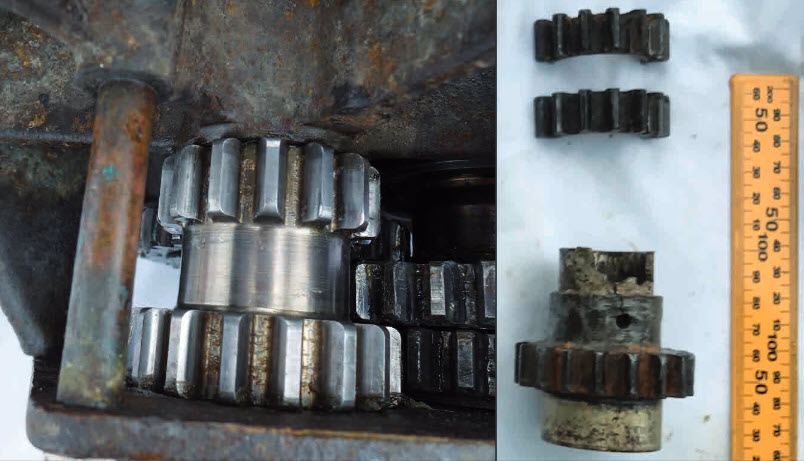 The Lessons
1. Deck winches on yachts are exposed to very high tension forces and need to be maintained, operated and repaired safely.

2. It is evident from examination of the failed component (Figure 2) that it was either a replacement part or, more likely, had been subject to a repair. This is because the same component on the other winch was a single, machined part. As a load-bearing pinion, it would also not make engineering sense to be constructed in two parts. Therefore, this was either a sub-standard repair or a replacement part and the details could not be traced, probably due to the yacht’s age and the fact that ownership had recently changed hands.

3. Should any part of a load-bearing, high tension system such as this winch require a repair or a replacement part, it is vital that the new component meets the manufacturer’s design specification. If necessary, original drawings should be checked or specialists in the area consulted in order to minimize the risk of subsequent failure, equipment damage or crew injury, especially for old or bespoke systems.

4. Routine maintenance of yacht winches should include a detailed visual inspection of all the component parts. The coffee-grinders on this yacht were elderly and possibly a unique design. Therefore, it was particularly important to check for wear, especially cracks that could indicate fatigue.