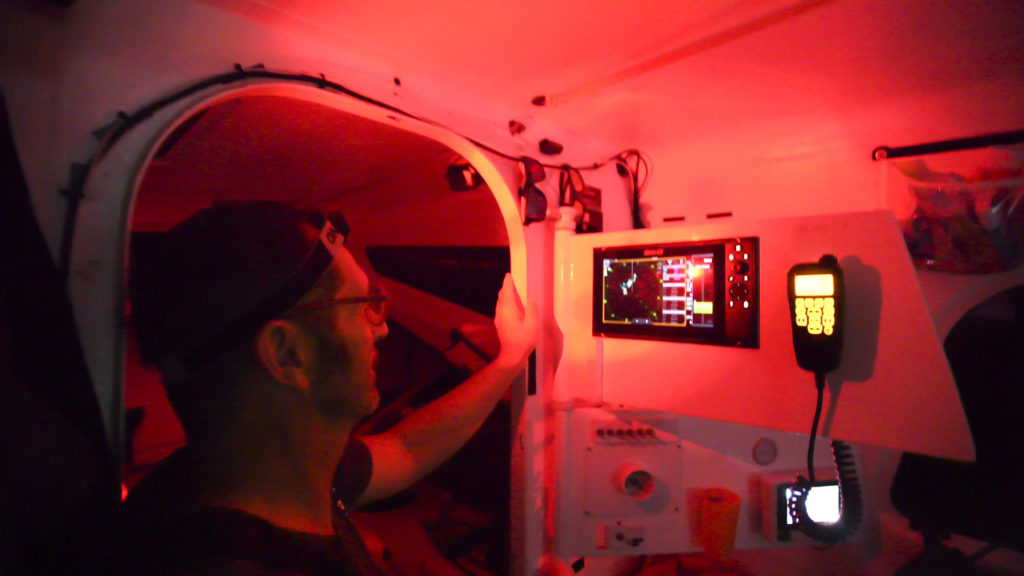 A lot of time is spent in the nav station analysing weather and route info. This is aboard Actual Leader.
pic by Ronan Gladu / Actual Leader

Heading for An Upwind Crossing From Rio to Cape Town.

‘Edmond de Rothschild’ has arrived in Salvador de Bahia where Gitana’s technical team has been working to repair its daggerboard, handing the lead to ‘MACIF’, although she too has to make a technical pitstop in Rio de Janeiro to replace its central hull rudder. This should then again hand the lead to ‘Sodebo Ultim 3′.

First question Seb, let’s look at the start of “Brest Atlantiques” and the descent into the Bay of Biscay, how did it go for the four trimarans?
As expected, they all sailed safely, leaving with one or two reefs in the main and no headsail; they didn’t have much choice. They knew that there were six tricky hours to come – and in tough conditions to boot. The difference with the Route du Rhum last year is that it was more open, so less demanding for the boats. However, they still set off at a fast pace, at an average speed of 28 knots. They remained bunched initially, but after four or five hours, ‘MACIF’ unfurled its headsail and immediately gained 4-5 knots of boat speed. The Maxi ‘Edmond de Rothschild’ was fast to follow, being the competitors they all are.

Then there were different routes to choose, why do you think that was?
Yes, well Maxi ‘Edmond de Rothschild’ and ‘Actual Leader’ chose to sail inside the TSS (traffic separation scheme), which wasn’t necessarily the best choice. The route taken by ‘MACIF’ – to the west – was actually more favourable. I think that choosing this inside course was partly due to the sea’s state; it was a slightly safer choice.

After that, there was a gybing battle….
Yes, and in winds that were actually a lot more erratic than what was forecast. The Maxi ‘Edmond de Rothschild’ gybed first, and then made two further gybes. I think they tried to escape from a squall which they got caught up in. Here again, they were heading in a more westerly direction, but the Maxi ‘Edmond de Rothschild’ crossed in front, as the fastest boat in the fleet. They’re always able to keep a little extra in the tank: always a little faster, and a little lower. We saw this happen on the Route du Rhum and in training this year. Which is to be expected, because even though ‘MACIF’ has had a refit to be more efficient, ‘Gitana 17′ is a newer and bigger boat. The ‘MACIF’ trimaran is 2 metres shorter (30 metres compared to 32).

What about crossing the Doldrums?
I think they all took into account what happened on the Transat Jacques Vabre. Maxi ‘Edmond de Rothschild’ did well. I think that when going at slower speeds, the damage to ‘MACIF’s’ rudder has been a disadvantage, as it will have become more difficult to manoeuvre the boat. They may even have lost control at times and perhaps made some 360 turns. At high speeds however, above 25 knots, it’s actually an advantage to not have a central rudder, because it means there’s less drag. 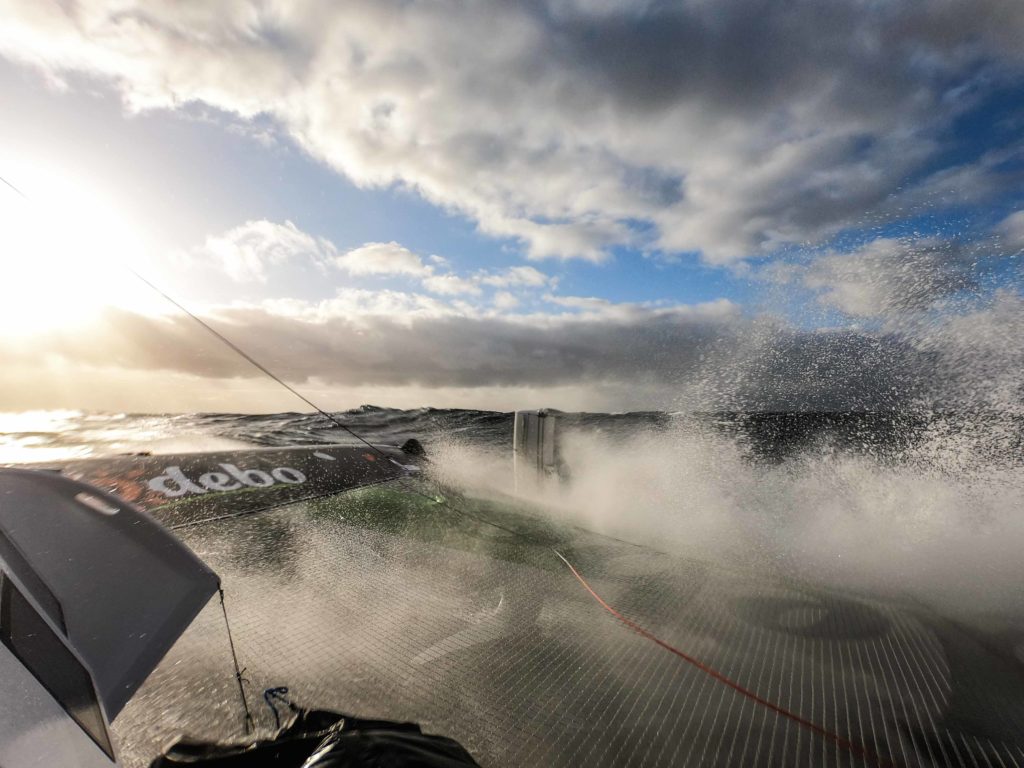 Sobedo Ultim 3 is likely to take the lead today after two competitors have pit-stopped.
pic by Martin Kerurozé / Sodebo Ultim 3

Do you think that Maxi ‘Edmond de Rothschild’ suffered as a result of the damage to their daggerboard?
Yes, I think that between the Doldrums and Bahia, they should have been going at an average speed of 35 knots or even higher. In reality, they rarely went above 30 knots.

Will these two technical stopovers create enough distance to favour ‘Sodebo Ultim 3′ and ‘Actual’?
It obviously depends on how long the stopovers take; but yes, of course. As these boats are sailing at over 25 knots at any given time, which means that a pitstop allows those behind to catch up quickly. So, ‘Sodebo’ will be able to take the lead if they don’t end up having to make any stops. We know that this race will be full of surprises, and these pit stops are just a part of it.

How do you rate the track record of ‘Sodebo Ultim 3′ and ‘Actual Leader’ so far?
We have always known that ‘Actual Leader’ is a slower boat than the others, and this came to play a part at the start of the race, where she sailed further downwind compared to the others. Looking ahead to the rest of the course in the South Atlantic, it’s going to be a different story. If they make no stops – and everyone else does – they could win. As for ‘Sodebo Ultim 3′, we can see that it’s going a little slower than the Maxi ‘Edmond de Rothschild’ and Trimaran ‘MACIF’ at certain speeds. I remember hearing Thomas say two years ago that he’d designed this boat for the solo round-the-world attempt originally planned for the end of this year, and because of that, he preferred to have above all a reliable boat. For the time being, it’s proved to be a good decision, since he looks like he’s going to take the lead.

Let’s talk about the rest of the program: what’s the route to Cape Town in the South Atlantic looking like?
Complicated! For the moment, this route will see the boats having to contend with the St. Helena High. The best option will be to pass to the north of the high with upwind conditions for a while. For now, it looks like there’s going to be some upwind sailing between Rio and Cape Town.

And upwind sailing is not very pleasant…
Not necessarily. Today, when these boats are in flight mode, you can sail upwind at 28-30 knots offshore. They’re fitted with shock absorbers, so in terms of comfort, it’s actually not that unpleasant; the boats sail pretty flat. It will be less comfortable for ‘Actual Leader’, who doesn’t fly like the others. Otherwise, the disadvantage of upwind sailing is that it puts a little more strain on the boats.