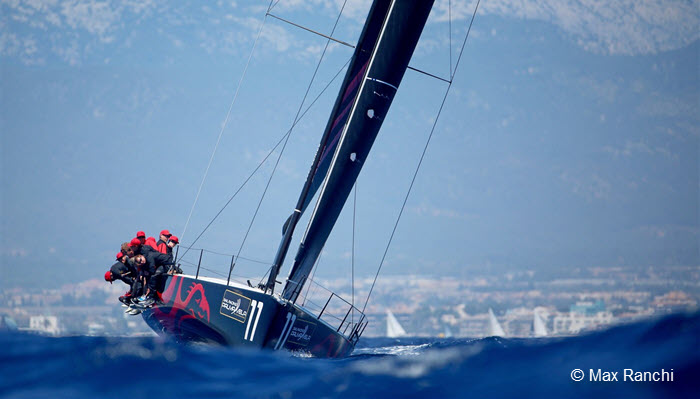 Professional sailor and coach Andrew Palfrey has been working with Hasso and Tina Plattner’s two-boat TP52 program, helping them ramp up for the 52 SUPER SERIES in 2019. In this report, he shares the process for coaching the two Phoenix teams.

So far we have done two training events with both boats. The first was in Valencia in early April, together with seven other TP52 teams. The second was a two-boat training camp in Palma in the days leading up to PalmaVela. It has been an enlightening and enjoyable experience.

With two teams, 26 sailors, a shore crew, support staff, chaseboat drivers, not to mention the coach (me) and our drone guy, it is a big operation. Lots of hours, as the data and media assets created from an outing on the water is immense. A standard day would see my alarm set for around 0500 and the stumps drawn at about 2200 that night.

Coach’s Role
My role is to support the sailors, to ensure they are well armed with all of the information they need to make good decisions all the way through the team and all around the race track, regardless of their role on-board. It is also to foster the culture that Phoenix have created, which sees a positive learning environment.

As mentioned, there is a sea of data that is created each time the boats sail. On top of that is the one thousand or so technical photos I take. Plus drone footage from the speed testing, starts and mark-roundings. In addition to this are the onboard cameras that run all day. We also place voice recorders on each of the tacticians.

After conferring with both teams, and with the assistance of both navigators and an offsite data analysis guru, I set to work on the key things we identify as wanting to look at and discuss at the debrief, which would either be just prior to an evening meal, or (ideally) the next morning.

With 13 sailors on-board each boat, the debriefs are a large gathering. One of the challenges in such a large group is to create and foster an environment where everyone feels empowered to speak up and give their opinion. The best debriefs are generally where the video needs to be paused due to the discussions.

I remember (long ago) when I was young, reading something that US sailing legend (now a good mate), Dave Perry wrote in my favourite sailing book of all time, “Winning in One-designs”. He said something to effect that the coach or instructor usually learns more than those being coached. Those words always come back to me when I am coaching. And I have learnt a bus-load this year with Phoenix.

Data Analysis
One area of personal development for me has been the introduction to a new software application for debriefing called Njord Player. All the data from the day, as well as all the media is loaded quickly and easily to Njord Player.

In around 30 minutes, we are ready to present a very high level debrief, where we have the data over-laying drone footage. We have the tracks of the fleet. We can bring up additional windows for the onboard footage, or still-photos and we also have the audio from the boat.

It is not the first time this has been done, but it is by far the simplest and quickest application we’ve ever seen. It takes the learning to a new level.

Another platform, developed by the same SailNjord company is Njord Analytics. Reports are created within minutes of us hitting the shore. These include overall data reports, individual race reports detailing selected variables, and performance results against those variables, wind studies and calibration reports.

We also receive “line-up” reports that detail the relative performance and settings for our two boats for every relevant speed-test they had that day, be it in the tune-up period or the racing.

As coach, I have an app on my phone where I push a button for the start and finish of a line-up period. Before I get back to the meeting room, a report is waiting for me on the analysis of each of those line-ups. Very impressive. The output is the sailors being more informed and it also generates discussion at a much higher level, thus building the racing instincts.

In the Phoenix team, we have direct access to SailNjord’s creator, Jonas Witt. Jonas is generally the smartest guy in the room wherever he goes. His ability to quickly solve problems and then create innovative solutions continues to astound me. It has been a fun environment.

The Coming Days…
The first event is the Menorca 52 SUPER SERIES Sailing Week on May 21-25, and what we learned in both Valencia and Palma showed how tight it will be. Performance differences are virtually non-existent. No doubting the final results will come down to starting execution, wind strategy, and changing gears and modes more effectively than the team close by.

Every team is using new sails, designed specifically for the 2019 season and to suit the intricacies of each boat and mast. There is one new boat. Most boats will have some changes to keel and rudder from 2018. So a few unknowns until all the good gear emerges.

The weather is looking fairly light and unsettled for the coming days, as is typical for the Med this early in the year.

Most teams will be happy to depart Menorca having been in the mix at the front and middle of the fleet and coming away with having improved through the week. It’d be a wonderful result for us to see both Phoenix teams in the top half and at least one of them on the podium. This is a lofty aim, as the 52 Super Series is the most competitive yacht racing in the world.