And Now for Something Completely Different! 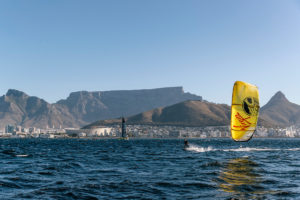 Professional Danish kiter Nick Jacobsen set, together with Team Brunel, the world record for highest Kite Tow Up at 277 metres above sea level. The successful record attempt was done in the Table Bay, Cape Town. 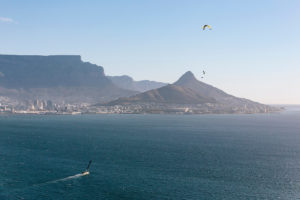 High above Cape Town a world record was broken.

Jacobsen, with the help of Team Brunel and their VO65, set the new record by beating the old record of 244 metres, set by Jesse Richman. The old record, done behind a speedboat instead of a sailing yacht has stood for over four years. 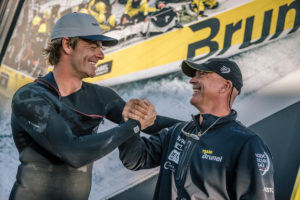 The attempt was engineered to perfection. More than 500 metres of line was dragged behind the boat, where Jacobsen connected himself too. The speed of Team Brunel took care of the actual lift. Team Brunel member Kyle Langford, who is a fanatic kite surfer himself, was in control releasing the 800m line on the winch that connected Jacobsen to the boat. After reaching the maximum length, Nick safely paraglided down to the water in 66 seconds.

The 30-year-old Dane, Nick Jacobsen is no stranger to doing extraordinary things with a kite. In April this year he jumped off the third tallest building in the world, the Burj al-Arab, with a kite. He also won many big freestyle kiting events all over the world.