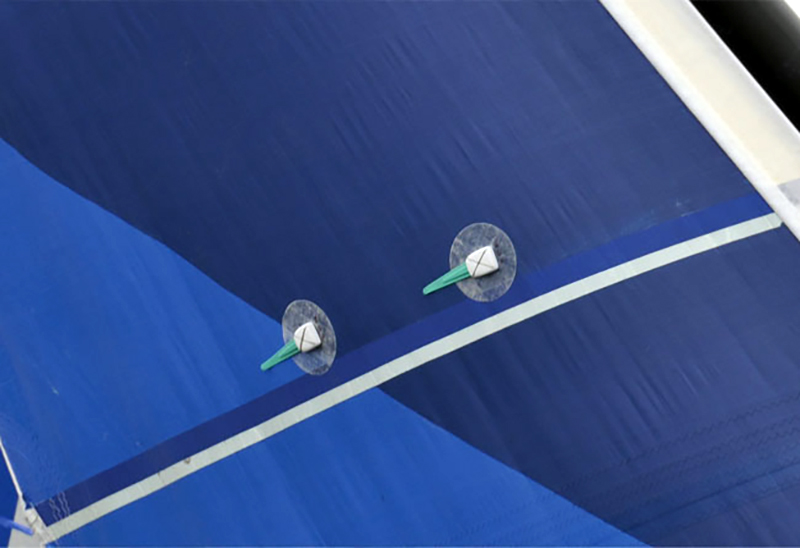 Michel Desjoyeaux is one of the most successful solo offshore sailors in the world. He not only won the Vendee Globe twice, he also won the Route du Rhum as well as numerous other offshore races. Now semi-retired from offshore racing he has a company in France called Mer Agitée. Desjoyeaux and his partner Régine Bornens created Mer Agitée in 1999 to bring innovation to the sailing world. Their latest product, an electronic telltale is pure genius. Working with the engineer Dimitri Voisin, Mer Agitée devised an elegant digital solution called TrimControl and yes these are digital telltales. But how is this possible?

Voisin and his colleagues have found a clever way to enclose a highly accurate motion-sensing device within a slim, tapered piece of silicone rubber that is attached to a rectangular base unit which is glued in place to the membrane of the sail. This sensing unit is only a few cubic centimetres and has the electronics needed to transform the telltale’s motion at a rate of one hertz (one reading per second) to digital signals that are received via a local network by a base unit, which is usually located in the boat’s nav station.

The base station in turn connects to an android smartphone where the TrimControl App gives electronic telltale values in real time and Adrena navigation software records the data and statistically analyses it so that significant variations are noted and given values to display. When the angles of the electronic telltale vary widely beyond an established mean, the flow is interpreted to be turbulent due to the sail being under-trimmed (or the apparent wind angle of the helm is too narrow for the trim). These values are put on display for the skipper/navigator to see.

Conversely, a stall condition is shown as when the telltale is making a high angle to the membrane surface and remaining constant with little flow. In either case, Voisin says at least 10 knots of apparent wind speed is needed to get best results from this installation. Product testing and development has been on a variety from boats, from Pogos to IMOCA 60s with a pilot project having been done in the last Giraglia Race.

“I also see this being a tremendous value in the Volvo or America’s Cup,” says Voisin, “where sensors are on everything related to the rig and sail plan, and now there is a device that logs some critical data related to airflow around the sail plan.”

There is also some development work being done with instrument company NKE to link autopilot systems to not only the apparent wind angle being measured and recorded from the masthead instruments, but the real-time angle of the sails themselves to the wind.

One problem that they had to overcome was the fact that you could not see the telltales at night and even in daylight some boats are so big and their rigs so high that the small yarns or ribbons are just not visible from the deck or cockpit. Mer Agitée’s solution is the e-telltale which sends data to the boat’s nav systems and displays them via an app on your smartphone. See I said it was pure genius.