“After Mahón we reset to zero and start here with a clean sheet,” smiled Phoenix’s Italian strategist Michele Ivaldi just before the South-African-flagged team went out and won today’s Official Practice Race for the Puerto Sherry 52 Royal Cup, the final warm up before Tuesday’s first points race as the circuit visits the new Andalucian venue for the first time.

In just the kind of solid sea breeze that this corner of the Bay of Cádiz is renowned for, Tina Plattner and the Phoenix team kept the 2019 circuit leaders Platoon, winners last month in Mahón, Menorca behind them to the finish first across the line, buoying the confidence of the team that finished seventh at the first regatta of the season.

As the circuit comes to Puerto Sherry for the first time, local organisers are hoping that their hosting of the world’s leading grand-prix monohull circuit will lead to other classes and regattas returning to the area. That is not to say that the leading lights of the 52 have not been here before. In 1992, just before he went on to win the Olympic 470 gold in Barcelona, Platoon’s Spanish strategist Jordi Calafat won the World title here with a day to spare. Second was none other than today’s winning strategist Michele Ivaldi and brother Matteo.

Many of the ex Olympic campaigners have sailed here in the past, as well as Spanish sailors who have taken part in racer-cruiser regattas here over the years.

Racing starts today, and as always we will have our eyes on the RSA team on Platoon which is helmed by Tina Plattner, hoping that she and her crew can stay ahead of a chasing pack. 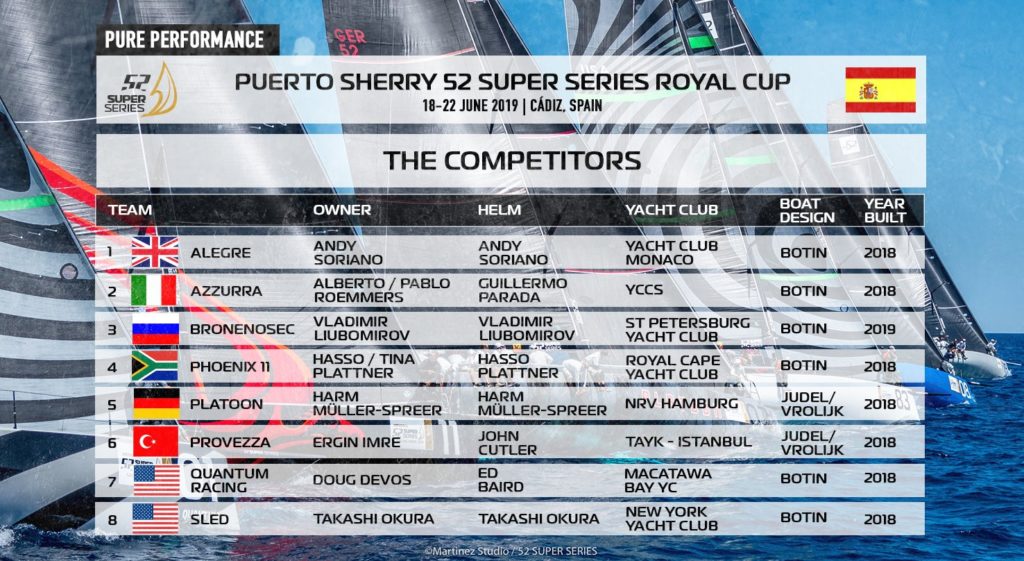