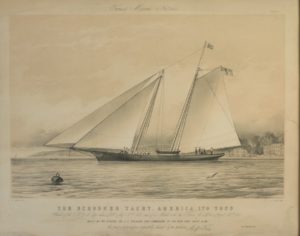 After a decade and a half away from sailing’s flagship competition, the New York Yacht Club, represented by Bella Mente Quantum Racing Association, will challenge for the 36th America’s Cup. The New York Yacht Club held the ornate silver trophy from 1851, when it was won by the yacht America (above), through 1983 -a run often known as the longest winning streak in sports. The Club regularly challenged for the trophy in the years that followed the historic loss to Australia II off the coast of Newport 34 years ago, but had remained on the sidelines since its last challenge with Team Dennis Conner for the 2002-’03 America’s Cup.

The challenging syndicate will be led by two of the most successful American yachtsmen of the last decade: John J. “Hap” Fauth and Doug DeVos. Since 2005, at the helm of three successive yachts named Bella Mente, Fauth and his team have reached the top of the podium in numerous distance and buoy races at venues in North America, Europe and the Caribbean. Fauth is a three-time world champion in the Maxi72 class.

DeVos and the Quantum Racing programme have set the standard for excellence on the 52 Super Series circuit, and its predecessor, the MedCup, with overall series wins in 2008, 2011, 2013, 2014 and 2016. One common link between the two teams is Bella Mente Quantum Racing Association Skipper and CEO Terry Hutchinson, a two-time Rolex Yachtsman of the Year and veteran America’s Cup competitor. Hutchinson, like Fauth, is a long-time New York Yacht Club member.

“The America’s Cup has always remained close to the heart of the New York Yacht Club, even in the years where we didn’t participate as a challenger or defender,” said Commodore Philip A. Lotz. “For this cycle, a lot of elements have come together in the correct way for the Club to enter another challenge. First and foremost is the desire of two great American sailors and businessmen, Hap Fauth and Doug DeVos, to take aim at sailing’s ultimate competition. We know they will mount a competitive effort that is respectful of the Club’s long history with the Cup and the competition itself. Second, we have confidence the Royal New Zealand Yacht Squadron, represented by Emirates Team New Zealand, will host a world-class regatta that honours the spirit, tradition and majesty of this great event.”

Fauth started sailing on Long Island’s Great South Bay as a young boy. He sailed through his graduation from Georgetown University, where he was captain of the sailing team, but put the sport on pause while he built a career and raised his family. He returned to the ocean in earnest in 2003 and bought his first large race boat in 2005. Much of his sailing over the past decade has been in the very competitive and technically demanding Mini Maxi/Maxi72 class.

“The America’s Cup is sailing’s most complex challenge,” says Fauth. “Winning takes a complete team effort, and I’ve always found tremendous satisfaction in bringing together a group of individuals in pursuit of one goal. With a return to a more traditional style of yacht and the windward-leeward courses with which the vast majority of racing sailors are intimately familiar, the 36th America’s Cup represents a unique opportunity to re-engage the grass roots of the sport and re-energize American sailing. A lot of what we’ve built with the Bella Mente programme, and what Doug and his team have created with Quantum Racing, will go into the foundation of this campaign. But there’s still a tremendous amount of work to do over the next three-plus years. I’m excited to get started.”

For Doug DeVos, sailing is a family tradition that started with his father Richard DeVos, the co-founder of Amway. Doug, the current president of Amway, and his siblings grew up sailing the Great Lakes on their father’s boats. These days, Doug can often be found sailing with his son and daughters, passing along the passion and skill he absorbed from his father. He’s also an industry stakeholder as an owner of Quantum Sails, one of the world’s leading sail manufacturers. The Quantum Racing programme has acted as a test bed for sail design and construction technology, with Doug DeVos and son Dalton DeVos serving among the team’s stable of helmsmen. An America’s Cup challenge is a natural evolution for the programme. It’s also a return to the competition for the DeVos family. Richard DeVos was the chairman of the New York Yacht Club’s America II syndicate, which fell just short of the semifinals in the 1987 challenger eliminations in Perth, Australia.

“Building Quantum Racing from scratch into a programme synonymous with hard work, team spirit and success has been tremendously satisfying, and I’m eager to take everything we’ve learned there and apply it toward sailing’s ultimate test,” says DeVos. “Between Hap, Terry and myself, we have the nucleus of a successful campaign, both on the water and off. We’re honoured to represent the New York Yacht Club in this historic competition.”

Even though entries won’t officially open until January 1, 2018, and the class rule for the AC75 won’t be finalized until early spring, there are many pivotal decisions ahead for this team. The return to monohulls will enable the team to pool the technological resources of two elite sailing programmes and get a jump on the competition.

“The decisions we make over the next six months will play a significant role in determining the ultimate success of our campaign,” says Hutchinson, who sailed as tactician for Emirates Team New Zealand in the 2007 America’s Cup match, the last to be contested in monohulls. “The early support of Hap, Doug and the New York Yacht Club puts us in a very strong position. But we can’t take anything for granted. The race for the 36th America’s Cup has already begun.”