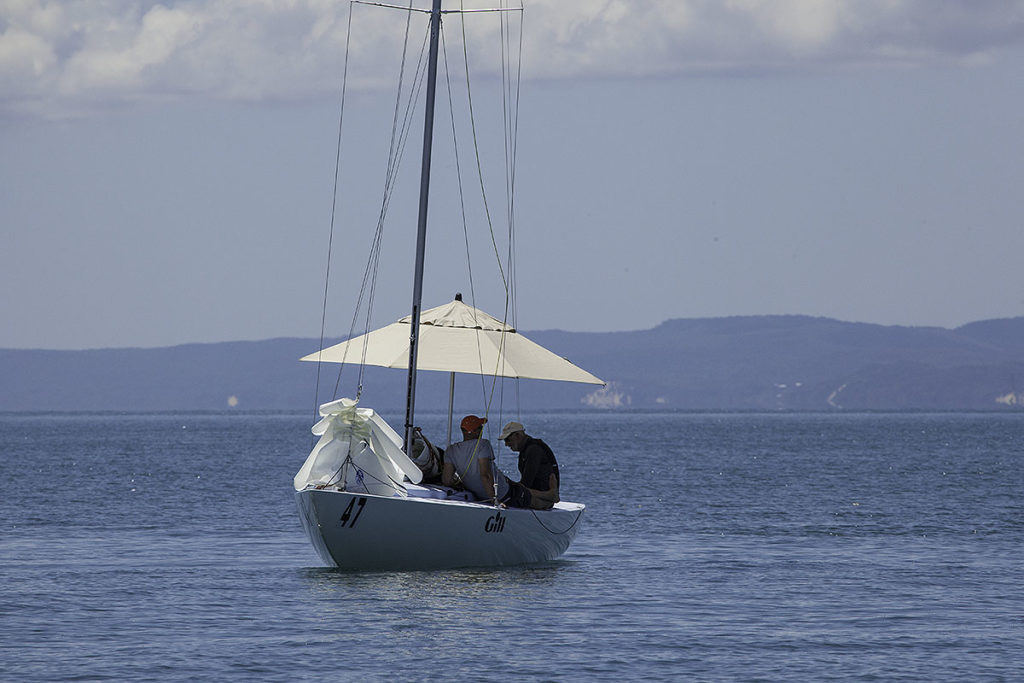 What to do when the wind takes a looong time to settle? Up with the umbrella for a picnic!
pic by John Curnow

The first day of any regatta is a nervy one, more so when the wind does not play ball – which is what happened in Brisbane this morning as just one late race was possible.

The Race Officers had been clear about the use of the U Flag, so it was good to see that the fleet adopted a no nonsense policy when it came to starting, even if it did mean the spectators were not going to see the usual three or maybe four goes at getting a clean start away. With a 1200m long start line and a 2.5nm haul to the top, all the patience had been used in the waiting, so it was totally clear that it was all about the business end of the game out on the water today.

Today the right of centre was favoured and would be at least 12 knots from the Sou’east, but at the windward mark the increased tidal flow and shallower water meant the waves did stack up a little bit more, especially once that tide fully turned and you had it competing with the wind.

95 Etchells is a lot of boats.
pic by Emily Scott Images

Ultimately the winner was ‘Havoc’, skippered by Iain Murray, with Grant Simmer and Richie Allanson on board. Of course, none of them really need any introduction, so in speaking with Murray afterwards he said, “It is nice to start the regatta, and sail well in the first race. There are a lot of anxious people out there, so getting a good start and first beat to windward, where you can find your rhythm without too much angst is a great way to begin a campaign.”

But our focus in covering this event is more on the lone former “Japie” in William Voermann who is fast becoming something of a ‘heavy’ in the class.

He has bought a good boat, and not just any old boat, but that of former America’s Cup winner John Bertrand, who also happens to be the defending Etchells World Champ. So Voermann has a great boat – and as valuable as the boat is, is the assistance, advice and coaching Bertrand has given him.

Voermann has invested heavily in the class, and undoubtedly he has a good crew too, although the names are not ones I know. He finished 9th in the Queensland Champs (pre-Worlds), and in this opening race he finished 24th in a fleet of 93 boats. Not too shabby at all.

I look forward to following Voermann’s progress this week and sharing it with you.

Incidentally, does anyone know whether the Etchells named ‘Trekka’ has a South African connection as the crew could well be “Japies” too. They are: Craig Coulsen; Terry Ellis & Carel Pretorious.