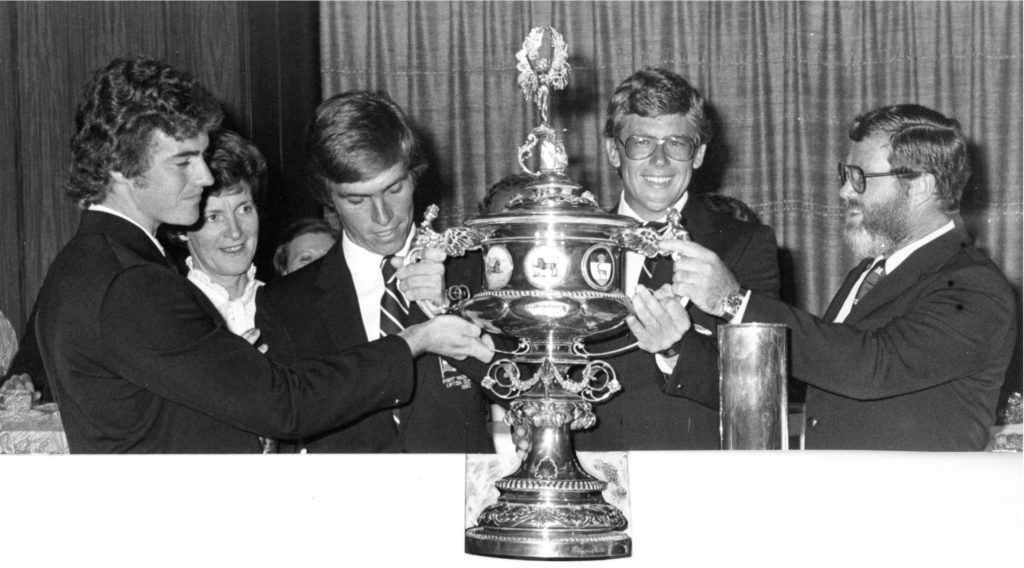 Having covered each and every one of the 22 Lipton Cup series of the “Elegant Era” of the 30-Square Metre class from 1952 to 1973, it’s time to move on to the “Modern Era” and specifically the Quarter-Ton era which was short-lived as just two series in those modern out-and-out racers was held.

1973 was the last series of the “Elegant Era”, and for 9 years the Lipton Cup was on display in the Royal Natal Yacht Club who were the last winners.

The Royal Cape Yacht Club Lipton Cup Trustees were keen to see the event revived, and in conjunction with the RNYC agreed that IOR Quarter-Tonners would be the class. Despite the fact that the RNYC had agreed that the event following the 1973 races should be held in Cape Town, the RCYC sportingly asked the RNYC to host the 1982 Lipton Challenge Cup in Durban as the last winners.

RNYC Commodore Guy Reynolds grabbed the initiative – and the rest they say is history!

Naturally there was good interest, and as we had fairly old Quarter-Tonners in the country there was opportunity for some state-of-the-art boats to be bought or build.

Two quarter-tonners were being built by Ton Cup Yachts, one for a syndicate headed by Rick Nankin with the design coming from Angelo Lavranos. The second boat was a Fauroux design being built for Tony Hurter for the PYC. Heading this effort was the owner’s representative Harry Ellens. The Fauroux design was a foam-sandwich construction, 7/8ths rig.

The Island Sailing Club was represented by Robin Thorpe who had formed a syndicate to purchase a state-of-the-art Ed Dubois boat.

The Sweet Pea was a popular quarter-tonner at the time so there were going to be several of those racing too.

Not everyone was enamoured by the choice off the Quarter-Tonner! This too can be read in the above link.

“After lying dormant for nine years, the Lipton Cup has been revived, to be once again the most prestigious and sought-after trophy in South African yachting” said the opening paragraph of SA Yachting Magazine.

“A whole week of no wind during Mainstay Week (the week prior) had competitors prior to Lipton Cup very uptight and tense, but fortunately by the time the event started there was wind and everyone had begun to relax and settle down to the task ahead of them – to win the coveted Lipton Cup” was how Yachtsman RSA magazine opened their editorial.

“Most of the competitors sailed Mainstay Week. Competition was close particularly amongst the three new yachts especially built for the event, while the Sweet Peas had their moments of glory and proved that sailed well they would be forces to be reckoned with. Various Sweet Pea owners had spent a great deal of time up-dating their yachts, ‘Sweet Pea’ itself with an increased rig, while ‘Xosha Moya’ sported a newly designed rudder. The previous week proved that ‘Royal Flush’ and ‘Red Flyer’ were good in light winds on all points of sailing, while ‘Fuel Free’ was felt to be excellent off the wind only.

The Yachtsman RSA editorial concluded as follows: “Before the next event a number of principles need to be established otherwise we could well find ourselves having to revive the event yet again.

“The question of which yacht to sail has caused endless discussion for months. During the racing it was blatantly obvious that there were only three yachts really in contention for the title, while the Sweet Peas were generally outclassed. ‘Mini Mouse’ did win a race, and ‘Xhosa Moya’ gained a second, not through superior boat speed but by good tactical decisions.

“Next year I doubt whether there will be many Sweet Peas competing so we are eliminating this event to an elite clique who have the money to build new boats on a regular basis, excluding those who cannot afford to keep pace with the IOR rule. This is not the American’s Cup, and let us not forget this:- Sir Thomas presented the trophy to promote friendly interclub sailing competition off the coast of South Africa. Accusations of incorrect ratings is not friendly competition. While we have this elitist attitude there are going to be a few ‘jockeys’ who win each year, while a good 80% of those eligible to compete will never get the opportunity to do so, purely because they cannot afford a new boat every few years. In terms of the Deed of Gift, it is an interclub event, so it should be sailed in a yacht that is common to all clubs and not yachts that a few syndicates or sponsors can afford.

Courses were interesting, yet not practical. 66% of sailing was off the wind and if we persist with these courses and IOR yachts, we will breed a funny shaped yacht suited only to the Lipton Cup. While these courses did test ones abilities at seamanship, i.e. running starts and finishes they did not provide an equal amount of windward and leeward work. These course must be updated to Olympic Triangles.

Want to know more? Read the reports as follows: