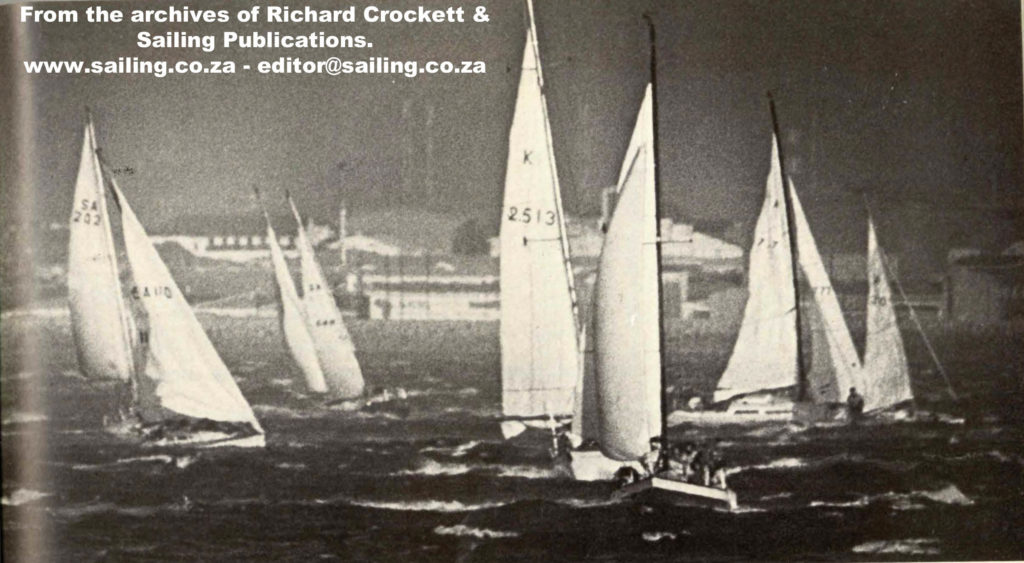 Yachts at the Table Bay start of the Dulux Double Cape race had to contend with gale force south easterly winds.

The headline really does no justice to the brave souls who took on the Double Cape race in 1982. Yes there was a gale, but the winds gusted at 50 knots and just 9 of the 64-boat fleet managed to “double the Cape”. That’s a massive attrition rate.

The best into to this race is from Yachtsman RSA magazine, written by John Fensham. It goes like this: “When they left moorings the wind was a gentle 15 knots south-east, perfect for a colourful spinnaker start to the second Dulux Double Cape Race. By the time they got out to the start line, however, the wind was already 20-25, and rapidly building to a raging 45-knot gale, gusting to 50-knots off Cape Point. The start was chaotic as crews battled to reef, change foresails and keep their heading. Less than six hours later Dr John Battersby’s Miura ‘Tamarin’ was smashed onto the rocks in Gordons Bay during a floundering search for the turning light. Dumped repeatedly across the Harmony Reef, the boat was a write-off, heavily holed. The crew and wet-suited divers spent most of Saturday helping to salvage whatever gear they could”.

Even more remarkable was the fact that L26s completed the course, the first boat home being the L26 ‘Hors d’ Oeuvre” skippered by Rick Nankin and the third boat home the L26 ‘Equation’ skippered by John Levin.

These are two “must read” articles for budding ocean racing crew and their skippers!