“Talking Sailing” From My Archives. 6 Days to the Rio Race Start 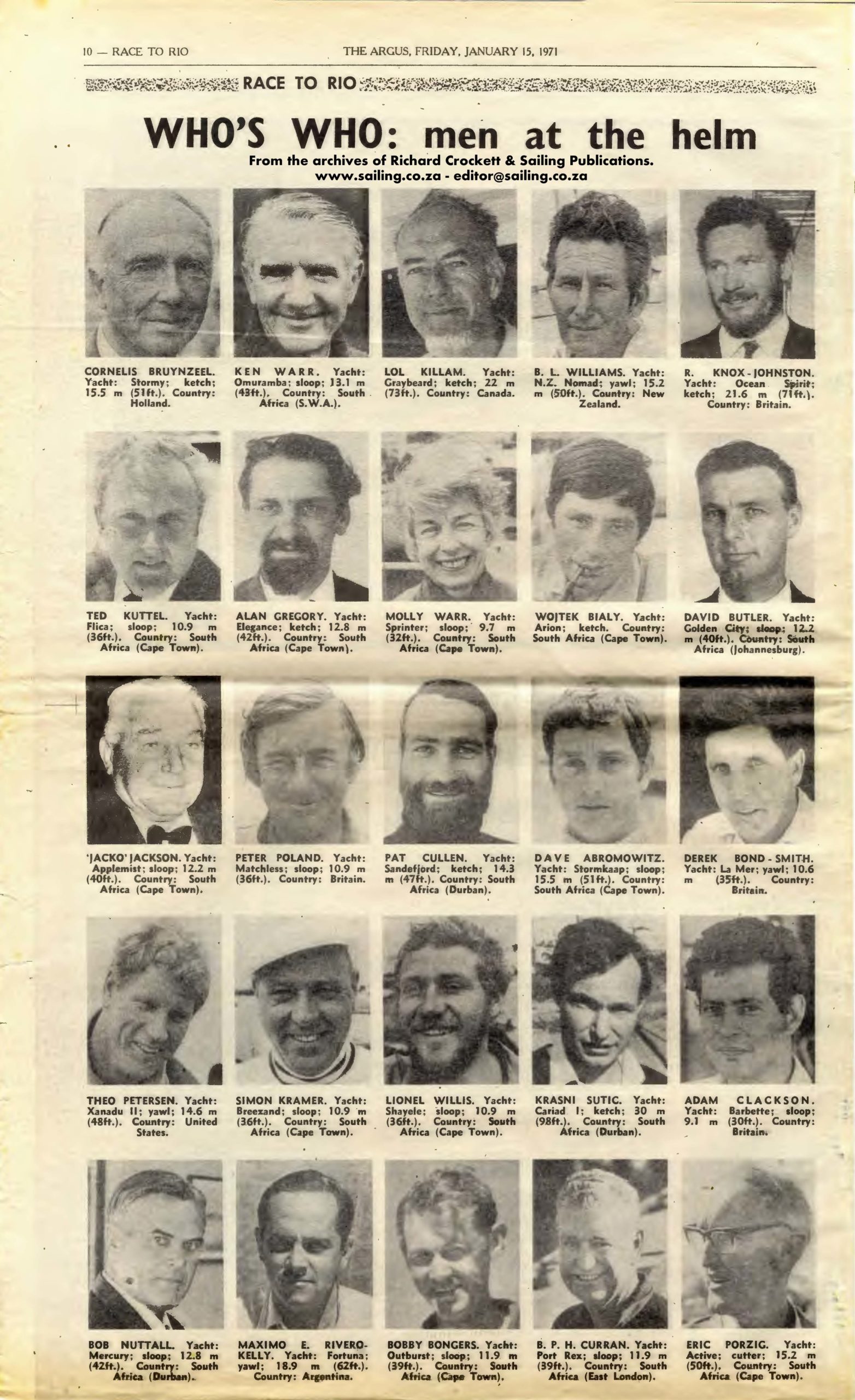 With just 6 days left to the start of the iconic 1971 Cape to Rio Race things would have, 50 years ago, been manic right now at the Royal Cape Yacht Club and its precincts. Every boat would have been in the final throes of their preparations and last-minute obstacles would appear and test the already stressed crews.

With so much information available to share this week, I have decided to start sharing this early as there are simply to many elements available to do it effectively each day. So today I will begin with the Supplement the Argus published on 15 January 1971. This is a 16 page supplement covering all aspects of the race, and which was digitally “stitched” together from four A3 scans for each page. That’s 64 scans to have reproduced this supplement. My thanks to Frans Loots for sharing his collection of cuttings with me, and in turn you too – the readers whom I hope enjoy this too.

In the hectic final week build-up period stress was something that not just the competitors felt, but also the media as they planned their extensive coverage leading up to the start, and more importantly for the start itself. There are many people who view the media as a bunch of beer-swilling layabouts who rarely work hard anyway. But let me assure you that this is not the case, as a dedicated newspaper person is anything but as suggested.

50 years ago the internet was a figment of a vivid imagination, as was the personal computer, so getting the news stories and pictures onto the page was a lengthy process that required ingenuity from the media people themselves.

The following report from the Argus in Cape Town, published the evening of the start, showed just how much planning went in to bringing the world the news of the start of this historic race. Under the heading “Crash, Splash Didn’t Stop the Argus” – this is what went into bringing the start day news:

“A photographer overboard in the middle of the Rio race start, a motor-cycle crash and some carrier pigeons missing at sea all failed to prevent The Argus from providing its readers with more than 70 pictures published in various editions throughout Saturday.

“The photographic coverage included no fewer than nine special picture pages, overtaking one another with fresh photographs as the day progressed.

“The drama of the photographer overboard was no accident. He jumped into Table Bay from the fast-moving ‘Cariad 1′ and, still clutching his photographic equipment, was pulled aboard a rescue launch moments later.

“The Argus Chief Photographer, however, took an unplanned flying fall from the pillion of a motorcycle. He was rushing film from the docks to his newspaper when a car was in collision with his dispatch rider, a volunteer from the Nomads Motor-Cycle Club.

“No one was seriously hurt – as the chief photographer proved by running (with a limp) the rest of the way.

“Twenty-five homing pigeons carrying exposed film were released at sea and battled against the south-easter. Five got through before The Argus closed for the night, but most were too late home. More are on their way today.

“To cover the start of the Cape-to-Rio yacht race The Argus used a team of reporters, five photographers, a helicopter, a speedboat, two motor-cycles and the pigeons.”

So there you have it as it was back in those days! Today the journalists and photographers would be sending off their pics via email from the press boats as they milled around, or were on they way back to shore. It seemed like so much more fun in those days!