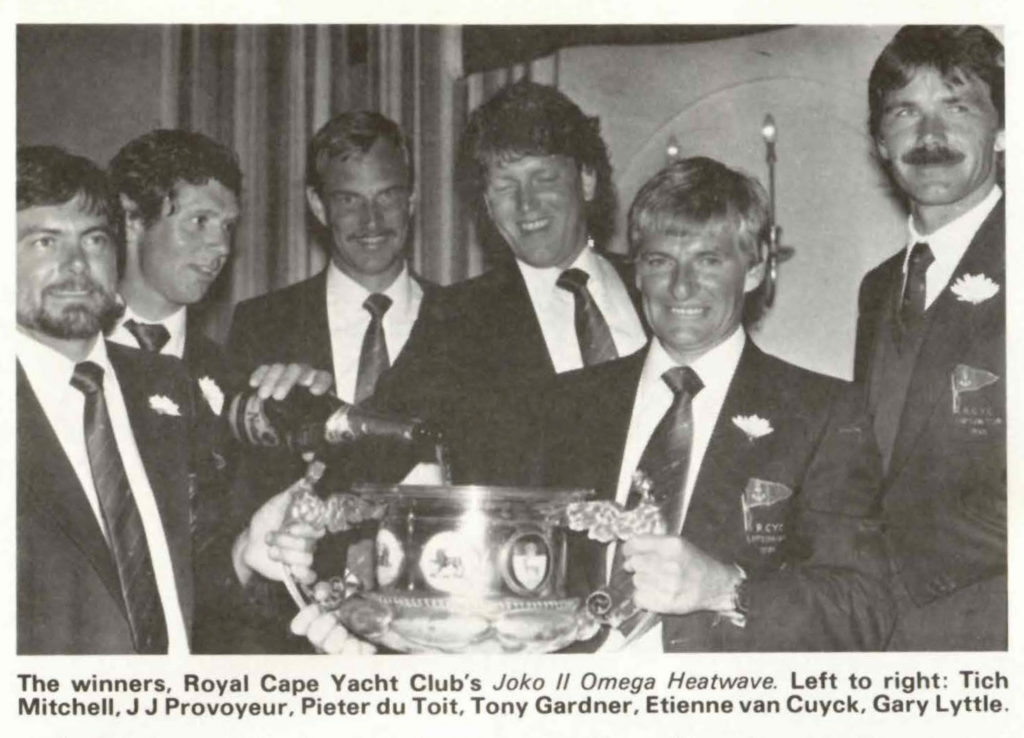 Reading the reports from 1987 again it looks as if this was an event looking for someone to take it by the scruff of the neck – and win it. Race after race it lumbered on until Etienne van Cuyck won the coveted cup again simply by sailing consistently.

This is what the SAILING Inland & Offshore Magazine reporter had to say in his opening paragraphs: “Overall strategy or tactical opportunism? Consistency or brilliance? The safe play or the wild gamble? These are questions which face every skipper and crew in a major regatta, and the way they are resolved ultimately decides the winner.

“The 1987 Lipton Challenge Cup sailed in Table Bay in August was no exception. Etienne van Cuyck’s successful defence of the coveted cup was the result not of exceptional sailing performance or even of occasional brilliance. In fact, on the surface of it, his performance was pedestrian in the extreme, his best showing against some very tough competition being a third in the first race. Time and again he was shown to be sailing well below his potential, ‘Joko II’ oversheeted, throttled and slow against superb showings by Chris King (‘S.C. Stainless Steel’, ZVYC), Harry Ellens (‘NEB Sport’, PYC), Joe de Kock (‘Judron’, HBYC), and others. But even sailing off his top form, Van Cuyck was consistent enough to gain, and maintain, the upper hand.

“Etienne admitted after the regatta that the only race he sailed well was the first. After that, tension and reaction to the pressure of defending the cup screwed him and his entire crew up so tight they were unable to make sound judgements – or to make Joko ll get up off her transom and move! And it seemed to get worse with each successive race. Their team manager J.J. Provoyeur aged ten years watching the nerve-wracking regatta from the press launch Jacqueline. But he need not have worried. Aware that all was not well, Etienne nevertheless showed great courage just “hanging there”, ensuring that while he seemed unable to make up any time, he never fluffed it enough to drop below fifth or sixth position. This was particularly true of the second and third races, in which windshifts made a mockery of any attempt at consistency. And in the end, Etienne’s overall performance was exactly in accordance with the strategy decision taken before the regatta started: Sail conservatively, keep out of trouble, maintain a position never lower than fifth in the fleet.”

SA Yachting magazines reporter, Hilda Hermann, said this: “The L26, designed by Angelo Lavranos, is a much smaller boat than originally envisaged by Sir Thomas Lipton to compete for the Lipton Challenge Cup – but the spirit he wanted to foster among yachtsmen has certainly come to the fore. Since the advent of the L26 class in the Challenge. no club has been successful in holding the Cup for more than one year. But as in the past three Challenges. the final result were hanging in the balance until the completion of the last race.”