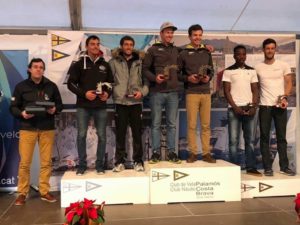 Asenathi Jim & Alex Ham (right) on the podium in Spain.

Yesterday in Palamos, Spain, Asenathi Jim and Alex Ham plucked a great Christmas gift from under the tree when they finished 3rd overall in the Christmas Regatta for Olympic classes.

Alex Ham sent this brief report: “The medal race was tough, we were leading by quite a margin, but confusion caused by the Race Committee not displaying the correct course saw us lose out. Second place was within our reach if we won, but we had to settle for third overall.”

As Ham concluded, “In the end a really positive result and a good international debut for the combination”.

These two guys are looking towards an Olympic campaign, and this, their very first international regatta result shows they have the ability to mount a highly successful bid for Olympic medals and glory.

Go guys, just go and do it!