Blast from the Past

I have selected some pics from the Vaal Dam, and hope that some of the stalwarts of those waters can give some info on the boats and people depicted. 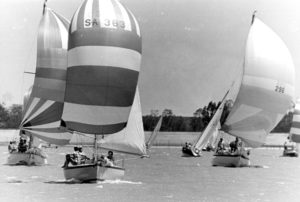 Pic 1. There is no caption on this, so any info from readers will be appreciated. 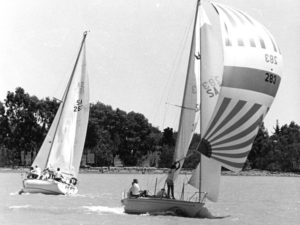 Pic 2. This is captioned as follows: “Impi just ahead of Aries at the windward mark during the first race”. I assume that this may be during the Minister’s Cup? 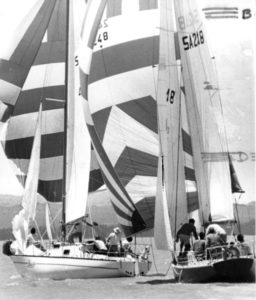 Pic 3. This is captioned as follows: “T Davies in his Lello 34 flying his large spinnaker to blanket P Stein at the helm of the Miura Rhapsody. Again this may well have been during the Minister’s Cup. Are either of the people mentioned still sailing? 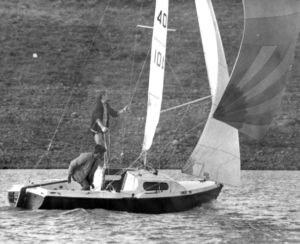 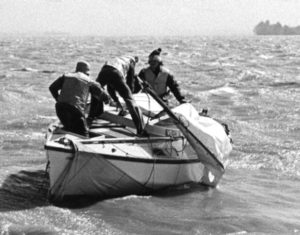 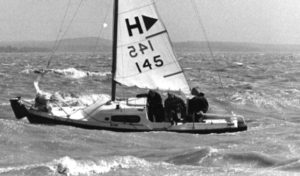 Pic 6. The caption says: “The jib stowed and main reefed, this Hunter skippered by R Jones makes heavy way. This was a common sight during the first race of the Minister’s Cup”.

Dr Tim Kerry
(Pietermaritzburg and Hunter 19 sailor – not in the running for foiling!)
May 2017 pg 28
Regarding your photographs in the May issue, I think the lady at the helm was Kate Steward. I cannot remember what she did, but was taken at RCYC.

With the upcoming America’s Cup, my wife Claire came up with an interesting quip. The battle of the giant foiling catamarans is “Foils War” – Inspiration coming from the British TV program Foyle’s War with Michael Kitchen. I thought that was quite clever. You may use it if you wish.

Chris Talbot
June 2017 pg 13
Chris called me to say that in reference to pic 1 (the Dragon Galatea), the second Dragon in Durban was Trio. She was owned and sailed by Leo Caney. Talbot also said that Caney had a ‘thing’ for Enterprises and regularly managed to collide with them in races on Durban Bay. He said that the crew had joked with Caney that they would ‘notch’ his tiller for every Enterprise hit!