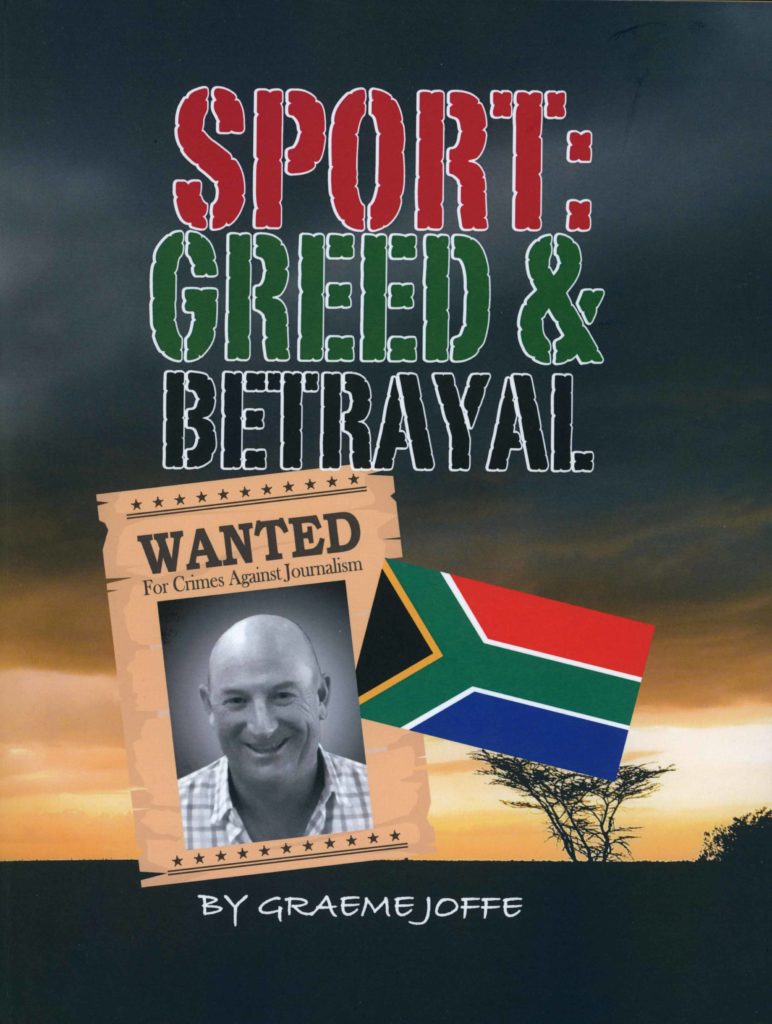 In his introduction the author says that “Sport has been my life”.

One can see this clearly when reading the book and seeing what he has done in sport, from being a player to being a media man. Personally I don’t know the man, but have read and listened to him over many years, and always found him to be a great journalist. Being so inter-twined in sport, it’s hardly surprising that he came across nefarious deeds by sports’ administrators, and after asking pertinent, and often very pointed, questions, he did not receive answers.

Over time he became the hunted with a target on his back, forcing him to flee the country for his own personal safety.

I would like to say that every single sports’ administrator in our country should hang their heads in shame, but won’t, as there are some who do try and make a difference!

It is quite clear from Joffe’s book that all is not well within the sport, and that some administrators, even at rarified levels within government, continue to get fat at the expense of the athletes – sportsmen and women who put their hearts and souls into representing their country, and then are told that there are not sufficient funds to assist them.

I have first-hand knowledge of athletes who have been made promises that were never fulfilled, or who had to push really hard to get their just dues. It leaves a bitter taste for all concerned – although most probably they had absolutely no idea as to the extent of the greed and betrayal.

It’s heartbreaking as they are made promises that are never worth a jot, and then have to fight for every single cent promised. And all the time the ‘fatcats’ get fatter by planning more and more elaborate schemes to milk the coffers for their own benefits, including spending tens of millions of Rands on a lavish sports banquet!

It’s natural that when your place at the trough is being threatened, and the ‘comforts’ and ‘bonuses’ of stealing from athletes makes one so comfortable, that the source of discredit becomes threatened.

And some journalists in the pockets of the ‘fatcats’ simply refuse to acknowledge the truth in case their perks dry up.

Joffe mentions journalists by name, both good and bad. I have had some limited dealings with several, and now know why those experiences were not always satisfactory. Some have even been involved in our sport (sailing).

The fact that not a single organisation has come out to assist in exposing corrupt officials is mind-boggling, especially as hard evidence was given to the National Prosecuting Authority, the Public Protectors office and more.

Our government should be ashamed of itself, as too should the sports whose administrators screw the system at the expense of the athletes.

Dale Granger, a ‘sometimes’ sailing correspondent in Cape Town and rugby journalist said this of Joffe’s book: “I take my hat off to Graeme Joffe, the lone South African sports journalist in the wilderness with courage to expose corruption and cronyism as a South African version of David Walsh. If there was a Pulitzer prize for courageous sports journalism in SA, Joffe would be the only candidate.”

Robert Marawa, Annette Cowley-Nel and Ruda Landman are a few who have shared their thoughts and been quoted about this book.

In closing, it’s probably pertinent to end with this: “It is not often that our speakers get a standing ovation; you have certainly given us food for thought.” Dave Penrose, Honorary Secretary (Johannesburg Sportsman’s Club).

Does our sport get a mention? You’ll have to read the book to get the answer!