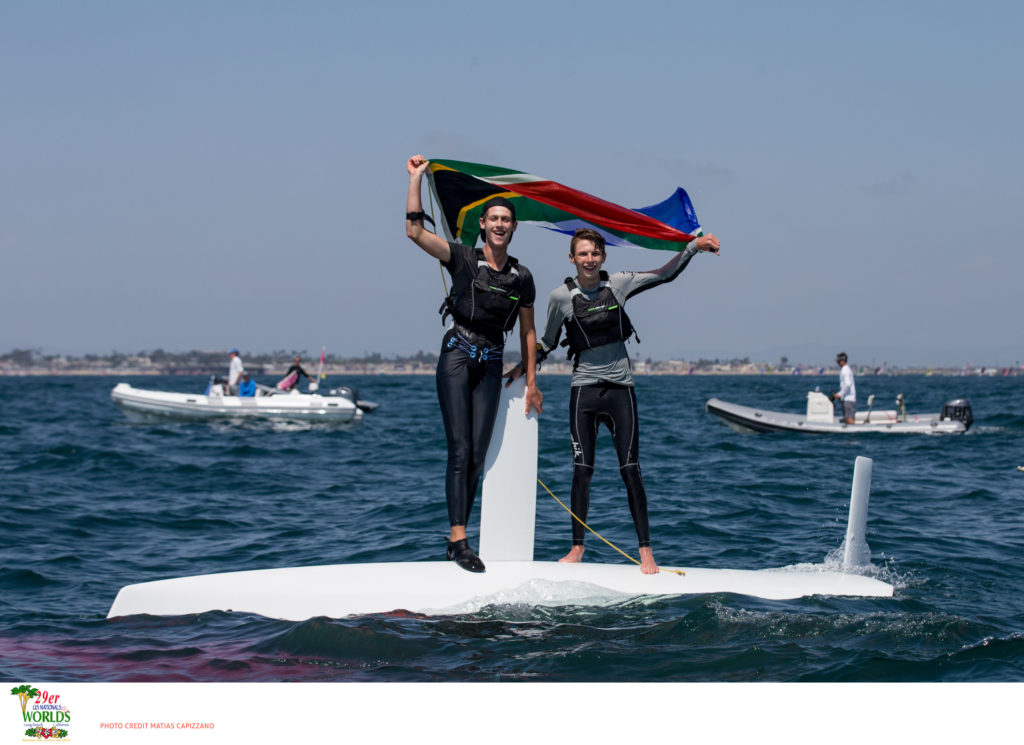 Benji Daniel & Alex Burger – World Champions in the 29er Class have today qualified South Africa for a place in the 49er Olympics later this year.
pic by Matias Capizzano

As shutdown happened they were about to head off to compete in the final Olympic qualifying regatta to secure a sailing berth for South Africa, when they were literally left high and dry as they were unable to compete internationally, nor practice on local waters. It seemed then that their Olympic dreams may have been shattered, but as these guys are made of stern stuff, and as good old South Africans, they made a plan to ensure that their Olympic aspirations and qualification plan stayed on track.

With no one to compete against here, they did as much sailing as possible alone simply to stay in tune with each other and the boat so that when the travel opportunity opened up, they could get back to the “hot spots” where all the top Olympic hopefuls were training.

They managed to be on the last flight from South Africa when yet another travel restriction was imposed. They had to quarantine in Dubai for two weeks before they could leave for Abu Dhabi where they were training for six weeks. From there they headed to Muscat where the final qualifier regatta was being held. At great expense to themselves, as theirs is a personally funded campaign, they spent as much times as possible training alongside some of the best funded teams in the sport of sailing, and today finished the Mussanah Open Championship Regatta at the Millenium Resort, Mussanah, in Oman.

One needs to put into perspective just how well funded their competitors are as in an Olympic four-year cycle, some teams have a budget of 5 Million Euros from their federations!

They started well and were on the podium (top three) at the end of every day, except the final medal race today when they dropped to 6th.

But most importantly they have qualified South Africa to send a 49er team to compete in the Olympics. Well done guys – your perseverance, passion and dedication to making your Olympic dreams a reality now has just one final hurdle left before you board the plane to Japan.

That hurdle is SASCOC, our Olympic Committee, as it is they who have to select Benji and Alex as part of the South African Olympic team for Japan.

Let’s hope that SASCOC understand just how much effort and sacrifice these two young guys have put into their campaigning, and just how tough it has been for them.

These are two tough and talented guys – SASCOC please don’t shatter their Olympic dreams at this late stage and ensure that they are on the Olympic flight to Japan.