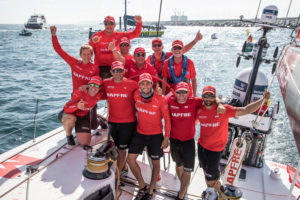 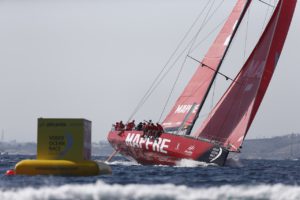 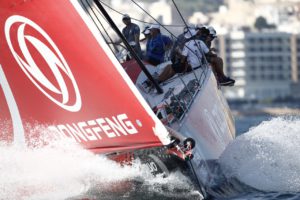 The local heroes on Xabi Fernández’s MAPFRE were a popular winner in the first point scoring race of the Volvo Ocean Race.

Fernández and his team made a bold call at the start to duck behind the entire fleet in order to sail up what turned out to be the favoured right hand side of the course, coming from behind to earn a narrow lead at the first gate.
“It was pretty clear from Joan (Vila) and Rob (Greenhalgh) that we wanted to hit the right side of the course in the first upwind looking for more breeze,” explained Fernández.

“Our intention was to start on port, but Pablo (Arrarte) saw the gap himself when Brunel did a poor tack and they couldn’t accelerate so we want for the cross and we had plenty of room and once we hit the right everything went well.”

MAPFRE then managed to stretch out to a lead of nearly one-minute at the bottom gate, giving them a lead they would enjoy the rest of the way.

“The truth is it hasn’t been an easy race, but we took a bit of a risk at the start,” Fernández said after the finish. “We saw the gap in front of Brunel and we went for it. Everything went really well.”
In fact, the Spanish team sailed a flawless race, in terms of strategy and execution, and were never threatened after grabbing the lead at the first mark.

But behind them, it was a hard-fought race. Sun Hung Kai/Scallywag was strong on the first leg, but dropped back over the course of the race. In contrast, Dongfeng Race Team fought up the fleet to grab second place, battling with Vestas 11th Hour Racing and Team Brunel who were trading places throughout the race.

“There was a lot of action! MAPFRE played their own game alone, but behind them, we had a big fight for second place. It’s good, it’s good,” said skipper Charles Caudrelier on Dongfeng Race Team.

“We showed how we can sail well, after having not such good results in the last few days. It’s great that we managed to come back and get this result.”

“It was a very exciting first In-Port Race for us,” said Charlie Enright, the skipper of Vestas 11th Hour Racing. “They’re always really close. You know, when you’re racing these 65-foot canting keel boats around a one-mile track it gets interesting, with a lot of exchanges and big headsails and a lot of grinding. We did some good things and some bad things and got third place. All in all, not a bad way to start the campaign.”

“I had a bad start and that put us on the back foot,” said Bouwe Bekking the skipper of Team Brunel. “But we sailed the boat very nicely. All in all, we’re pretty happy with how we sailed today.”
Sun Hung Kai/Scallywag made a late gain to grab fifth over team AkzoNobel with Turn the Tide on Plastic never recovering from a poor first leg.

“It was okay. Fifth’s not great but it was okay. We were second at the top, but we just made one mistake on the first run and it cost us. Basically, it was good. Amazing to be racing here in Alicante,” said David Witt, the skipper of Sun Hung Kai/Scallywag.

Dongfeng
“It was good to get back to the top of the fleet. I’m very happy about this and well done to MAPFRE.” said Charles Caudrelier

Racing in front of thousands of spectators watching from on shore and on a flotilla of spectator boats, Charles Caudrelier and his crew on Dongfeng sailed a smart race to finish second behind MAPFRE skippered by Xabi Fernandez.

“We worked hard and we needed a good result because the last one – the Prologue – was not as good as we expected. It was good to get back to the top of the fleet today. Even though the conditions were a bit difficult, we managed to do that.” The Frenchman said the key moment in the race came on the second downwind leg of three, when he and his crew got past Vestas 11th Hour Racing to take second place, a position they held to the finish. “We passed Vestas downwind with very good speed,” Caudrelier explained. “After that, we created a small gap between us and them so it was easier because we could sail without disturbed air from the other boats.”

Chinese sailor Chen Jinhao, also known as Horace, said the race was all about trying to complete manoeuvres and tactical options smoothly. “When we started we were not in the lead, but we learnt and improved a lot. We are trying to keep it simple and avoid making any mistakes,” he said. “We tried to focus on boatspeed and tactics. Pascal (Bidégorry) made a good decision and then we gained a bit each time until we finished in second. It was a good start and now we are looking forward to the first offshore leg.”

French crew member Marie Riou was relieved to emerge with a strong result on a day when it was easy to lose position in light wind conditions. “It was a good day because we finished second,” she said with a broad smile. “We had a nice start. It was a bit tricky on the first upwind and first downwind legs but we stayed focussed throughout the race. We managed to comeback and finished just after MAPFRE, so it is a good result for us.”

Team Brunel
Fourth Skipper Bekking was pleased with the result: “Of course we would have liked to have been on stage, but a fourth place is okay for now.”

Bekking: “The way we sailed was a lot better than in the practice race yesterday. That is one of the most important things. We made fewer mistakes, but there is still a lot to improve. We had a bad start, but the speed of the boat was good. At one point going downwind, we even overtook all the boats except Mapfre. ”

“Mapfre had a good start. They have just sailed well and are currently the team who won the most in the preparation. They are the team to beat, but let’s wait until the first stage starts really. ”