Volvo Ocean Race. Who Would Want To… ? 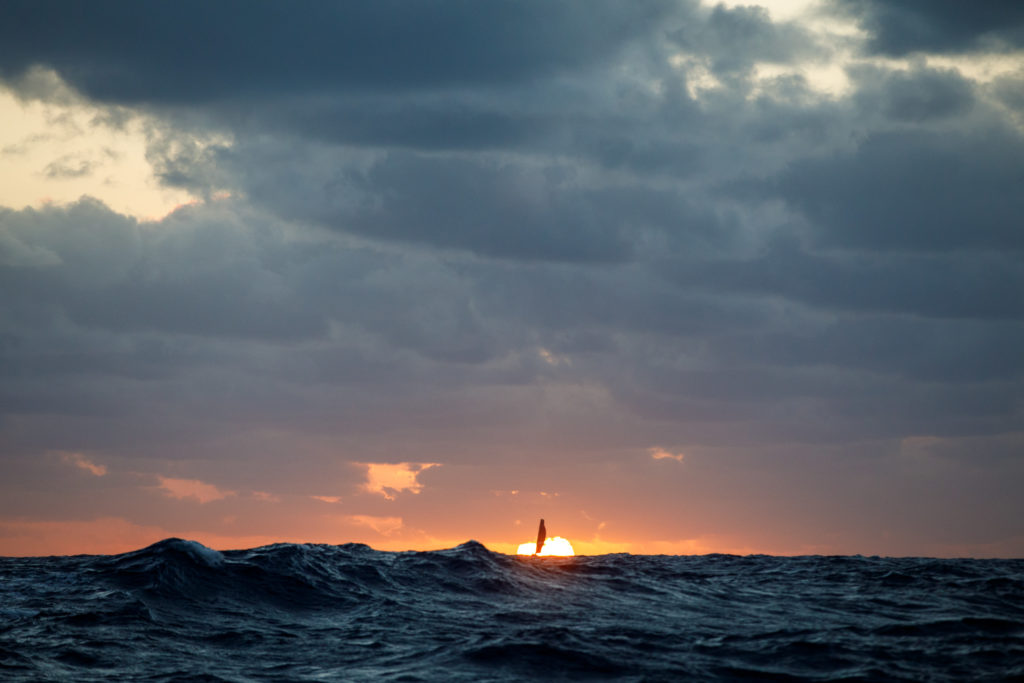 Vestas chasing down MAPFRE as she sails into the sunset.
pic by Amory Ross/Volvo Ocean Race

Who in their right mind would want to be the navigator, weather guru and tactician on a Volvo Ocean Race boat?

Many hands will undoubtedly go up, yet it has to be one of the toughest jobs in the race. No, it’s not necessarily physical, although these guys do also sail the boat, but it takes many hours of brain power, tons of time pouring over GRIB files, looking at ocean currents – and much, much more.

The role these guys and girls play in this race has come sharply into focus since the start of leg 4 from Melbourne to Hong Kong where the fleet split soon after the start resulting in two distinct groups and strategies – either East or West. 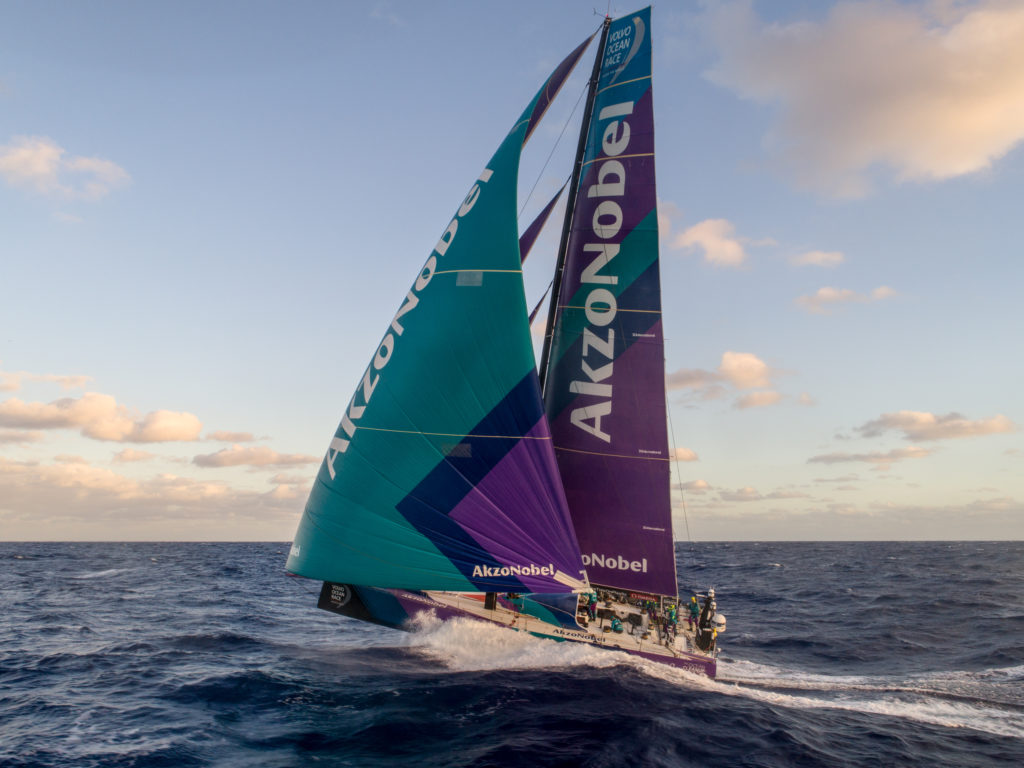 A great pic of AkzoNobel taken from a drone flown off the boat by the OBR.
Photo by Sam Greenfield/Volvo Ocean Race

The day following the start a west to east split of 80 miles developed as the teams draw level with Sydney, with Leg 3 runners up Dongfeng Race Team nudging ahead by a whisker at that early stage, taking the Easterly offshore route. 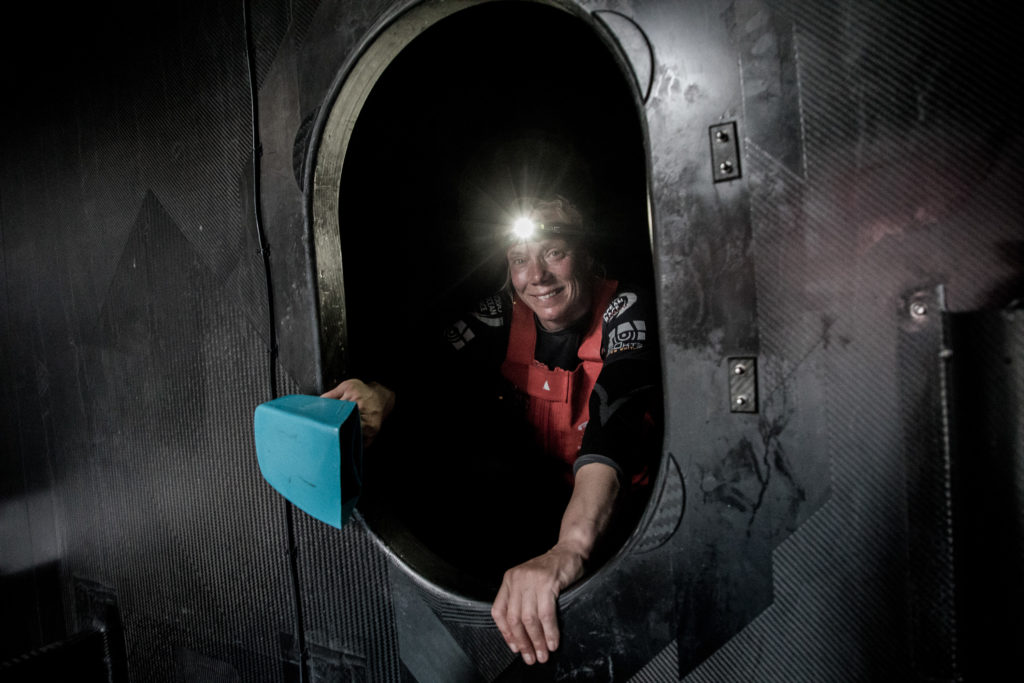 Annemeike Bes always smiling even when bailing out the bow on board Sun Hung Kai/Scallywag.
Photo by Konrad Frost/Volvo Ocean Race

Further inshore having chosen the western option, Vestas 11thHour Racing and overall race leaders MAPFRE were carving out a route just 20 miles off the coast, while Turn the Tide on Plastic, the most easterly team, were a further 70 miles out to sea.

Chris Nicholson, watch captain on team AkzoNobel, revealed that the trio to the east were searching for an extra boost from a reverse current.

“We’ve had our eye on an eddy for about a week now, and we always said that if the breeze lined up then it could be an option,” he said. “It’s obviously what Dongfeng, Turn the Tide and us have gone for. It’s good for the team to be out at the front but the key will be keeping that up day after day. We’re unproven in that department so far.”

A day later, three days into the race, Dongfeng Race Team and team AkzoNobel claimed the first bragging rights of Leg 4 by choosing the Easterly option as they built a healthy 34nm lead at the head of the fleet.

Although it’s still early in the 6,000-mile stage, these small gains have given the top teams a welcome boost.

“Now there is a big gap between us and MAPFRE and Vestas 11th Hour Racing,” said Franck Cammas, stepping onboard Dongfeng for Leg 4 as navigator to replace the injured Pascal Bidegorry.

“We were happy with our choices yesterday. We thought about the risk before the start, and this is the routing we wanted. We followed our plan, and it’s good for our confidence.” 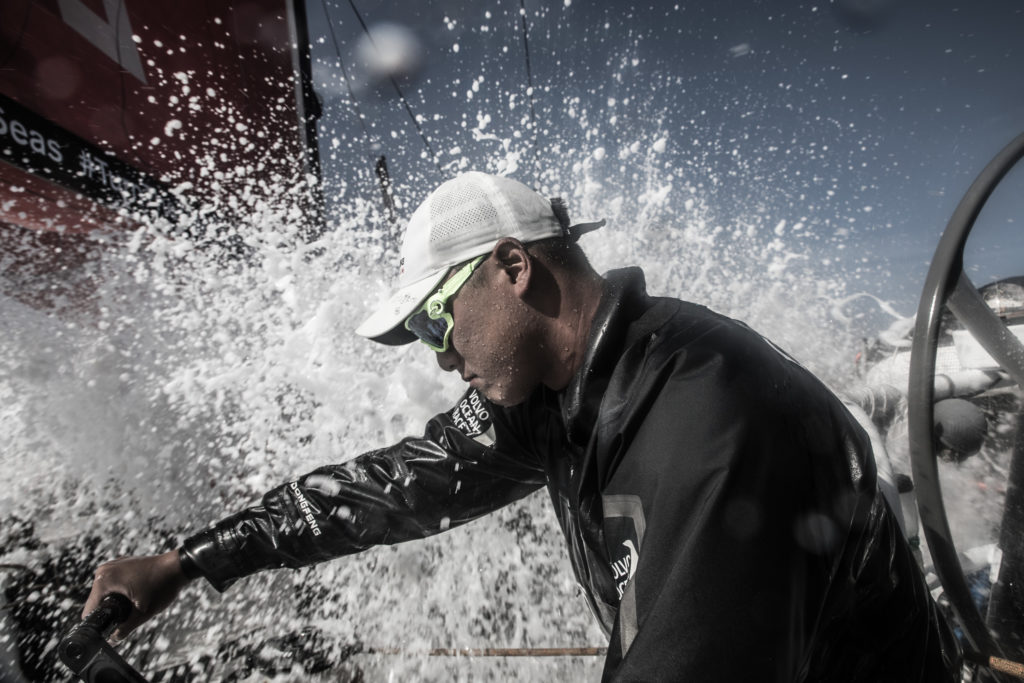 On board Dongfeng. Horace before the impact.
Photo by Martin Keruzore/Volvo Ocean Race

Spirits were equally high on team AkzoNobel, especially given the challenge they faced in Leg 3 when a bad gybe saw a section of their mast track ripped out.

Simeon Tienpont’s crew were just 2.2 miles behind Dongfeng as the fleet drew level with Brisbane.

“I feel really good that we’re able to compete with the likes of Dongfeng and MAPFRE, and actually faster at times,” said AkzoNobel’s Chris Nicholson. “The question now remains if we can maintain it over the distance. They’ve proved that they can consistently go at this level day in and day out. 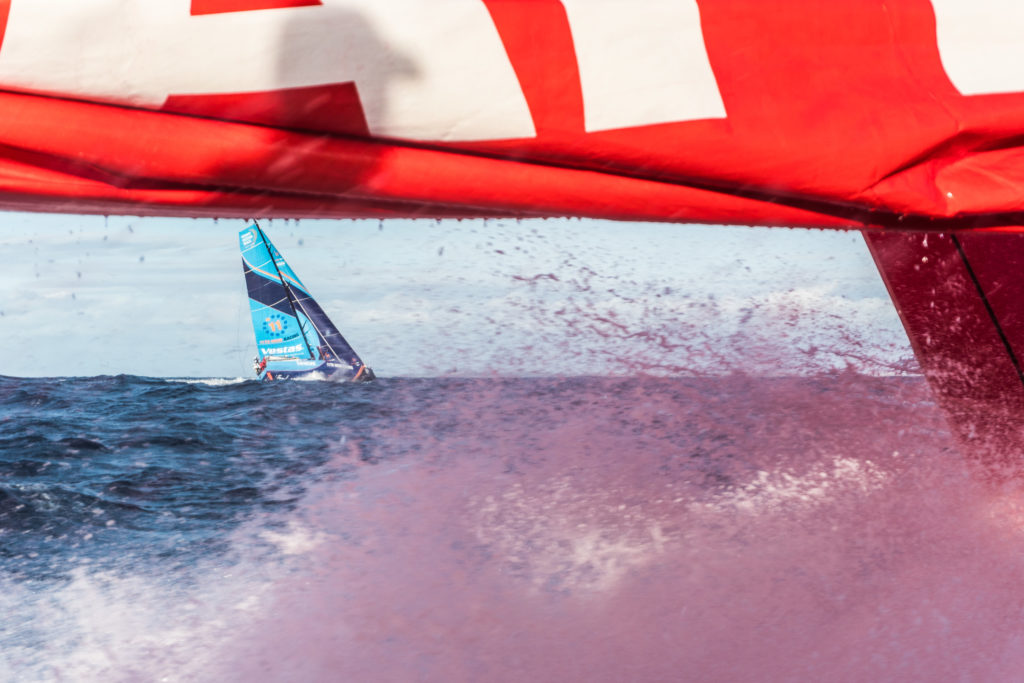 On board MAPFRE with AkzoNobel in sight.
Photo by Ugo Fonolla/Volvo Ocean Race

“That’s something that we’ve yet been able to maintain. They’ve proven themselves to be a solid package all around. I think we can’ but we’re yet to push ourselves that hard for that long.”

And Dee Caffari, skipper of Turn the Tide on Plastic, tweeted: “Two good position reports make for a happy crew.” 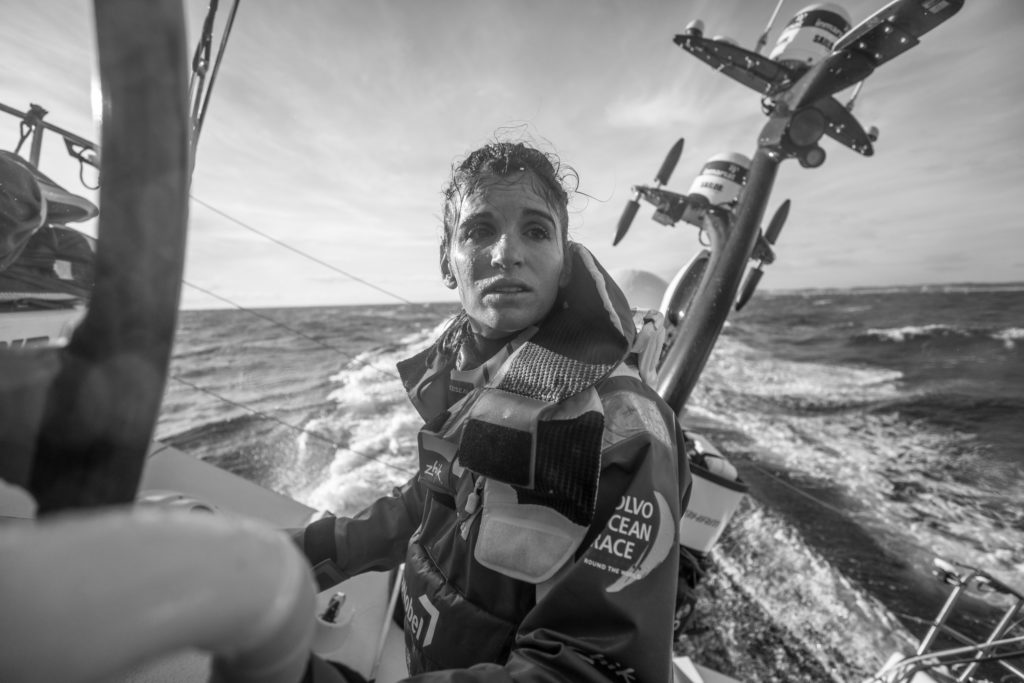 Aboard AkzoNobel. Life is tough on these boats.
Photo by Sam Greenfield/Volvo Ocean Race

While boat speeds were around the 20-knot mark, the forecast suggests the wind will become lighter in the coming days which may be bad news for the leaders but a chance to catch up for the chasing pack.

The key for those inshore will be the moment at which they gybe back onto port and reposition themselves better in the west to pick up better breeze.

“At the beginning we were not expecting to lose much but things haven’t gone our way the last 24 hours,” admitted Xabi Fernández, skipper of fifth-placed MAPFRE, some 37 miles off the pacesetters.

“But one thing is for sure, we keep fighting every wave and we know we will have opportunities to come back in this leg. There is so much left and it is so tricky.” 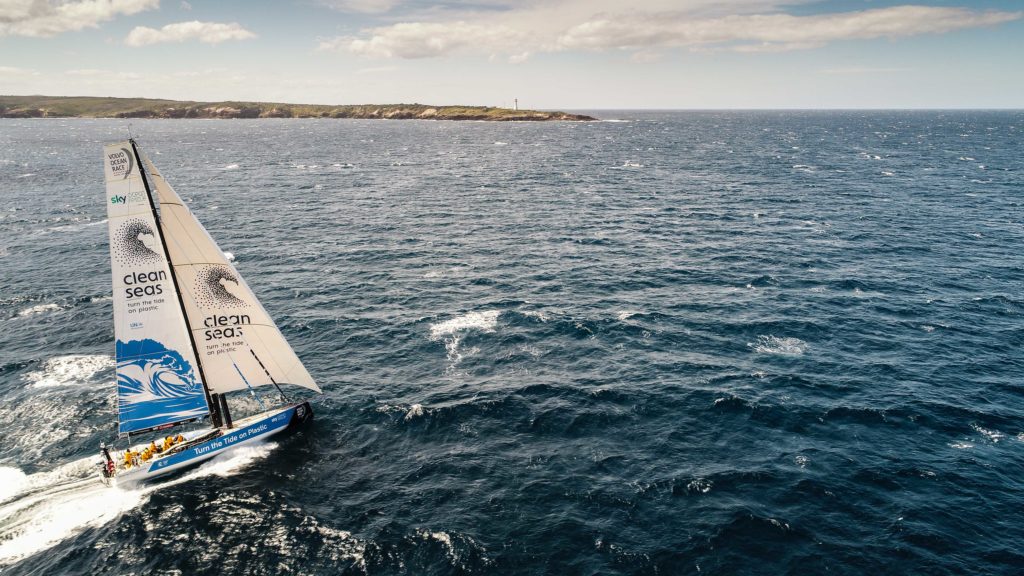 Turn the Tide on Plastic OBR flying the Drone in Disaster Bay! Risky business one may say!
Photo by Brian Carlin/Volvo Ocean Race

Well this morning (Friday 09h00) the latest position reports show that the East/West divide has closed dramatically, and that Dongfeng and Vestas are now to the west of the fleet, further inshore, and that their lead has been dramatically diminished with third placed MAPFRE just 7nm behind. Plus she has had the best 24-hour run by far in the fleet of 338nm.

It’s a game of cat ‘n mouse at the moment, and will be for some days yet. But what is certain is that there will be no let up on any boat, and that these VOR65s will be pushed to their limits and beyond.

It’s going to be a fascinating duel.