Volvo Ocean Race. Who Will Win? 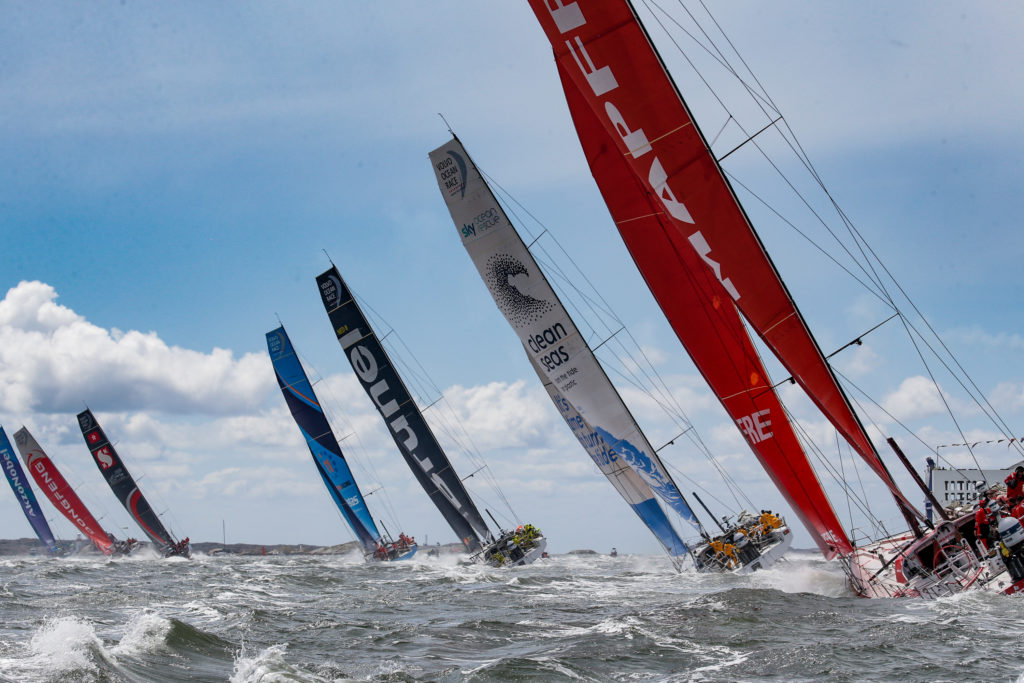 The start of the final leg with MAPFRE, one of the favourites to win overall, right at the back!
pic by Jesus Renedo/Volvo Ocean Race

The talking point around the world right now amongst those following the race is who will be crowned the overall winner – as one of 3 boats can win?

At yesterdays final leg start it looked as if Brunel and MAPFRE had literally shot themselves in the foot as they jockeyed for position at the pin end of the line, harassing each other and taking their eyes off the third player in this equation – Dongfeng.

MAPFRE was squeezed out of the start and had to restart – and trailed the fleet in the opening stages, while Dongfeng grabbed the early initiative.

This is a winner-take-all leg – so one would have expected a bit more discretion from Brunel and MAPFRE at the start, especially with so much at stake, and especially as Dongfeng has always been a thorn in their sides.

For those supporters of MAPFRE, while sweating a little, they may have been quietly confident as Xabi Fernández and his crew have an uncanny ability to be able to turn on the afterburners at crucial times as the crew collectively knuckle down and sail out of their wet smelly socks. They have dug deep on several occasions in this race, and have reaped the rewards with their new never-say-die attitude. Remember the finish in Newport? 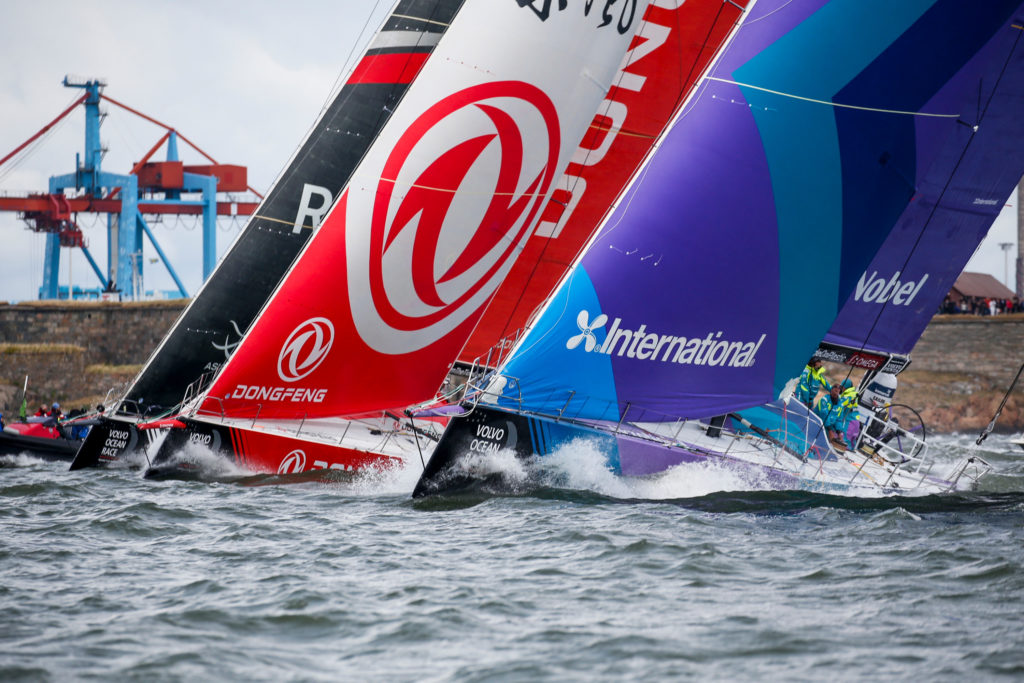 They’re away on the final leg of this round-the-world race.
pic by Jesus Renedo/Volvo Ocean Race

And true to form they shrugged off their poor start and quickly started climbing the leader board, and right now (Friday morning) they are in second spot, and according to the tracker are fast closing down the distance between themselves and Dongfeng who leads. MAPFRE is currently sailing about 3 knots faster than her rivals.

With 700nm-plus still to race, it’s anyone’s game, but an early advantage certainly helps especially as the most hungry of the 3 potential winners may well take the honours.

Here’s what the 3 potential winning skippers had to say just prior to the start:

“We’re excited to get going on this leg. It looks interesting and this is the kind of leg I really like,” Caudrelier had said before the start. “It’s reminds me of when I started to race, this kind of coastal racing. We’re ready for the fight and we know it’s going to be a big fight for sure.”

Bekking’s Team Brunel is the form team, having won three of the last four legs. They will need all of that ‘flow’ as the skipper calls it, to grab the title in The Hague.

“We believe we can win. I believe we can win,” Bekking said on the dock, pre-start. “It’s a fantastic way to finish this race. It’s my eighth time and we think we can we do it. As a team we’re still growing and we’re confident we can beat the two red boats.”

For MAPFRE the intensity of the final leg is something skipper Xabi Fernández welcomes.

“We’ve prepared all we can and we have plenty of confidence,” Fernández said. “We’re happy to have a little bit of everything in the forecast for this leg. There won’t be much of a watch system for this one – all hands on deck!”

There’s another battle at the opposite end of the leader board where David Witt’s SHK/Scallywag leads Dee Caffari’s Turn the Tide on Plastic by just one point. Caffari has made it clear she would love to overhaul the Scallywags on the final leg of the race.

“We need to beat them with a boat or more in between us,” Caffari said. “We do not want to finish at the bottom of the leader board… So we have to sail our boat confidently and at the level we know and make sure we’re in amongst the rest of the fleet.” 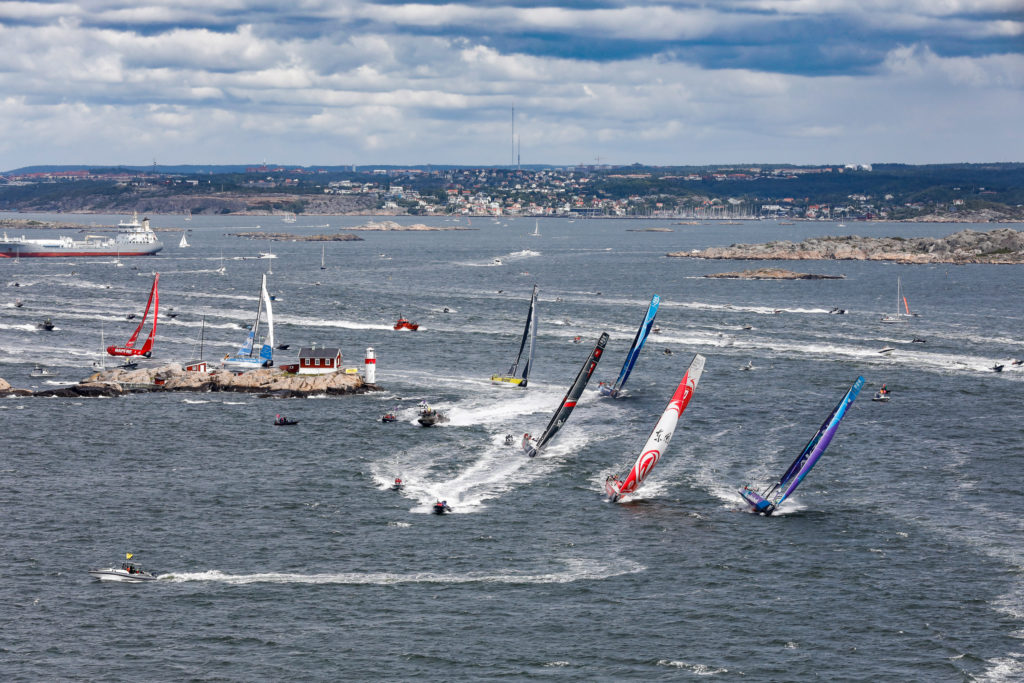 Clearing land and the spectator fleet before settling down to a very tough and tactical final leg.
pic by Ainhoa Sanchez/Volvo Ocean Race

The race course for Leg 11 takes the boats west out of the islets dotting the entrance to Gothenburg before turning north to head to a turning mark just off the coast of Norway. Then, it’s a dive south to round a mark near the Danish city of Aarhus, followed by a return north around the top of Denmark before racing south to The Hague. Numerous tactical options are in play throughout the leg, with the weather forecast promising strong winds early, and lighter conditions near the finish on Sunday.

“This leg is going to be about speed, managing the transitions, having the right sails, making the right choices,” Caudrelier said. “It’s a complete test. We will have all different kinds of windspeed and wind angles so it’s going to be the best team who has learned the most and can take the good decisions under pressure who will win.”