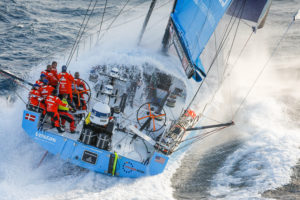 It is never easy to predict what will happen in an ocean race, but if one were to go by the ‘form book’ and the race ‘favourites’, the fleet positions may not well be what they are right now!

Vestas 11th Hour Racing skippered by Charlie Enright heads the fleet and has a 22nm on second placed MAPFRE. Surprisingly at the tail of the fleet are Dongfeng and Brunel. 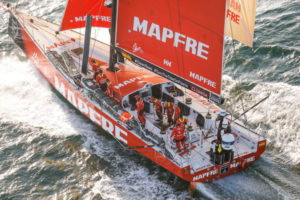 MAPFRE has sailed through the fleet into second spot.
pic by Ainhoa Sanchez/Volvo Ocean Race

Vestas is navigated by Simon Fisher who has already done 4 laps of the planet. Plus he was the winning navigator in the last race when he took Abu Dhabi to victory. His tactics saw him take Vestas towards the Spanish coast on the first night where they benefited from favourable conditions and emerged in front of the fleet.

“We took the inshore route with a good angle and we know we crossed ahead of the fleet when we converged with them again,” explained Enright. “We like our sail set up and we feel like we’re going through the water well.”

22nm back is Mapfre. Her crew must have been pushing her exceptionally hard, and her navigator Juan Vila, considered one of the world’s best navigators, returns to this Race after a 15 year absence, and is now on his 5th lap of the planet. He would have been working overtime on his cramped navigation area as his team did not have the best of starts and played catch up for most of the first 24 hours. But they have good boat speed and have steadily overhauled the fleet to now sit in second spot, and plan their attack for taking the lead.

Will they catch Vestas? Ocean Racing is a fickle business, so anything is possible before the finish of this leg in Lisbon.

Big questions are being asked of Dongfeng and Brunel. Dongfeng was tipped by the TV commentators during the start coverage as the boat to beat on this leg. Brunel was definitely one of the hot favourites – yet both languish at the tail of the fleet at this stage. 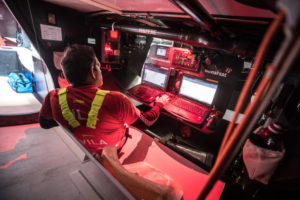 At the nav station aboard MAPFRE.
pic by Ugo Fonolla/Volvo Ocean Race

Time will tell if they have problems or breakages, or that they simply suffer from some poor decision making.

“Last night we lost a lot. We are in 5th or 6th position, which is hard for us,” said Chen JinHao (Horace) on Dongfeng. “Pascal and Charles were working all night so we can be faster. It was a bad night, but sailing is sailing. We can come back!”

The leaders are under no illusion as to what awaits them after the passage through one of the busiest stretches of water in the world – the Straits of Gibraltar.

“The race won’t be won or lost (in the Strait),” Enright said. “And there’s a big patch of light breeze waiting for us on the other side.”

The concertina effect may bring the backmarkers back into the hunt. Let’s wait and see.